Share All sharing options for: 5 POINTS: Time to Save the Program -- South Carolina 24, Kentucky 17

1. The debate is over. Garcia starts. Finally. Longtime readers know about my past skepticism of THE SAVIOR OF THE PROGRAM, Stephen Garcia. Even before Saturday's win over Kentucky, though, any doubt was gone. Garcia is more accurate than Chris Smelley and has a better ability to take off when things break down and not, you know, fumble the ball.

Those lines, by the way, don't include Smelley's two interceptions and his fumble or the fact that Garcia didn't turn the ball over. Spurrier, for his part, now agrees: Garcia will start against LSU. 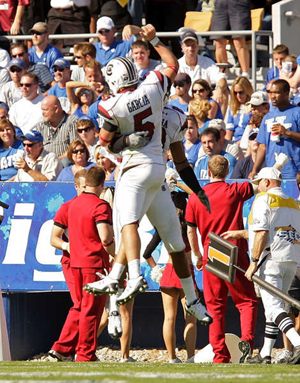 Congratulations, you're the starter. Don't get too comfortable.

Perhaps we expected too much from Smelley after his performance in Oxford last week. Redshirt sophomores do not, as a rule, magically get better. But Smelley is hardly done. He knows better than anyone that, with Spurrier at the helm, a new starting quarterback is only an interception or two away.

2. Defense shuts the door. The defenses both played pretty well, as we expected. But Ellis Johnson once again showed a penchant for adjusting well at halftime. The Wildcats gained 173 yards through offense or penalties in the first half; they picked up 61 yards in the second. Kentucky's offense -- sans penalties -- totaled just 218 yards, though after the game you have to question whether they're even as good as South Carolina is (and the jury's still out on that one). Jasper Brinkley returned to form with eight tackles and Chris Culliver had two picks and a TFL.

3. A wild first half. The first half was the most bizarre 30 minutes of football I've ever seen. Turnovers, blocked kicks, inaccurate throws, big kick returns. During the first 10:27 of the game, no one scored. Twenty seconds later, it was 7-7. South Carolina took the lead for the first time after an 81-yard blocked FG return in the second quarter. Kenny McKinley took over the career receptions lead, then gave the ball away on one of the most bizarre fumbles I've ever seen -- the ball must have gone 10 feet in the air. You want to say it should have been a 28-3 Gamecocks lead going into halftime, but a Kentucky fan could pretty much say the same thing.

4. Good day: Kenny McKinley. Aside from the fumble, McKinley had a great day, proving that he's back from his hamstring injury, setting the record and generally showing why the Gamecocks missed him so much.

Betwen McKinley's return to form and Garcia's play, there's reason to hope the offense has turned a corner.

5. Bad day: Ryan Succop. It hurt to watch Succop go through what he went through today. One of the few things you could rely on last year and this year was that Succop would usually hit the key kicks, the 2007 Tennessee game being the notable exception. But Succop had five FG attempts Saturday, all of them important; he converted once. It didn't end up costing South Carolina the game. And one hopes it doesn't cost South Carolina the reliability of Ryan Succop. The good ones recover; everything we know about Succop tells us he's a good one.

GRADE: B-
The Gamecocks won and found a quarterback-of-the-future-for-next-week in the process. Yes, the first half was sloppy, but the team rebounded and won the game with a much crisper second half, at least after Garcia came in. But any satisfaction with the result comes with a caveat: Play like this against LSU in the first half, and there will be no reason to show up for the second.