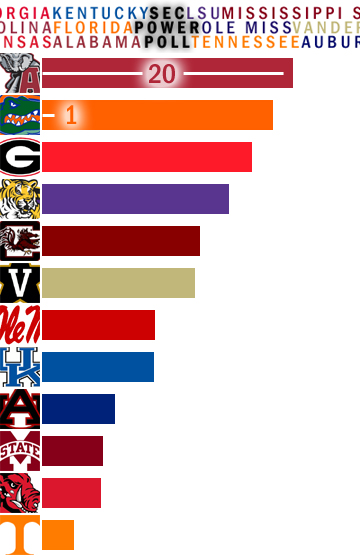 Alabama has seized control in stunning fashion. Even if the lone voter who left the Tide out of their top spot had not even ranked Alabama, Tuscaloosa's Team would still be No. 1.

After that, Florida, Georgia and LSU come in 2, 3 and 4, with Florida being one of the big movers of the week (up 3) after knocking LSU from one side of the Swamp to the other.

The other big mover is -- ooh -- South Carolina, which edges Vanderbilt for 5th by five points. Ole Miss and Kentucky also have a heated battle for 7th underway; one point separates the two.

Auburn falls after its loss to Arkansas, and the events of the weekend allow Mississippi State and the Hogs to take the lead in the race away from the "Worst of the Best" Cup, which could easily go to Tennessee this year.

Voters explain it after the jump.

How Tide fans spent their bye week: 1) Watch Auburn get knocked off by Arkansas; gloat. 2) Watch LSU get pounded by Florida; gloat more. 3) Get on the Internet and buy SEC championship game tickets.--Hey Jenny Slater

Tuscaloosa restaurants had to shut down early this weekend as Andre Smith and Terrence Cody had a Saturday afternoon off.--Tide Druid

I'm still waiting for the other shoe to drop -- I don't think any team is making it through the S.E.C. gauntlet unscathed -- but, for now, ‘Bama unquestionably rules the roost.--Dawg Sports

If you have to pick a midseason game to finally get both your offense and defense clicking, a night home game against the defending national champions is actually a pretty good one to pick.--Hey Jenny Slater

Great, now they've found a way to get their Olympic sprinter tailbacks involved. That's just what the rest of the league needed.--Joe Cribbs Car Wash

That's how that offense is supposed to work. The Gators embarrassed a defensive line that was hyped as one of the best in the history of college football with wide line splits and miniature running backs. It was scary stuff.--Georgia Sports Blog

This game did not impress me. Only Tennessee's mistakes made this look respectable. Are the Dawgs offensively challenged?--A Sea of Blue

Defense is nowhere near as good now without last years playmakers and former DC Pelini.--Garnet and Black Attack

The defensive breakdowns against Auburn and MSU are looking less like isolated instances and more like an ongoing syndrome. And Auburn's collapse pretty much takes their "marquee win" off the board.--Hey Jenny Slater

Now you know how Georgia fans felt at halftime of the Alabama game. LSU isn't that bad, but they have some flaws (passing and stopping the pass) that may not be fixable. That D line's reputation took a big hit giving up over 250 yard rushing.--Georgia Sports Blog

The 'Cocks have worked their way up to .500 in SEC play and are one win away from bowl eligibility. Looks like they're back to the old "suck, then get much better the rest of the season" blueprint.--Hey Jenny Slater

If a Vandy punt doesn't land on the back of a 'Cock leg and if Davis doesn't fumble inside the Georgia 5, Spurrier's quite possibly undefeated and circling the date with Florida for an SEC East title.--Joe Cribbs Car Wash

Spurrier finds a quarterback ... which now makes SC a threat.--A Sea of Blue

Did Vandy revert to being Vandy or was this a 'true' upset?--Garnet and Black Attack

I said last week that the game against Mississippi State sounded like a setup. Now that they've had their trap game loss, can they sustain the early season success?--Year 2

Maybe that non-offense isn't enough to win SEC games after all. Let's try a QB change...--Save the Shield

Can Ole Miss get 4 more wins and get to a bowl game? They have the potential but not the discipline.--Orange and Blue Hue

Are they really the seventh-best team in the league right now? I guess so, but this is looking more and more like a down year for the conference.--Year 2

The Ole Miss Rebels have been playing well but have struggled to find consistency. This week, however, I think they will find it -- by losing to Alabama. Still much better than 07.--Gate 21

If their offense was half as good as the D it could be a special season for UK.--Leftover Hot Dog

U.K. has evolved into a moderately consistent middle-tier program with not only a ceiling but also a floor. The Blue and White's frequent displays of something reminiscent of actual defense -- not seen in the Bluegrass State since, oh, the Bear Bryant era or thereabouts -- have reminded us all that, in fact, you can't spell "Wildcat" without "D."--Dawg Sports

So when Arkansas loses to UK this weekend, is that the point where we say that Auburn is just that bad?--UK Wildcat Country

I had the Tigers winning the West. After losing to both Vandy and the Hogs, I could, just possibly, be wrong.  Auburn has yet to figure out  you have to score points to win games.--Gate 21

Tuberville looks like a dead man walking.--A Sea of Blue

Good win for the Bulldogs Saturday. The offense held on to the ball and the defense held Vandy to basically nothing. Laid the successful blueprint for Vandy -- Don't beat yourself.--The Dead Guy

Sly said their week off gave them a chance to start the season anew. Unfortunately the SEC Power Poll still recognizes their "old" season, but they still have a better win than any of the bottom three.--Save the Shield

Putting up so many yards against Auburn is impressive. Letting Auburn score more points on you than anyone else in the conference thus far is, however, not.--Red Solo Cup

The Petrino Era begins in earnest as the Hogs make a bold leap out of the cellar.--Razorback Expats

And finally, even the numbers agree: Tennessee is the worst team in the SEC. Pass the moonshine.--Rocky Top Talk

Is the Fulmer death watch available as a widget yet?--UK Wildcat Country

Fulmer's seat just assumed the temperature of a supernova.--A Sea of Blue

The Vols are a total mystery. They have good running backs, a solid offensive line, a great defensive line and Eric Berry. How can all of that look so, so bad? I don't know, but I like it.--Georgia Sports Blog