1. 39 yards. If you want to know why the Gamecocks lost this game, it's all wrapped up in that number: 39 yards. As in, South Carolina's rushing total Saturday night. When you take out Stephen Garcia's numbers, it gets even worse: Mike Davis, Eric Baker and Bobby Wallace combined for 24 yards. If you think anyone can win with those kinds of rushing numbers -- well, you're delusional.

By way of comparison, 2007 Texas Tech -- by all accounts a decent team that relied almost entirely on the pass -- average 59.3 ypg. Hawaii last year? 72.6 ypg. If you can't even gain 50 yards on the ground, you're going to lose, unless you're playign an opponent whose defensive coordinator is an idiot.

To say that Spurrier's offense is a passing attack misses the point. (Errict Rhett, for example, led the SEC in rushing two of the four years he played for Spurrier.) You have to have a running game, or the defense can do exactly what LSU did Saturday night -- blitz or find other creative ways to put pressure on the quarterback.

Or don't, really, since the offensive line couldn't do much pass protection even when LSU was doing some pretty vanilla things up front. Garcia was sacked six times, and his mobility saved him from the same fate a few other times. 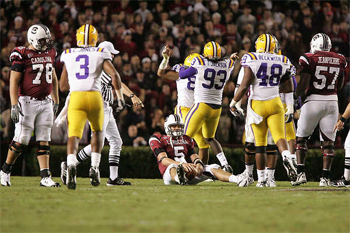 When you can't run, this happens.

Yes, Garcia gave up and took off running too early on some plays, but that didn't hurt the rushing numbers, and all it really did was ensure that LSU was always ready for the run even when they weren't afraid of it.

2. Garcia's the guy. Not that it much matters what I think, since Head Ball Coach has already said Garcia will start, but it's the right call. Whatever you think of some of the youthful mistakes Garcia made -- and there were some -- the reason to keep Garcia in there is wrapped up in the Spurrier quote that Mike Patrick and Todd Blackledge kept using: "He gives us hope."

We've seen the ceiling with Chris Smelley, and nothing against the guy, but he's a good backup and not a season-long starter. Garcia reminded us Saturday that there will be some bumps in the road -- but, with him, there's hope.

3. Fixing Succop. It's hard to say just how much Ryan Succop's missed field goal in the second quarter affected this game. On the one hand, South Carolina lost by a touchdown and the ensuing LSU drive, which ended in a touchdown, started on their own 22, about where it would have following a potential touchback. On the other hand, it would have given the Gamecocks the lead earlier and would have made it a two-score game (20-10) at the half, potentially altering the psychology and play-calling for LSU. 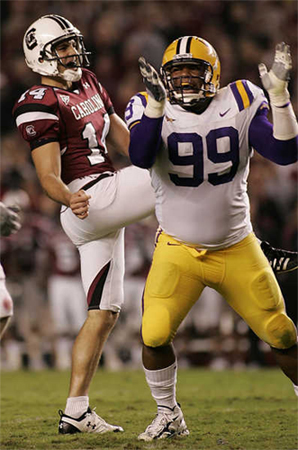 Succop's struggles, though, could cause problems down the road -- either by costing South Carolina in close games or by forcing the offense to take too many chances on fourth downs. It's in his head; we all know this guy's leg, and he can kick the ball with strength and accuracy. But sometimes the injury to the brain is the hardest one to treat.

4. Defending the run: FAIL. The good news: The Gamecocks defense held RB Charles Scott, one-time Heism@n dark horse, to 61 yards rushing. Bad news: The rest of the LSU offense ran for 103 yards. In all, the Gamecocks surrendered 164 yards on the ground, which allowed LSU to chew up clock and dramatically shorten the game in the decisive fourth quarter. (LSU's time of possession in the fourth? 11:39.) It wasn't a Tyrone Nix-level breakdown -- nothing can quite top those -- but it was still a disappointing effort from Ellis Johnson and Co.

5. The big picture. Let's not kid ourselves: Despite the optimistic predictions offered here and elsewhere, this was always going to be a difficult game for South Carolina to win. LSU is one of the most talented teams in the country, they just lack some experience this year. The Gamecocks still have a chance for an eight-win season; Tennessee's blowout win over Mississippi State was much closer than it appears, Arkansas' strength is passing the football, and that should play into South Carolina's hands, and Clemson continues to tank no matter whom they fire. This is still the same team it was a week ago; the upset just didn't happen.

GRADE: C
South Carolina put itself in a position to win, the Gamecocks just couldn't do it when it mattered. You have to lose these games before you win them, and while we're all sick of losing them, there's still reason to believe South Carolina will win them one day soon.