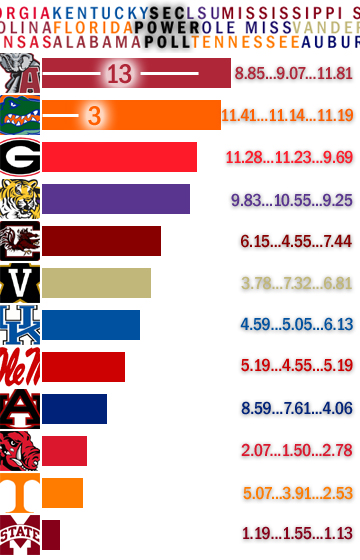 Voter turnout wasn't great this week, but it doesn't make much difference: the Top 6 remain unchanged from a week ago. Kentucky and Ole Miss flip and Mississippi State drops all the way to the bottom and now has such a firm grasp on 12th place I'm not sure it can be dislodged.

Other interesting notes this week: Alabama and Florida captured all the first- and second-place votes between them. Mississippi State got all but two of the last-place votes; the others went to Arkansas.

The numbers out to the side are the average points per week in Week 1...Week 4...Week 8. You can see Alabama's relentless rise, Florida holding incredibly steady, Vanderbilt moving up and Ole Miss being right about where we expected them to be.

To put in context how bad Tennessee has plummeted since Week 1, note that the Vols earned 5.07 points per ballot after they lost to UCLA. They're now at 2.53. Auburn, though, has had the largest percentage drop: 53 percent.

Enough from me. Let's here from the voters.

Dr. Jekyll and Mr. Tide. Since the UGA game, Alabama has outscored its opponents 69-3 in the first half but been outscored 61-13 in the 2nd half.--The Dead Guy

Best first half team out there. Seriously Tennessee, just forfeit at the half. Please.--Roll Bama Roll

If they can't get it together in the second half, they will end up losing a game soon. Is it possible to go into a prevent offense?--Mississippi State Sports Blog

The break actually came at a good time for the Gators. They might not be completely healthy against UK but [the break] gives some players a chance to be back by the Georgia game.--Orange and Blue Hue

Will be interesting to see if they can continue the offensive momentum they generated against LSU. Oh, and on the off week, Tebow healed a village of malaria.--Pelican State Sports

While I believe the Bulldogs have a better overall resume than the Gators, the reality is that the Saurians appear to have overcome their early season sluggishness. Urban Meyer's team put together what can only be described as a complete game against L.S.U., which is more than may be said of the ‘Dawgs in any of their non-patsy outings.--Dawg Sports

Georgia began the year with enough talent to challenge for a National Championship but are now an offensive line injury away from grabbing fans and issuing them uniforms.--Orange and Blue Hue

To most, Vanderbilt looked like a trap, but the end result was never really in doubt.--Red Solo Cup

Moreno was awesome, but do the Dawgs just hate the red zone, or what?--A Sea of Blue

Took a while to figure out Stephen Garcia and the USC offense, but when they did, they shut it down emphatically, which should give them some solid momentum as they head home to face the Dawgs.--Hey Jenny Slater

Squeaker at Williams-Brice doesn't do much to dispel doubts about this team.   They'll get their chance to prove themselves this week.--Save the Shield

The defense will never be at its full potential without Ricky Jean-Francois, kinda like how last year it was never itself after the chop block on Glenn Dorsey until the title game.--Year 2

Played well against LSU in the 1st half but ran into a defensive buzzsaw in the 2nd, which blunted a lot of momentum from their 4-game win streak. I'm catching another whiff of Shreveport in the air.--Hey Jenny Slater

Garcia showed signs of brilliance, particularly in the 2nd quarter, but also displayed an air of unmerited cockiness. As he matures in the offense, SC will get better. Now, about that running game...--The Dead Guy

The gamecocks are starting to look like a football team after playing LSU so close. Who knew LSU would have a 12th man on the field with them.--Mississippi State Sports Blog

Vandy is now facing teams that have enough talent to break a couple big plays and force Vandy to play catchup which is not the Commodore's strength.--Orange and Blue Hue

Ah, what a nice first half of the season story this was. But welcome to earth, 'Dores.--Pelican State Sports

The Commodores continue to occupy this spot because, and only because, they have a better record than South Carolina and they beat the Gamecocks head to head. The bloom, however, is off of the Vandy rose. The ‘Dores will get that elusive sixth win, and maybe even a seventh one somewhere, but we are at the point in the season at which the teams get tougher and the Commies' depth issues become more pronounced. It's mostly downhill from here.--Dawg Sports

People need to acknowledge that what Rich Brooks has done with UK far outshines what Bobby Johnson has done at Vandy. Brooks has built an annually competitive program in Lexington.--Orange and Blue Hue

Epic failure forestalled by the Randall Cobb Show. Mike Hartline even threw a couple of spirals in this game.--A Sea of Blue

Kentucky fans are like "we suck so bad" and Rich Brooks is like "uh uh fooz, we are this close to a bowl game!" and the fans are like "but we don't have anymore Sun Belt or WAC teams on our schedule!"--Mississippi State Sports Blog

Played Bama tough but came up a little short. Still have a good chance to make a bowl.--Garnet and Black Attack

Ole Miss proved that Bama is vulnerable in the second half -- just like Kentucky, and Georgia. Hmmm, do Vols have a chance?--Gate 21

Comeback versus 'Bama was encouraging, but still fell short. May be the SEC's most schitzophrenic team.--Save the Shield

Off this week, which has got to be a relief to Auburn fans and will probably bring up their scoring average, but I think they would still be favored against all the teams below them, I guess.--Pelican State Sports

The Plainsmen must be getting better, because I have no distinct memory of Tommy Tuberville's Tigers sucking this past weekend. Oh, wait, they didn't play, did they? Still, that's progress, of a sort...--Dawg Sports

Played very well for 3 quarters but lost it in the waning moments of the 4th. All will be forgiven by the HogNation if the Razorbacks come out victorious this weekend.--The Dead Guy

How unlucky can you be?--UK Wildcat Country

Wow, this is really starting to get embarrassing, isn't it? The Hogs certainly appear to be improving, though, which bodes well for the Razorbacks' future under the second, third, and fourth years of the Bobby Petrino regime. Yes, I chuckled a little when I typed that last part.--Dawg Sports

Try this on for size: Alabama will lose. Why not this weekend in Neyland, starting a five-game tear (at S. Car., Wyoming, at Vandy, UK) and sending out poor Phil with a shred of dignity?--Red Solo Cup

Game of the year this week for the Vols. Can Fulmer save his job by beating the 2nd-ranked Tide?--Garnet and Black Attack

Hallelujah!  The Vols finally seem to get the ship moving forward ... at least a little bit.--Gate 21

You can't expect the Bulldogs to score more than 3 points in two straight games can you?--Orange and Blue Hue

I was really hoping for another 3-2 outing from State, but then their QB had to go and start throwing touchdowns to the wrong team. They can't even suck in entertaining fashion anymore.--Hey Jenny Slater

Is there even an argument that this isn't the worst team in the S.E.C.? Well, yes, there is, as a matter of fact. It's possible that the Magnolia State Mutts aren't "bad," per se, they're just postmodern deconstructionists who reject "offense" as a social convention imposed by the patriarchy. Yeah, that's got to be it. They're left-wing academics with an aggressive agenda of social reform. In Starkville, Miss. With cowbells. Is it possible to ring a cowbell within "scare quotes"?--Dawg Sports