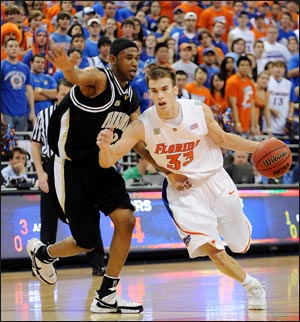 Ready for another run to the title?

The hoops season is soon upon us. Here are is my pre-season power rankings for the East. As many have recognized, the East probably features the three best teams--Florida, Tennessee, and Kentucky--so expect one of these teams to win the title come tourney time.

Although they faded down the stretch last year before making a run to the NIT finals, where they lost to UMass, the Gators have a number of skilled players and should be conference and maybe national contenders. They lost talented big man Mareese Speights to the NBA, but they return several sophomores that should gel better after a year of playing together. Among them: Jai Lucas, Chandler Parsons, and Nick Calathes. As usual, they also signed a powerful incoming freshman class, and players like Kenny Kadji and Eloy Vargas will contribute immediately. Senior hustler Walter Hodge completes a core group of players that is talented and deep.

The Vols look to be solid but probably not as good as last year's regular season SEC champion squad. They lose a number of players and will have to rely on their highly recruited class of freshmen along with upperclassmen Tyler Smith, Wayne Chism, and J. P. Prince. This should be another exciting, high-scoring team, but you have to think that the lack of experience and lingering defensive issues are going to cost them against elite competition.

The Cats won't lose to Gardner-Webb again this year, but they're likely still a year or two away from being able to challenge the Gators and Vols. Joe Crawford and Ramel Bradley are gone, so Kentucky will have to rely on Patrick Patterson quite a bit. That's not a bad situation to be in, because Patterson will likely be the best big fella in the conference. However, he won't be enough to get the Cats past the first or second round of the NCAA tourney.

The Gamecocks return almost every significant player from a team that lost a lot of close games and could have just as well finished 18-14 as 14-18. With added experience and an exciting new coach, this group should be ready to win a few more games this year, although they'll likely do no better than play spoiler in terms of the big picture. Devan Downey may be the conference's best player.

Vandy returns all-conference center A. J. Ogilvy but loses the rest of its team, including a number of sharpshooters that opened things up for Ogilvy on the post. This means that the Commodores will likely struggle a bit this year until they find a combination that works for them.

The Dawgs concluded last year with a surprise championship run in the SEC tourney, probably saving coach Dennis Felton's job. It's going to take another unlikely turn of events for the Dawgs to go anywhere this year, as they lose most of the core group of players that composed a pretty mediocre team last year.