Share All sharing options for: SEC Power Poll, Week 6: Bama and LSU and Georgia -- and Vandy?!? 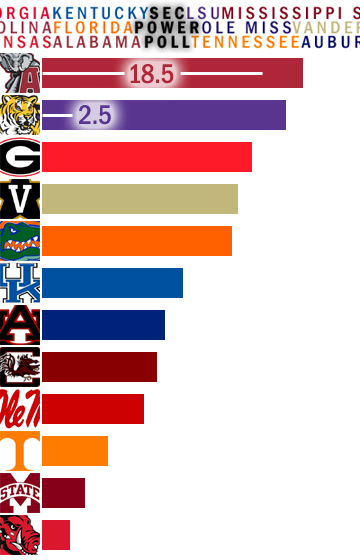 There are, it appears, four tiers emerging right now. Alabama and LSU are in a heated race for No. 1. Behind those two, should they slip, are Georgia and -- gulp -- Vanderbilt, along with Florida. The third, middle "tier" goes Kentucky, Auburn, South Carolina and Mississippi -- all teams that have shown flashes of being good this year but still have substantial question marks.

And, despite Tennessee's best efforts to underimpress, the Vols remain far ahead in the race to avoid the "Worst of the Best" Cup. Mississippi State is still 15 points ahead of Arkansas, which seems determined not to accidentally release its grasp on the trophy by, you know, playing well.

Everyone should've seen the inevitable too-close-for-comfort game against Kentucky coming, but last year's team would've found a way to lose that game. This one didn't.--Hey Jenny Slater

Hard fought win against UK but this team has neither the depth nor experience to survive the SEC with less than two losses.--Orange and Blue Hue

If I'm a Georgia fan, I'm wondering why we let John Parker Wilson carve us up like a Christmas ham just a week before those mighty UK Wildcats made him look like what JPW usually looks like.--Joe Cribbs Car Wash

Their D has been less than murderous the past couple weeks, but it's still a stretch to think that this is the team against whom Tebow and the Gators are finally going to have their big breakout game.--Hey Jenny Slater

Take a step back, and you see blowout wins over a I-AA team and North Texas, a close win over Auburn, and an unimpressive win over Miss State. This team still needs to prove itself.--Year 2

They had the week off and should have no problem in the swamp this weekend, but stranger things have happened.--Mississippi State Sports Blog

Hopefully the Bulldogs spent this past weekend getting drunk, chasing hookers, and playing in traffic. If not, then I fear that the Vols are doomed this weekend in Athens.--Gate 21

When was the last time the Dawgs had Tennessee as the breather before a big showdown with the undefeated Commodores? I'm guessing ... Never.--Joe Cribbs Car Wash

World's largest hobnail boot expected to be sighted between the hedges in Athens at this weekend's game against Tennessee.--The Dead Guy

Everyone keeps expecting them to falter, but at this point you have to begin considering them a real threat to get to Atlanta if they can pull of the unthinkable against UGA or Florida.--Garnet and Black Attack

What a great story. I love this team but even I'm not buying into the idea that they have a shot at the SEC East.--Orange and Blue Hue

The Dores are currently leading the East, and I predict they will fight down to the wire for the SEC East title. Though a bit short on depth, this team is very solid, very disciplined, and very good.--Gate 21

It was subtle, but an identity on offense finally began to form against last weekend. Will the return of LB Ryan Stamper, who was out against Arkansas, be enough to help slow down Charles Scott?--Year 2

4th quarter explosion in Fayetteville gives hope that at least one SEC team might have an offense.--Save the Shield

To the Gators' credit, they didn't try to assemble a slate made up of patsies, but, with Arkansas, Miami (Florida), and upcoming season-ender Florida State all tanking, U.F. must contend with the simple reality that all four of the Saurians' victims boast 2-3 records. The one 3-3 team the Gators faced beat the Orange and Blue in Gainesville. What happens when Urban Meyer's club starts playing teams that are above .500?--Dawg Sports

The scoreboard said three points as a difference. Those who watched realized it wasn't that close. Can the Cats still make a bowl and make a difference? Depends if they beat S. Carolina.--UK Wildcat Country

Kentucky may have played well enough against Bama to achieve the dubious distinction of Almost losing their way into the top 25.--Loser With Socks

They had the best defensive front Alabama has played so far, and should get to at least 8 wins again. Who knew they had depth?--Roll Bama Roll

This team has one of the worst offenses I've ever seen. As South Carolina, the other bad offense/good defense team, moved forward offensively, these guys got worse, gaining only 200 against Vandy.--Garnet and Black Attack

Ok, this offense is terrible. I have been trying to give it time, waiting for the explosion, but it hasn't come. It's tough to watch.--Pelican State Sports

Just punt the ball. No, I'm serious Tony. Punt it and let the defense do its job. It's the only Auburn unit functioning effectively at this point.--Georgia Sports Blog

Sightings of the late-90s Ball Coach reported in Oxford, but still unconfirmed.--Save the Shield

Oh, so that's why Tyrone Nix was ousted from SoCar. Spurrier knew his defense better than he did.--Red Solo Cup

Put away the "big, powerful team" jokes, Bulldog Nation; the Gamecocks finally registered that elusive S.E.C. win, and it was a pretty big one for the Palmetto State Poultry, who went on the road and bagged an upset in Oxford. It was a solid performance by a team that now looks like a bowl contender again, but, anytime your team considers beating Ole Miss an upset, there are unresolved issues remaining.--Dawg Sports

This team is setting itself up to be on Phil Steele's potential risers list of 2009 with all of its close losses.--Year 2

Nutt working furiously to teach holding onto the ball. If he succeeds, Ole Miss will have a decent season.--Save the Shield

Tempting to blame the defense for giving up 31 points and 400-plus yards to Chris Smelley and Co., but if the offense scores more than three points in the second half, the game's pretty different.--Joe Cribbs Car Wash

Congratulations, Vols: After a month fraught with controversy and embarrassing losses, you have proven you can hold your own in the Mid-American Conference.--Hey Jenny Slater

Personally, I am expecting to see the Vols play much better towards the end of the year. Nick Stephens isn't a Heisman candidate, but he was serviceable against NIU.--Tide Druid

13-9 against a MAC team and only 9 first downs to the Huskies' 12 doesn't exactly make that quarterback switch look like a genius coaching move.--A Sea of Blue

I really wish the Bulldogs and Hogs would just go ahead and play each other so we could have a definitive answer to who's No. 12 and spend our time worrying about more important things. Like birds.--Joe Cribbs Car Wash

The defense enjoyed their off weekend. The offense has taken every weekend off since August 30.--The Dead Guy

How bad has it gotten in Starkville? The Western Division Bulldogs are looking wistfully towards Auburn in admiration of the Tigers' offense ... and the urbane sophistication of the so-called Loveliest Village. M.S.U., the "sick man" of the S.E.C., has a fever, and, no, it can't be cured by more cowbell.--Dawg Sports

Appear to have finally found a rushing threat. Now if they can just find a game-breaking receiver, a run defense, a secondary, a quarterback, and a kicker, they'll be all set.--Hey Jenny Slater

Once they get a little defensive depth and Mallett can play, the Hogs will be damn good. Enjoy this while it lasts, western division.--Roll Bama Roll

At least the Hogs managed to hold Florida under 40 points for the game...we were expecting the Gators to hit that mark by halftime.--Razorback Expats