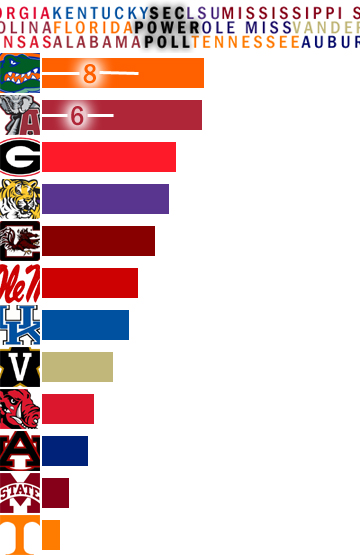 Sorry for the low turnout, but we had one slow week last year as well. Looks like this week will be it this season.

It might have made a difference. Florida, which actually split too first-place votes with Alabama, edged the Tide by two points for first. The only other change was Tennessee wresting control of the race for the "Worst of the Best" Cup with a convincing loss to Wyoming. I can assure you: When the SEC Power Poll started last year, none of us imagined Wyoming would ever alter the standings.

Voters explain more after the jump.

Faster than a greyhound on crack, meaner than an insecure pit bull.--Pelican State Sports

I'm worried about their focus. It's like they're satisfied just to win by four TDs now.--Save the Shield

Tim Tebow's teary-eyed promise following the loss to Ole Miss was not just posturing; no team in the league has played better football since the end of September than the Saurians.--Dawg Sports

They won. You're not playing for style points in Baton Rouge.--Garnet and Black Attack

Like the Roseanne Barr of the SEC. Ugly, but successful.--Pelican State Sports

Another close win over Mississippi State as the Bammeroids keep their eye on chopping off Tubby's fingers. Fear the process, aight?--Loser With Socks

I'm starting to jump off the Bama bandwagon. Their entire reputation  and #1 ranking was made in the first thirty minutes in Athens. Other than that, what have they done?  Eke out wins over mediocre or bad teams. While the Gators may not have seen a defense like Bama's, Bama has certainly not seen an offense like Tebow and crew.--Georgia Sports Blog

The Dawgs managed to pull one out against the Wildcats, but apparently forgot that they are allowed to play defense. Useful stuff that.--Gate 21

38-49-38. No, not Sir Mix-A-Lot's dream girl. They're the point totals the once vaunted UGA defense has been given up over the last 3 weeks. They should get back on track against hapless Auburn this weekend.--The Dead Guy

A gutsy performance by the Mighty Hats falls short once again due to a Jarrett Lee pick six. Apparently the "pick six" is the hottest lottery in La.--Orange and Blue Hue

Perhaps Jarrett Lee's receivers should wear the other teams' uniforms. The opposing DBs seem to be his favorite targets for TDs.--The Dead Guy

The Bayou Bengals showed heart and character in making a game of it in an emotional showdown with the Crimson Tide. It is a point in L.S.U.'s favor that the home team might have won had its quarterback thrown only three interceptions. It is a point against the Fighting Tigers that their best option under center is a guy who throws four picks at home in the biggest rivalry game of the year.--Dawg Sports

They keep charging along. All those obituaries for the OBC's career after Week 2 look a bit premature, don't they?--Save the Shield

The Cocks look like a lock for New Year's Day after another solid effort against the Hawgs. Spurrier has gotten Carolina in a position where they are winning the games they should and are competitive against the big boys. He's quietly having a splendid season.--Georgia Sports Blog

A win over ULM this weekend will earn them bowl eligibility and something to hold over Alabama's heads. It's like Christmas in November!--Hey Jenny Slater

The Rebels should punch their bowl ticket with a win over UL-Monroe. Add in a win in the Egg Bowl and whatever bowl they go to and it's an 8 win year. I think everyone in Oxford can live with that.--Year 2

The Rebels quietly are putting together a nice season in Oxford under Houston Nutt. The team has a winning record with a marquee victory (over Florida in Gainesville) and all's right with the world. That whole "beating Florida" thing? Y'all need to tell us how to do that. If you do, we'll tell you how to beat everybody else. So it's a win-win, really...--Dawg Sports

After two months of tripping over their own feet on offense but playing solid D, the Wildcats pulled a 180 and got into a shootout against UGA. Randall Cobb looks like the real deal at QB, though.--Hey Jenny Slater

What? Kentucky has another quarterback? Rich Brooks thinks that is BS.--Pelican State Sports

Kentucky just proved that a reputation for good defense is no substitute for ... you know ... ACTUAL defense.--A Sea of Blue

Up until now Vandy had been competitive in all its losses. Then again it hadn't played a team like Florida yet. Maybe they won't make a bowl after all. Try beating Duke and MSU next time.--Orange and Blue Hue

This Nickson fellow looks pretty useful. I wonder if he has any potential as starter?--Save the Shield

I can only imagine how fragile the psyche of this Vandy team is right now. They've gone from college football's best story to potentially orchestrating a choke job worthy of 2007 South Carolina.--The Dead Guy

Yet another effort killed by Casey Dick's interceptions.--Garnet and Black Attack

Arkansas is a better team now than it began the season but still has a long way to go. With Michael Smith injured against South Carolina a 6-6 season now looks all but impossible.--Orange and Blue Hue

Getting win No. 5 in Starkville this weekend should happen, but getting No. 6 against LSU is another story. Those close losses to Kentucky and Ole Miss are looming large.--Year 2

Still have yet to beat a D-IA opponent in the post-Tony Franklin era, and hopefully they'll wait until after this week to figure out how to do that.--Hey Jenny Slater

Good: offense put up 37. Bad: it was against Tennessee-Martin.--Pelican State Sports

Hey, a win is a win right? The Tigers snapped a 5-game skid. Now their bowl eligibility rests on knocking off either Georgia or Alabama. Good luck with that.--The Dead Guy

The best they can hope for is that Alabama is so hungover from the LSU win that they end up in another 3-2 situation in Tuscaloosa this weekend.--Hey Jenny Slater

Mississippi State did not play this week, which is good considering the Tide is coming to town this week. Is there any magic in the bag of tricks -- such as disappearing from the game entirely.--Gate 21

After squealing like pigs all weekend in Tuscaloosa, the Bulldogs will join Tennessee and Auburn as the only SEC teams to have losing seasons wrapped up.--The Dead Guy

If the players are going to quit on this season, then there's no reason not to put them last. And if they didn't quit on the season and still lost to Wyoming, I'm not sure that's better.--Year 2

Oh dear Lord... Wyoming is not a very good team, but then again, neither is Tennessee. Can it get worse? NO!!! Don't answer that question.--Gate 21