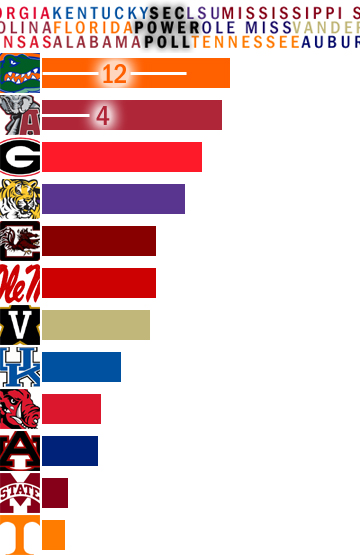 Florida extends its lead over Alabama (POINTS! POW! ZING! Oooh. Pretty!). The two once again split first place on two ballots. Meanwhile, the only real movement in the poll is Mississippi tying South Carolina and Vanderbilt passing Kentucky. And Tennessee "leads" by only three in the race for the "Worst of the Best" Cup, though that name might not fit. It's a down league this year, folks.

Voters tell us more after the jump.

Probably the most talented and lawless team in the East, the outlaw Gates have two more criminal teams looming ahead: FSU and the  Roids.--Loser With Socks

So the long-awaited matchup for the ages looms before us: Irresistable force versus immovable object. Godzilla versus Superman. Florida Gators versus Citadel Bulldogs.--Save the Shield

They're not really taking anyone behind the woodshed and just beating the crap out of them from the opening gun, but then again, that was a complaint frequently lodged against the '92 team, too.--Hey Jenny Slater

I just can't see them beating the Gators, although low-risk, efficient style of play might work well when the two teams square off.--Garnet and Black Attack

The Tide's win over Mississippi State was a great metaphor for their season.  Steady, often underwhelming production that, after it's all over, looks like a dominating performance.--Red Solo Cup

Sloppy play and ill-timed defensive breakdowns are turning what should be blowouts into close games. Georgia Tech is good enough to make them pay for this in a couple weeks.--Hey Jenny Slater

Mark Richt sure seems to be getting a lot of flak these days for a coach with an OL decimated by injury and a team that's only lost to two de facto NC semifinalists.--Save the Shield

I dunno, I'm starting to think opposing defenses are sending Jarrett Lee e-mails like DEAR MR. LEE: MY NAME IS PRINCE TEBO MUTOMBO OF THE REPUBLIC OF PIKSIXIA AND I HAVE INHERITED 47,000 FOOTBALL POINTS AFTER THE DEATH OF MY FATHER KING LORENZO MUTOMBO OF PIKSIXIA. I NEED YOU TO HELP ME KEEP MY FOOTBALL POINTS SAFE. IF YOU ARE WILLING TO PAY VIA INTERCEPTION TRANSFER A SMALL SCOREBOARD INCREASE FEE OF SEVEN FOOTBALL POINTS FOR ME, I WILL MOVE MY POINTS TO A SAFE ACCOUNT IN GAYNESVILLE AND BE ABLE TO GIVE YOU 7,000 FOOTBALL POINTS AS A TOKEN OF MY GRATITUDE. THEY WILL BE YOUR POINTS YOU CAN USE TO WIN YOUR TEAM FOOTBALL. PLEASE HELP ME MR. LEE.--Joe Cribbs Car Wash

L.S.U. is talented, well-coached, and riddled with holes that prevent the team from living up to its potential. Basically, Les Miles's team is Georgia with a Cajun accent.--Dawg Sports

From very early on against Florida, they looked desperate in a way that you don't usually see Spurrier teams look, and I'm not just talking about the dumb*ss throwback attempt on the kickoff return.--Hey Jenny Slater

You see Steve!?! That's what it felt like all those years!--Red Solo Cup

For some reason, the national media just doesn't understand how tough Ole Miss is to their SEC rivals or the Fighting Nutria of ULM.--Loser With Socks

Bowl-eligible for the first time in 26 years -- honestly, I was starting to think they didn't have it in 'em -- and they've still got a chance to pad their bowl resume against Tennessee and Wake.--Hey Jenny Slater

You're lucky I managed to fill out the other 11 teams instead of doing more daydreaming about bowl destinations.--Save the Shield

The Commodores overcame a quarter-century of unfavorable history to become bowl-eligible for the first time since I was in junior high. It will be the cruelest of ironies if Vandy receives a Music City Bowl bid for its trouble.--Dawg Sports

If Kentucky could avoid their slow starts this could be an 8 or 9 win team by now.  And all this is being done with UK talent ... wow.--Orange and Blue Hue

I keep looking for reasons to take this team more seriously than I do, but they keep giving me precious few.--Year 2

The Hogs are clinging to waning bowl hopes entering this weekend's showdown in Starkville.--The Dead Guy

We needed that bye week. And now, on to the first game in forever that we might actually be expected to win (which makes me VERY nervous).--Razorback Expats

As wacky as this may sound, the Hogs could end their season with wins over MSU and LSU. The SEC West, outside of Alabama, is just that mediocre.--Red Solo Cup

Was that a win one for the gipper, save coach his job type performances? Because if so, Tubs better pack his bags before the Bama game.--Orange and Blue Hue

Great to see Auburn finally, finally get over the top after so many weeks of trying. Trying to cover the spread, I mean. That's an eight-game losing streak we snapped there. Also, the trying to finally hit dead last in the country in red zone efficiency. We've been after that one for a while, too.--Joe Cribbs Car Wash

If the Bulldogs can't beat the Hogs or Rebels, you'll be able to make an argument this is, in fact, the worst season yet of Croom's tenure.--Joe Cribbs Car Wash

If they can't get off the mat any better than they did against Wyoming, then a 3-9 record and the title of "Worst Team in UT History" await them. Does anyone in Knoxville even care at this point?--Hey Jenny Slater

About to get stomped by Vandy and Kentucky. My how times have changed.--Garnet and Black Attack

Nick Stephens had a nightmare last night that the Volunteers are going to hire a head coach specializing in the spread offense.--Red Solo Cup