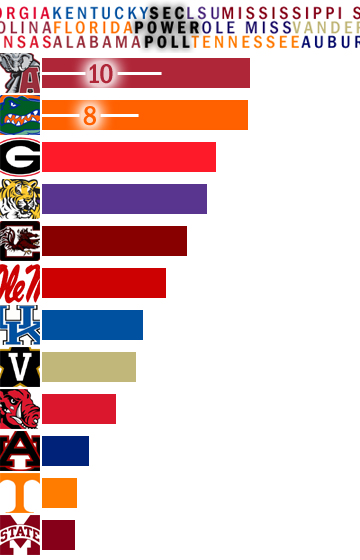 Second, this is the closest (in terms of first-place votes) anyone has come to Alabama in weeks. In fact, it's the closest anyone's gotten since the Tide assumed the No. 1 spot back in Week 5 -- reflecting a growing consensus that the SEC is Florida, Alabama and everyone else.

"Last week, this was a three team league," wrote Pelican State Sports. "This week, it's a two team league, and those two won't likely meet -- if they meet -- until the Championship Game. The middle section is filled with teams that are pretty good, but not great. And the bottom has some just plain bad teams."

Little else changes. Kentucky and Vanderbilt trade places, as do Auburn and Arkansas. And Tennessee is rallying behind Coach Phil Fulmer with a last-minute surge toward the "Worst of the Best" Cup.

For more enlightenment, read what our voters say after the jump.

The Tide keep on rolling, and in the big picture it probably doesn't even matter if they lose to LSU this weekend. Just don't tell that to all the Tiger fans who want Saban's head on a platter.--Year 2

Well, the Tide took a half to get going against Arkansas St. But they never got going against Tulane and you see how accurate a picture that was.--Joe Cribbs Car Wash

Yes, the Gators have looked more dominant, but flashy Florida units have been outperformed by merely methodical Crimson Tide clubs for a while now and looks sometimes are deceiving. No matter what the scoreboard says, ‘Bama beat the Bulldogs a good deal more handily than the Saurians did, and, besides, the Red Elephants are undefeated. Also, they beat Ole Miss at home, which is a point in their favor.--Dawg Sports

Have they played a defense yet?  Ellis Johnson has SC playing pretty well on that side of the ball, and that game is going to be big in determining if the Gators are really as scary as we think.--Roll Bama Roll

What they've done the last couple of weeks against 2 bowl-eligible teams has been nothing short of scary.--The Dead Guy

UF is playing the best football of anybody in the country right IMO. Florida will probably annihilate the Bammeroids in the SECCG.--Loser With Socks

Everyone in the SEC who's a serious national-title contender, take a step forward. Not so fast, Bulldogs. You're playing for 2009 at this point.--Hey Jenny Slater

Georgia will, on occasion, let their opponents score in bunches.  This "gameplan" is perhaps the worst possible option against Florida.--Red Solo Cup

Richt's 'Dawgs join the ever-growing 'humiliated by the Gators club.'--A Sea of Blue

Was LSU able to work on enough against Tulane to help prepare for the Tide?  It's LSU's last chance at respect.--Orange and Blue Hue

Convincing but hardly dominant performance against Tulane.  LSU resembles its fans at night games in Baton Rouge -- meandering back and forth between purpose and idleness, between sobriety and stupor.--Gate 21

Appear to be headed for eight wins and maybe even a New Year's bowl game, which I never would've predicted back in September.--Hey Jenny Slater

Stephen Garcia, when not gettin' his swerve on, seems to be what South Carolina needs.--Red Solo Cup

Ordinarily, I curse the S.E.C. schedule makers who require the ‘Dawgs to face the Gamecocks early, when the Palmetto State Poultry are healthy and hopeful, rather than late, when their comparative lack of depth usually is wearing them down. This year, though, I'm glad the Red and Black were able to dispense with South Carolina sooner rather than later, because Steve Spurrier's squad is peaking.--Dawg Sports

I think it is fair to say that the Reverend Nutt has accomplished his first goal of bringing the Rebs back to respectability. Goal two -- a winning season.--Gate 21

The ‘Cats got back to the formula they used for their early season success: Play an opponent who sucks. Still, can't argue with bowl eligibility.--The Dead Guy

The 2007 'Cats were a hundred times more dangerous. But the 2008 'Cats are the ones who are winning the games they should.--Joe Cribbs Car Wash

Rich Brooks has revived the Wildcat football program, creating a perennial bowl invitee out of a squad that had been left for dead as a mere opening act before basketball season, but injuries have hampered the Bluegrass State Felines' rise this season.--Dawg Sports

Still at one game and counting. When does the pressure start to build to the point it becomes suffocating?--Orange and Blue Hue

5 wins, 3 losses, and no gimmes left. Bowl eligibility is not going to be easy, which will be very disappointing after that 5-0 start.--Pelican State Sports

Please let this train wreck end quickly. The hoops team could be really interesting this year.--Save the Shield

Slowly improving, although we probably shouldn't make too much of the Tulsa game.--Garnet and Black Attack

It doesn't really ease the sting of losing a close one to Nutt, but shutting down Malzahn's Tulsa was a nice way to close the door on any remaining bad 2006 juju.--Razorback Expats

I owe the Hawgs an apology. After losing to Bama, I said they wouldn't win again.  They've proved me wrong twice now.--Georgia Sports Blog

So much for the Tigers holding a halftime lead in every single game this season. If they haven't given up yet, they're doing an awfully good impression of a bunch of guys who have.--Hey Jenny Slater

I know the Rebels' secondary is weak, but I can't imagine any successful gameplan that includes the phrase "43 pass attempts from Kodi Burns."--The Dead Guy

Tennessee used to be known for its quarterbacks and receivers. Now it's known for it's linebackers and losing seasons.--Orange and Blue Hue

Yanking Stephens after the first INT of his career and putting in Fumbles the Clown called to mind the worst moments of Fulmer's season-long game of QB roulette back in '05. The fat lady's warming up.--Hey Jenny Slater

SEC? You better pray for redemption and rapture. Mike Hamilton's coach search will yield the Pale Rider.--Loser With Socks

I've never been a big fan of the whole head-coach-dumps-an-assistant-to-save-his-own-job strategy, but seriously, there's no reason for Woody McCorvey to still be employed in Starkville at this point.--Hey Jenny Slater

Apparently just sucking on offense was enough for the Bulldogs. Now, they suck on special teams too.--The Dead Guy

Any commentary I had to offer here would be cruel.--Dawg Sports