Share All sharing options for: Comparing South Carolina and Iowa: The OL

Iowa's offensive line doing what it does. 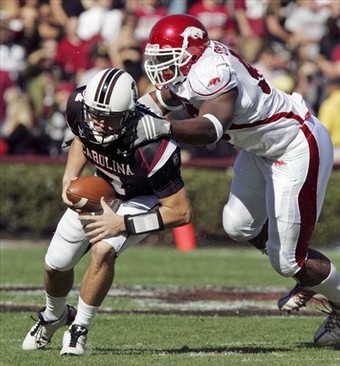 South Carolina's offensive line doing what it does.

I shouldn't be so hard on our line; I really shouldn't. They've played much better down the stretch and had little to do with our offensive woes against Clemson. However, all you need to know when comparing South Carolina and Iowa's lines is that South Carolina is one of the worst rushing and most sacked teams in the country, while Iowa sports one of the country's best rushing offenses. Line play has been a major problem for us this year (as in every year during the Spurrier era). Moreover, while firing John Hunt was the right move, it leaves us without an experienced line coach as we prepare for the bowl game. That may not hurt us too much, but it probably won't help.

That said, I am optimistic about our defensive front's ability to beat Iowa in the trenches. We won't stop Shonn Greene, but hopefully we'll be able to slow him down enough to get Iowa to third-and-long fairly often. As for our line, their job will be to slow down Iowa's front four. Iowa doesn't blitz much, so hopefully our big guys can handle the guys they're assigned to. Don't be surprised if Stephen Garcia has to rely on his feet to beat the pressure, though, as Iowa's defensive line is quite capable of getting to him without the blitz.