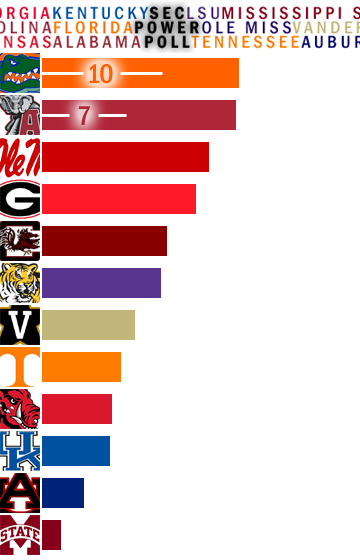 First of all, congratulations to Mississippi State, which has clinced the "Worst of the Best" Cup barring a truly awful bowl game by someone ahead of them. But some of our pollsters think that the "Best" part of that might be, eh, a bit overrated ...

So I won't be the first person to make this joke (and it's unlikely I'll be the last), but all of a sudden the notion of an SEC "Power" Poll seems a bit like a misnomer. The JCCW's nominees for the new name of the poll are as follows:

Let's be honest, now. This year, "S.E.C. Power Poll" is a bit of a misnomer. "S.E.C. Weakness Poll" would be more like it, complete with a countdown from worst to first, from "weakest" to "least weak team of the week."--Dawg Sports

Oh well. In any case, just three points separate Florida from Alabama -- thought that will likely change as soon as one of them wins Saturday. We'll have to wait until after the bowls to see. Mississippi moves to No. 3, dethroning Georgia, which ends up at No. 4 after getting defeated by Georgia Tech.

A strong finish puts Tennessee up to No. 8, and Arkansas goes to No. 9 (from last place just last week) after defeating LSU. This puts Kentucky at No. 10. Too bad Norfolk State isn't in the power poll. And Auburn officials were so outraged at the Tigers' No. 11 finish that they fired "resigned" the coach.

Maybe the poll has some power after all.

Voters, explain this. But, first, jump.

The fact that the Gators are favored by nearly double digits at a neutral site against the consensus #1 team in the country should tell you just how dangerous the rest of the country thinks they are.--Hey Jenny Slater

If (when?) Florida wins the BCS title, would the rest of the country give up its "the SEC isn't as good as everyone thinks" crusade?--Red Solo Cup

That offense looks like a hundred flying powersaw blades ripping through all who dare oppose it. Mickey Andrews, mud, rain, and the Doak combined couldn't hold them to less than 40 points.--Georgia Sports Blog

Every time a bell rings, an angel gets its wings, and, every time a prominent Gator coach or player mists up in public, the Orange and Blue cut a swath of destruction through all in their path. If word gets out of Gainesville that Urban Meyer and Tim Tebow plan to spend Friday night watching the Lifetime Network with a box of Kleenex and a Sara Lee pound cake sitting on the table between them, you'll know a truly epic thumping is coming in the Georgia Dome.--Dawg Sports

Given everything I've seen, the Tide can actually play the "no respect" card with justification. They're the only undefeated BCS conference team, yet few expect them to win Saturday.--Year 2

Does the Tide back seven get jealous of all the attention Mount Cody's been getting this season? When you're third in the country in opponent's yards-per-pass you must be doing something right.--Joe Cribbs Car Wash

This is still the top team in the SEC until Florida beats them this Saturday.--UK Wildcat Country

Up 29-0, Saban makes his punter cry tears of blood after a shank (even that description is mild compared to the verbal assault that kid took). After seeing that, I turned off my TV because I've heard that sustained exposure to that type of intensity causes bowel discomfort. I cannot wait to see Saban scheme against Urb.--Georgia Sports Blog

In my opinion The Reverend Houston Nutt is the SEC Coach of the Year -- he did more with less than anyone in the conference. I have a feeling the Rebels will be singing Hotty Toddy a lot now.--Gate 21

The Rebels have outscored their opponents 152-20 over the last 4 weeks are playing the best football in the conference behind the Gators and Tide. Should (but won't) get the Capital One bid.--The Dead Guy

We have to say it: props to Houston Nutt for the job he did with this bunch. They were clearly the SEC's 3rd best team by season's end.--Razorback Expats

I wonder if Mark Richt has dreams of the SEC without Florida?--Leftover Hot Dog

You knew the awful tackling was gonna lose a game eventually, and it did. Maybe this is team is just kind of like Auburn '04, the squad that has its dream season a year after everyone predicted.--Hey Jenny Slater

Mark Richt is the new Fulmer. Athens: Where blue chippers go to fail.--Loser With Socks

Dude, Chris Smelley must be some sort of unholy fusion of John Elway, Joe Montana, and Green Lantern in practice or something, 'cause otherwise ... why is Spurrier still running him out there?--Joe Cribbs Car Wash

Someone should have asked Chris Smelley to, I don't know, maybe stop throwing the ball to Clemson at some point. Who does he think he is? Jarret Lee?--The Dead Guy

I think some school consolidation is in order in the Palmetto State. As distasteful as it might be to both fan bases, think of the advantages of combining Clemson and South Carolina into a single school. That way, the university could field the Gamecocks from Labor Day weekend through mid-October, then field the Tigers from mid-October through Thanksgiving. The team would never go worse than 10-2!--Dawg Sports

Sorry, Miles defenders: no one in the SEC has done less with as much top-to-bottom talent this season.--Joe Cribbs Car Wash

Les showing true colors now that he is running out of Saban players. Can we say "Hot Seat 2009"?--Leftover Hot Dog

In the 1st quarter, they let Nathan Dick -- yes, Nathan -- look like Kurt Warner circa 1999; in the 4th quarter, they let Casey do the honors. Is that any way for a defending national champ to behave?--Hey Jenny Slater

How does that work, exactly? If you lose your starting quarterback, you start giving up 30+ points per game to every opponent with a pulse? I guess, if your new starting quarterback was designed in a Cal Tech laboratory to be a perpetual-motion pick-six machine, it could cause some scores to get out of hand.--Dawg Sports

I'll use big words since it's for Vandy. The offensive ineptitude once masked by an opportunistic defense is now manifesting itself on weekly basis.--The Dead Guy

Who cares what they did last week. They are going to a bowl game for the first time since Reconstruction.--A Sea of Blue

'Dores limp to the finish line with the assistance of paramedics. Unless their bowl opponent makes a lot of mistakes, expect Vandy's first bowl in forever to result in a typical Vandy outcome: a respectable loss.--Georgia Sports Blog

A quarter-century of tireless effort has allowed the Commodores to break through the glass ceiling and achieve the genuine mediocrity of which every Vandy fan has dreamt for as long as he can remember.--Dawg Sports

Like Arkansas, they'd be bowl eligible now if they could have taken care of an inferior opponent a few weeks ago.--Garnet and Black Attack

If they had just scheduled Middle Tennessee instead of UCLA out of conference, they're probably sending Fulmer out with a bowl. That, or if they had beat Wyoming. One or the other.--Year 2

Soundly defeated Kentucky and Vanderbilt in their final two games, which is about a thousand times better collectively than what anyone else in the bottom half of the SEC accomplished in those games.--Joe Cribbs Car Wash

If they had only played for Fulmer in the same fashion of the last two games, he probably wouldn't be fired. Still, I heard a Tennessee sports show suggest Kiffin win 10 games in his second year. Wow.--UK Wildcat Country

That loss to Mississippi State must be stinging right now. This team will be better next year.--Garnet and Black Attack

Arkansas fans dislike Houston Nutt because he "loses games he should win and wins games he should lose." A good example of this is losing to MS State one week then beating LSU the next.--Red Solo Cup

Aside from Ole Miss, no team improved more offensively from the beginning of the season to the end. The defense is another story.--The Dead Guy

The win over L.S.U. was huge. Good for the Razorback players for sending Bobby Petrino out a winner in his last game before bolting for whichever job he's taking later this month.--Dawg Sports

The losing streak to the Vols lives on. It'll probably never end now.--Garnet and Black Attack

Kind of fell apart under the weight of some critical late-season injuries, but Rich Brooks still managed to put together a way more respectable season than anyone predicted.--Hey Jenny Slater

What can I say? No offense and the defense fell apart. This team doesn't deserve a bowl, even the Liberty. And I write a UK blog.--UK Wildcat Country

Pure suckage against Tennessee. This team is one huge injury, and the Vols banged us up some more for good measure.--A Sea of Blue

When your punter has the best day on the team and that day includes a 21-yard shank that helps set up the opponent's opening touchdown drive, it's been a truly terrible, terrible day.--Joe Cribbs Car Wash

The Tide made it look easy in the Iron Bowl. The reason for this is because it was easy. Just like the Vols, I am pretty sure the Tigers never anticipated a 5-7 record.  So what happens next year?--Gate 21

What a difference a year makes for Tubby.--Razorback Expats

The loss to Ole Miss showed how much progress was made in Oxford during Orgeron's losing years and how little was made during Croom's losing years.--Year 2

If ever there was a cause for a Crooming, it's losing 45-0 in the Egg Bowl. But if Croom did it to himself, is it still a Crooming? Can there be such a thing as getting auto-Croomed?--Hey Jenny Slater

Croom is gone. Now another coach can have his name turned into a verb at MSU.--A Sea of Blue