Iowa's Defense: What to Expect

Share All sharing options for: Iowa's Defense: What to Expect

The most important thing you need to know about Iowa's defense is that they don't have speed. These guys are from places like Illinois, South Dakota, and, yes, Iowa. Because they spend all their time as children in doors and out of the snow over the winter, it's difficult for them to get the exercise they need to develop legitimate athleticism as they grow up. Compared to our guys, who have the entire year to work out and develop their abilities, these Hawkeyes are going to look like they're moving in slow motion while we run past them into the endzone. 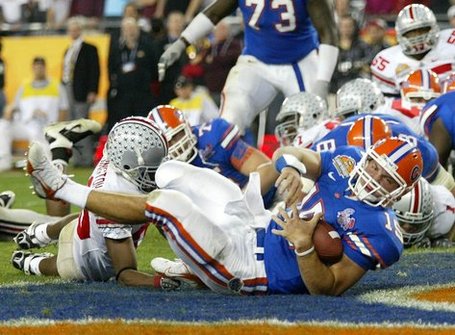 Seriously, this time: these guys have a pretty good defense, certainly good enough to stop our offense unless Stephen Garcia suddenly wakes up with quadruple the QB smarts that he's displayed so far this year. They haven't given up more than 27 points this year and pitched a shutout in their last game to a decent Minnesota team. Let's take a look at them by position.

The Hawkeyes start Adrian Clayborn and Christian Ballard on the ends and Matt Kroul and Mitch King in the middle. This group has done well against the run this year, having held several teams to under 100 total yards rushing, including Michigan State and Javon Ringer. That's pretty good, considering that most Big 10 teams run the ball quite a bit and feature solid offensive lines. These guys haven't combined for a lot of sacks (nor have the linebackers), although that could be because lots of their opponents like to run the ball and/or have mobile, scrambling QBs.

From what I can gather, the Hawkeyes typically play three in the middle. Pat Angerer is the group's run stopper, leading the team with 101 tackles. Again, this group appears to be better against the run than the pass; they've been gashed a couple of times through the air by the likes of Northwestern and Illinois. They did, however, hold Penn State's Daryll Clark to less than 100 yards through the air, although bad weather may have had something to do with that.

Not sure it's worth spending time on this. Everyone knows Big 10 defensive backs are slow. Illinois, which has a former SEC coach that knows how to recruit speed, will show you everything you need to know about the Iowa secondary at around the 1:20 mark of the following film.

All jokes aside, this is a talented, well-coached defense will come ready to play smart, tough football. I expect they won't have much trouble taking the run away from us unless we can get Eric Baker going on the edges. However, I do like our chances of gaining yardage against this team in the air. The fact that our lack of a running game will allow the Iowa linebackers to sit back in coverage worries me a bit, but Weslye Saunders and Jared Cook will give Iowa match-up problems that we should be able to exploit. Expect us to try to get the ball to these two on crossing and post patterns. I also expect that we'll try to get the ball to the receivers on screens and slant patterns to keep the Iowa defense honest if we indeed can't get the run going.

Countdown until Iowa fans hijack the comments thread with incoherent sarcasm about the SEC and innaccurrate statements about how we lost two straight Outback Bowls to Ohio State: 3... 2... 1...