1. Not good, not as bad as it looked. Watching college football on a laptop monitor with a more "important" game (Alabama at Georgia) on a big-screen TV in the background can do funny things to your perception of a game. (It can also make you thankful for the technology that allows one to watch UAB vs. South Carolina at an Alabama-Georgia viewing party.) My initial thought about the game -- that it was a thoroughly mediocre effort -- was true to an extent. Even an offense as catatonic as the Gamecocks' should be able to pick up more than 353 yards against UAB's defense.

On the other hand, the South Carolina defense largely stifled an offense that might be as good as the one that took the field whenever the Gamecocks defense was done. UAB picked up just 207 yards and QB Joe Webb was largely contained (140 yards passing, 22 yards rushing). The only touchdown came as the final seconds ticked away.

The margin was close in part because the Gamecocks decided to run the ball. And run the ball. And run the ball. In fact, the play calling was heavily tilted to ground game: 45 rushes, 33 pass attempts. Part of this was the presence of Stephen Garcia, who rushed 18 times. South Carolina ended the game with a nearly 10-minute edge in time of possession and were far better on third down than UAB. Again, that's not a great measuring stick, but it's something.

2. Stephen Garcia did well. I know I'm parting with Gamecock Man here, but I thought THE SAVIOR OF THE PROGRAM performed pretty well both on the ground and through the air. He was unquestionably better than Chris Smelley or Tommy Beecher -- again, "compared to ... " -- and the throws I saw tended to be far more accurate than what we've grown accustomed to seeing from the signal-callers up until now.

His rushing average was better than any other Gamecock save Bobby Wallace, who might have made a case for more starting time by running six times for 51 yards. And, among the three quarterbacks, he won the passer rating battle with a 126.52, compared to 52.18 for Smelley and 92.00 for Beecher, despite facing the Blazers when whatever defense they have was likely at its strongest. 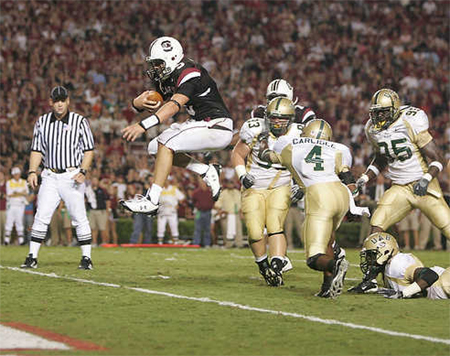 Give him time to learn the offense and get adjusted to the SEC, and Garcia could be a pretty good quarterback, though it remains to be seen if he can become everything his supporters expect him to be. Does he give us the best chance to win against Ole Miss? Probably; neither Smelley nor Beecher have shown us nothing that would lead me to believe they do.

3. Missing McKinley. There is something to be said for spreading the ball around, and the Gamecocks certainly did that in the passing game. Nine players caught the 18 completed passes, and no one had more than three.

But there are downside to that approach, too. There was no "go-to" receiver, and it's hard for the quarterback to get into a rhythm when there's not one person he can depend on. Notable: Jason Barnes with 3 catches, 46 yards.

Perhaps the biggest place where the team is missing Kenny McKinley is in the lack of a vertical game. The longest pass Saturday was a 23-yarder. It was one of two passes that went for more than 20 yards. This team needs McKinley back -- and quickly -- unless this is a lost season and he wants to redshirt and come back next year. (Unlikely, I know.)

And, after writing that, I look at GoGamecocks and see that I'm not the only one thinking that way.

Spurrier said he might approach All-SEC receiver Kenny McKinley about the possibility of a medical redshirt if McKinley’s right hamstring continues to bother him. McKinley, a senior who is in range of all of USC’s major receiving records, has missed the past three games and is doubtful for Ole Miss, according to Spurrier.

This would actually be in everyone's interest: McKinley's value will go down in the draft the longer he can't play -- no one wants to put a lot of guaranteed money into someone who's been hurt for much of the season prior to the draft. And, of course, it would give the Gamecocks one more season of McKinley, improving the depth of next year's team tremendously.

4. Succop's night. If there was one Gamecock who answered the call Saturday night, it was Ryan Succop. He hit a career-high four FGs and had 14 total points. Had it not been for Succop, the Gamecocks' margin could have been as low as 14-13, truly pathetic, instead of the uninspiring two-score edge.

Don't forget Spencer Lanning. He had a pretty good night as well, averaging 44.0 yards on his two punts. As for other special teams performers: Chris Culliver did an average to above-average job on kick returns, taking four back for 24.5 yards per, and Captain Munnerlyn was nothing special with punt returns, averaging 13.3 yards.

5. Finishing. Yes, this is to an extent an ESPN, coach-speak phrase, but it contains a kernel of truth. And it also points to a problem that could become something worse as the season advances. The Gamecocks seem to have trouble completing drives and putting away opponents.

It's not that UAB was ever truly close after South Carolina took a 10-3 lead with 44 seconds left in the fourth quarter; they weren't. But after being up by 14 at the half, South Carolina slowed down and scored just six more points in the second half and finished the game with a margin of 13.

That was in part because of two drives that ended up inside the Blazers 10 -- and ended up with field goals. Two more second-half possessions that found their way into UAB territory ended in interceptions. That's fine against UAB, but it will get you killed in the SEC.

Not that anyone's looking for a trip to Atlanta this year -- at least, I hope not -- but the only remaining nonconference game this year is the showdown with the Team from the Upstate. A successful year, however one defines it (unless you consider a four-win season a success) will involve beating some SEC teams. If the Gamecocks can't finish, the season is finished.

GRADE: C
The Garcia experiment starts on the right foot, and the Gamecocks avoid disaster. The defense remains stout; even if the Blazers defense is horrid, the offense is competent, and UAB was largely unable to move the ball. But the South Carolina offense has to, has to, has to do better soon. Otherwise, even dreaming of Shreveport might be optimistic.