The South Carolina women's soccer team won the SEC tournament title this afternoon in dramatic fashion. After a week in which they avenged two of their three regular season losses (Georgia and Florida), the Gamecocks prepared to face off against the third - LSU. LSU domintated the first half but didn't manage to score until early in the second half off a penalty kick. After that it was all Carolina. Even though they dominated the play in the second half, USC was unable to score until the 88th minute when senior and all-around stud-ette Blakely Mattern tipped in a through-pass to score the equalizer. 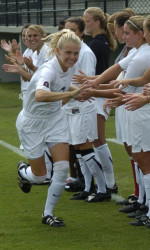 Blakely Mattern declares "Futbol" is the new "Football." via grfx.cstv.com

Two scoreless sessions of over time followed, requiring penalty kicks to decide the match. The first round of PKs resulted in yet another tie at 4 a piece. After that the teams went to sudden death in which the first team to make a PK while the other misses wins the game. South Carolina made four consecutive kicks, claiming victory on the 9th overall kick after junior goalkeeper Mollie Patton made a diving save to her right to end the game. This is South Carolina's first SEC championship in women's soccer. Congratulations on a gritty victory to USC's women's soccer program!