As many have heard, Coach Spurrier is relatively sanguine about this team's talent level and potential. Coach recognizes, however, that we've failed to meet expectations before. How can we avoid the same six-seven win result this year? For me, achievement in 2009 starts with finding answers to five questions over the course of Spring Practice.

1. Will the Offensive Line Improve?

The offense begins in the trenches, so, for a team that had no offense last year, this is where improvement needs to begin. Our line play can't get much worse, so the easy answer is that yes, it will improve. However, the line needs to show drastic improvement if we're going to have anything resembling a functional offense. I'd say we're halfway there already, as, based on recent recruiting, the talent appears to be in place. Maybe not Florida-level talent, mind you, but certainly decent.

However, having talent hasn't stopped our line from playing poorly before, though, so we're now forced to wonder: what can we do to get better? First of all, we have to hope that Eric Wolford gets these guys in line. The biggest issue for these guys seems to be toughness; they really have no excuse for getting beaten off the line by Vandy and other teams. Another thing to keep in mind: Coach Spurrier told potential 2010 recruit QB Connor Shaw that we may move to some zone read schemes, so Wolford will have the added challenge of teaching the guys new blocking schemes.

2. Who Will Be the Backup Quarterback?

Unless Stephen Garcia manages to get himself kicked off the team (not out of the realm of possibilities, but the guy seems to have learned his lessons), it's hard to imagine anyone winning his starting spot. Still, the quick-triggered Spurrier needs a good backup in case he decides Garcia isn't getting it done, so finding another capable signal caller is imperative.

The candidates? While Zac Brindise has the most experience, Reid McCollum and Aramis Hilary appear to be the front runners based on superior talent; incoming freshman Stephon Gilmore may also get a look, but I expect he'll be needed on defense. McCollum is more of a pocket passer, the prototypical guy in a Spurrier offense. Reports are that, out of Hilary and McCollum, McCollum possesses a bigger arm and better accuracy. However, with Spurrier claiming that he's considering a zone read offense with more designed runs to catch up with the times as well as adapt his offense to Garcia's multifaceted talents, Hilary's speed may make him a more viable choice. At any rate, this is a race to watch over the Spring.

3. Who Are Our Primary Running Backs?

Coach Spurrier has promised a better running game this season, and with running-game magician Wolford now working with our linemen and backs, we have reason to hope it might actually happen. However, with Mike Davis and Bobby Wallace gone and neither Baker or Brian Maddox a clear-cut favorite to replace Davis as the feature back, we have a lot of questions at the running back position.

Both Baker and Maddox have shown flashes of potential when they've gotten protection from our line, but speedster Kenny Miles and freshmen Ben Axon and Jarvis Giles will challenge for playing time. (Unfortunately, the highly-touted Giles has an injury and won't see much time this spring.) I like Miles's chances to get on the field in the fall. Miles is probably the fastest of the group, and although he's probably not an every-down back, he could provide the big play threat in the backfield that we've lacked for so long.

4. Can We Effectively Retool the Secondary?

Whatever your feelings about the duo may be, losing Captain Munnerlyn and especially Emanuel Cook leaves big shoes to fill in the secondary. Our pass protection has been a strength over the past two years, no small thanks to these two. We also lose secondary coach Ron Cooper, someone that has gotten results despite being a supposedly bad influence in the locker room.

These losses don't mean that we don't have the players and coaches we need to bring back the magic right away, though. Darian Stewart and Chris Culliver return as guys with major, successful experience this past year. Others, such as Akeem Auguste, have also proven that they have potential. While this trio doesn't fill up all five positions, we also have high-profile recruits like DeVonte Holloman and Stephon Gilmore on their way in. Top that off with new coach Lorenzo Ward, and this should remain a successful unit. The question remains, though: with so much change, can they be as successful as in years past?

5. Can Someone Replace Ryan Succop?

As the following Allstate commercial reminds us, you oftentimes forget about the kicker until you need him.

While some might principally remember Succop's well-documented struggles in the middle of last season, the fact remains that the guy was usually a top-notch kicker. It was easy to take him for granted while he was here, but now we can't anymore. Moreover, you really realize you need a kicker when, unlike in the Allstate commercial, you've got a guy like Jad Dean that costs you games that you should have or at least had a very good chance to win.

In line to replace Succop stand Adam Yates or Spencer Lanning. Lanning, as you'll remember, handled punting duties this past season, and will do so again this year. Yates appears to have the head up to win the starting job at placekicker. Can he, or Lanning if need be, ably replace Succop, though? Time will tell, but I certainly hope so.

To wrap up, wanna know one position that's not a question mark 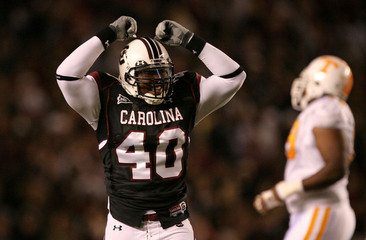 This guy's going to hurt people this year. No question about that!