Share All sharing options for: South Carolina at Georgia: A Quick Recap 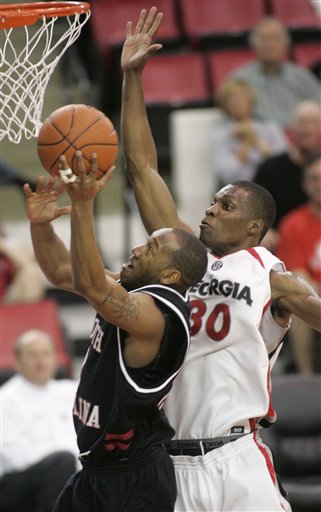 The Gamecocks netted that all-important 10th conference win today by beating UGA 68-51. Devan Downey led the way with 23 point; Zam Fredrick, Mike Holmes, and Evaldas Baniulis also made important contributions. Howard Thompkins and Chris Barnes both had 10 for UGA. The Dawgs had an awful offensive (or awfully offensive?) outing, shooting 18-66 from the field.

The keys to this win were great three-point shooting in the second half and good perimeter defense. Our offense was about as slow as UGA's in the first half, but in the second, we found some open shots and made the Dawgs pay. Doing that on the road in a game when our backs were against the wall is a credit to this team's fortitude and desire to get into the Dance. Defensively, I thought we played UGA's strengths well by selling out by selling out to make sure the Dawgs didn't get too many open threes balls. The Dawgs live and die (usually the latter this year) from downtown, and we let them heave them up but made sure we got a hand in their faces. The sometimes dangerous Terrance Woodbury was 4-21 with only nine points. Magic shots weren't falling for UGA, and they had no alternative or at least were unwilling to try to do anything else. Of couse, it's easy to say your defense did great when you play a team that was as cold as UGA was tonight, but I'd like to think Coach Horn's gameplan and our consequent perimeter pressure had a bit to do with that.

This win more or less puts us in a good position for the NCAA tournament. A win in the SECT quarters would be nice in that it would make us a lock, but a loss probably won't kill us unless other bubble teams make serious strides tonight and during their conference tourneys. (For those watching in the SEC, the 'Cats lost to the Gators today and Auburn is currently making its statement by leading LSU at the half. I like Aubie's chances a lot right now; that team has really come together.) Of course, to make sure we get in, it would be great to see us get that quarters win and perhaps more. When this team is playing well, there's no reason to believe they can't hang with any team in the conference outside of UT, who I believe presents major matchup problems for us. We'd have to have a magic shooting day to beat the Vols, but other teams are fair game on any night. It's time for this team to get a week of rest and make a run at an SECT Title!