Those of you who are in the market for collectibles commemorating South Carolina's back-to-back national championships might find this of interest: Nikco Sports has produced a Rawlings baseball honoring the Gamecocks' championship. Each ball is a limited edition of 2,011, comes with a certificate of authenticity, and comes displayed in an acrylic case. Here's what the ball looks like: 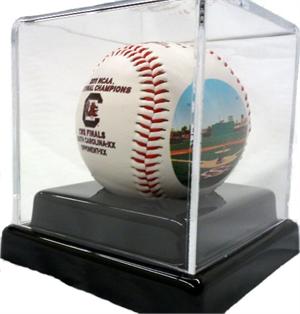 Pretty cool, huh? What's even better is that Nikco Sports is working with Make-a-Wish South Carolina to bring part of the proceeds from the sale of these balls--each of which are priced at $39.95--to children with life-threatening conditions. As many of you are probably aware, Make-a-Wish SC seeks to grant the wishes of these children in order to bring a little happiness to otherwise unfortunate situations. It has a long history of successfully enriching the lives of the children it works with.

Read more after the jump.

If you're interested in learning more about or purchasing this collectible, please visit Nikco Sports's website or call them at  1-800-345-2868 for more information. Please also check out the following press release from Nikco Sports:

Columbia, SC – As many coaches will tell you, winning a championship for the first time is a great thing.  Winning it again, in back-to-back seasons, is really the true test for a champion.  So many things can go wrong the second time around.  The expectations are higher and the team becomes a target for all opponents.

But for South Carolina baseball fans, winning their first, and now second, College World Series baseball titles in consecutive seasons is something to really savor, after the Gamecocks defeated SEC rival Florida in the tournament finals in Omaha, NE this week, winning it in two straight games, including a 5-2 victory in the clinching game on June 28.  What’s more, it is just the third national sport title ever won by the school, the other being a women’s track and field title.  The baseball program has done what the football and basketball programs at South Carolina long to do.

Interesting, the Gamecocks won the final CWS event played at historic Rosenblatt Stadium a year ago, and this time around became the first school to win a title at the new College World Series facility in Omaha, TD Ameritrade Park.

Now Gamecock fans can celebrate and remember the magic of the latest CWS success with an official limited edition Gamecocks College World Series baseball that comes inside an acrylic display case.  The Rawlings baseball features the official College World Series logo on one panel, a team history section on another panel, an image of the Gamecocks home baseball field, Carolina Stadium, on another panel and a Season to Remember section that details the winning scores against the Florida Gators in the championship series.

It’s limited to just 2,011 baseballs, and is being made available through Nikco Sports, a leader in national sports memorabilia and a company that has raised more than $1.7 million for children’s charities and others in the past five years.  Last year’s title baseballs were a huge hit with Gamecocks fans and sold quickly. The 2011 CWS baseballs are priced at $39.95 each and are limited to five per customer, as a portion of the proceeds will benefit the Make-A-Wish Foundation® of South Carolina, which helps out youngsters who have life-threatening medical conditions.

To order, fans can call 1-800-345-2868 or visit the website at www.nikcosports.com.  Each baseball comes with a numbered certificate of authenticity to enhance the value of this collectible.

"What a remarkable World Series tournament this team played, winning so many tight ballgames with excellent pitching and defense.  A lot of folks did not see the Gamecocks being able to repeat as national champions, because that is such a difficult thing to do in sports, but this team proved it was up to that test," said Nikco Sports CEO and president Craig Bidner, whose company has raised funds for charities dating back to the company’s inception in 1991.  "What has to make it even more satisfying for South Carolina fans is defeating fellow SEC opponent Florida in the finals.

"We’re very pleased to play a small part in this celebration of back-to-back baseball championships with a truly historic piece of sports memorabilia for South Carolina baseball fans to enjoy, and at the same time we are honored to be able to raise funds once again for the Make-A-Wish Foundation® of South Carolina.  We have worked with the Make-A-Wish Foundation over the years and have thoroughly enjoyed our association with them."

About the Make-A-Wish Foundation

The Make-A-Wish Foundation® grants the wishes of children with life-threatening medical conditions to enrich the human experience with hope, strength and joy. Born in 1980 when a group of caring individuals helped a young boy fulfill his dream of becoming a police officer, the Foundation is now the largest wish-granting charity in the world, with 67 chapters in the U.S. and its territories. With the help of generous donors and nearly 25,000 volunteers, the Make-A-Wish Foundation grants more than 12,600 wishes a year and has granted more than 168,000 wishes in the U.S. since inception.