Share All sharing options for: What's Cooking at GABA?: The Rochester Garbage Plate

In this edition of "What's Cooking at GABA?", I bring to you one of the glories of the frozen white north: The Garbage Plate. As its name implies, the garbage plate is basically a bunch of delicious-but-fattening food thrown together on a single plate. This dainty dish hails from Rochester, NY, where I lived for a few years while in graduate school. The dish was created at a diner called Nick Tahou's Hots ("hots" is a local term for hot dogs), which owns the trademark on the name. However, nearly every greasy spoon-type place in Rochester serves the garbage plate. Only thing is that they can't call them "garbage plates," so they call them thing like "Mark's Messy Plate." There's even an upscale joint that offers a "plate de refuse" that uses top-shelf ingredients. The dish is colloquially simply referred to as a "plate," as in, "we partied really hard last night and nursed our hangovers with plates this morning."

You order a garbage plate to your specifications. Basically, you're given a list of possible ingredients, some starches (french fries, "home fries" [northern term for chunk hash browns], baked beans, macaroni salad, etc.) and some meats (hot dogs, hamburger patties, Italian sausage links, etc.) The dish is topped off with "hot sauce," which is a chili-like gravy. Some places include diced raw onions on top of the sauce, and some include a roll on the side that you can dip in the sauce. The sauce is the defining ingredient. Restaurants pride themselves on their special sauce recipes.

Unfortunately, we here in the South don't have access to easy access to any of Rochester's famous plate-serving joints. Luckily, it's pretty easy to make one yourself, and I did just that prior to the LSU game. (Maybe bad luck to eat this prior to a game? Oh, well. It tasted good.) Like I said, the hot sauce is the chief ingredient. Here's the recipe I used. You can alter this recipe to taste. I put a little extra cayenne in, and it turned out great. I also left the grease in. Why not? As you'll see, the allspice, cinnamon, and cloves are the dominant flavor in the sauce. Here's what it looked like on the stove: 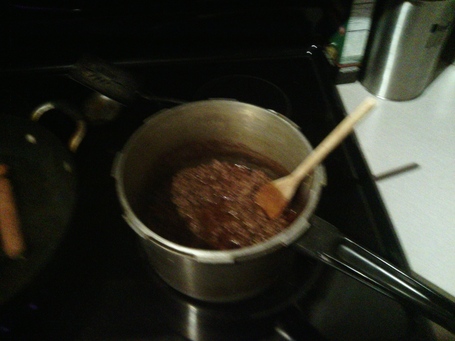 Past the sauce, it's up to you how to go about this. Like I said, you want some combination of diner-style starches and diner-style meats. We went with hot dogs (Johnsonville Smoked Brats, to be precise), french fries, and macaroni salad. (BTW, in Rochester, they use Zweigle's Hot Dogs, which are delicious. Zweigles offers both "white hots" and "red hots.") Here's how ours turned out: 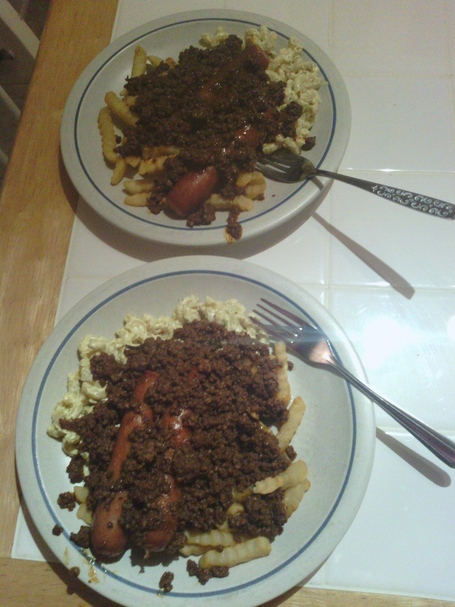