That Pesky Outlier: Evaluating the Gamecocks' Defense on Passing Downs

Jordan Matthews' 78 yard touchdown catch and run in the season opener continues to be a thorn in the side of the Gamecocks' defensive statistics.

Share All sharing options for: That Pesky Outlier: Evaluating the Gamecocks' Defense on Passing Downs

Bill Connelly posted his weekly S&P+ rankings earlier this week. The Gamecocks came in at 14th overall in defensive S&P+, weighed down by a ranking of 77th on passing downs. (Passing downs = 2nd & 7+ and 3rd or 4th & 5+ yards to gain.) That ranking didn't quite mesh with what I recalled seeing out of Lorenzo Ward's unit through the first five games of 2012, so I went back and looked at each of our games against SEC teams to see just how we fared on passing downs. [I know omitting the UAB and ECU games is potentially problematic, but 1) There was a lot of garbage time in those two games and 2) I just have no idea how good or bad those teams are in a really nutty Conference USA this year, so I thought it best to leave them out. Plus, I just didn't wanna.]

As my understanding of S&P+ goes, a team's Passing Down S&P+ can be penalized for allowing opponents to convert these passing downs into first downs (or, in the case of second downs, getting half of the needed yardage for a first), for giving up explosive plays on passing downs, or both. 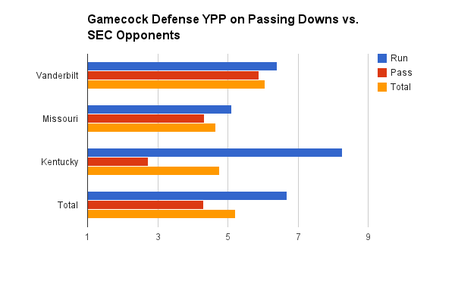 A couple of things stand out here:

1) South Carolina was terrible at defending the run on passing downs in Lexington last Saturday. Kentucky's 8.27 yards per rush on passing downs was absolutely devastating, especially in the first half. The Wildcats had four running plays of ten or more yards on passing downs against the Gamecocks on Saturday, the longest of which was a 24 yard run by Raymond Sanders.

2) The secondary's worst performance on passing downs was the season opener in Nashville. The first thought that popped into my mind was, "Hey, I bet that bizzarre 78 yard Jordan Matthews touchdown catch was on a passing down." Sure enough. It was 2nd and 12.

Excluding this outlier from the data is problematic because it is part of this team's defensive history this season. It was a horrible misjudgment on Brison Williams' part, but I honestly don't think it's a play he would botch that badly nine out of ten times. Leaving it in is problematic as well, because it makes it seem as though the pass defense on 2nd & 3rd and long was shaky all throughout the Vandy game when, in reality, it was quite dominant outside of that one, awful play (7/14 for 34 yards with 4 sacks and an interception).
Here's what the defensive effort against the Commodores looks like if Jordan Rodgers' pass to Jordan Matthews is completed but Williams doesn't go catatonic and makes the tackle, resulting in a 25 yard gain for the Vanderbilt: 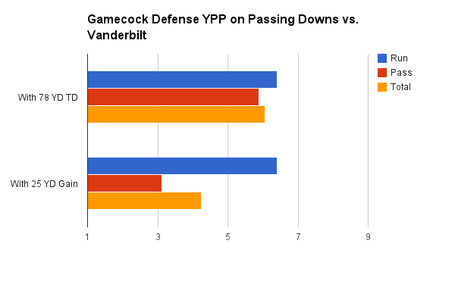 And here's how making that adjustment alters the Gamecocks' YPP on passing downs versus SEC opponents: 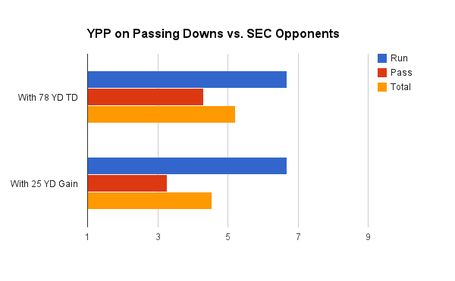 Mitigating the impact of the Matthews' touchdown creates a reduction from 5.21 yards per play on passing downs to 4.54 and a reduction of more than one yard per pass attempt. Compared against overall ypp rankings for the season, that would be the difference between being ranked 18th and 49th. In SEC play, the Gamecocks have come about two thirds of their sacks (10 of 15) and interceptions (2 of 3) on passing downs. While the yards per rush on passing downs is somewhat alarmingly high, it's entirely possible that (with the exception of the Kentucky game, where the front seven was just getting outplayed for 30 minutes) the defense is conceding those yards on second and third and long because a running play isn't likely to result in a successful conversion.

Maybe this has all just been an exercise in attempting to make myself feel better about what the Gamecocks will be facing when Aaron Murray and the Georgia Bulldogs come to town this weekend. Or maybe this means that the defense is better than a context-free view of the statistics makes it seem.