Lattimore, Johnson, Cunningham. Those are the only three offensive starters that won't be back next year.

Before the season started, I projected the Gamecocks' 2013 depth chart. One of the fun things about participating in those kinds of silly exercises is looking back and seeing just how wrong you were.

I anticipate getting some heat for looking ahead to 2013 when there are still games left to play in 2012, but here's the thing: I don't play on the football team. My decision to look ahead to 2013 has no bearing on the outcome of the 2012 season.

Here's my revised projection for the 2013 two deep: 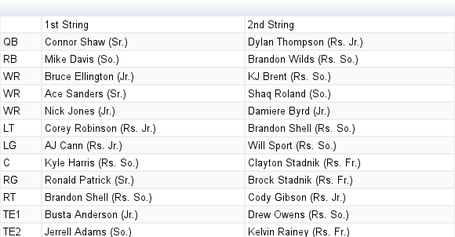 There hasn't been a whole lot of movement here. Connor Shaw has had a solid junior campaign and should be the unquestioned starter entering 2013. When Shaw injured his shoulder earlier this season, Dylan Thompson dispatched a pair of the Gamecocks' lesser opponents with aplomb, but Angel Boi Swagg is still not someone that you'd want to have to rely upon during the meat of an SEC schedule. That said, Thompson is much more of a known quality as South Carolina's backup quarterback entering 2013 than he was entering 2012, which should, if nothing else, give South Carolina fans some peace of mind.

After Thompson, it's a battle between heirs apparent to the role of QB1 in Columbia, as a pair of freshman (one redshirt, one true) will vie for the third spot on the depth chart. 2012 signee Brendan Nosovitch and 2013 commit Connor Mitch each promise a great deal of upside but are unlikely to surpass Thompson in the backup role. Current redshirt junior Andrew Clifford is expected to participate in Senior Day activities during the Wofford game and depart the football program prior to the 2013 season.

Marcus Lattimore won't be in the mix for 2013, but not for the reasons I thought back in August. With Kenny Miles' departure, Mike Davis will ascend to the top of the running back depth chart, splitting carries with backup Brandon Wilds. At the beginning of the season, I didn't foresee Wilds redshirting - and he still may not - but you'd have to think that Davis has surpassed him at this point, if for no other reason than that it will have been almost two years since Wilds has seen game action by the time the 2013 season kicks off.

There hasn't been a whole lot of movement in this group. Bruce Ellington has exceeded expectations while KJ Brent, Shaq Roland, and Damiere Byrd have each fallen a bit short, but those developments haven't done a whole lot to affect how the 2013 depth chart should look. I projected Shaq Roland as a 2013 starter back in August. While he still has a shot at that, it seems more likely that some combination of Ace Sanders, Bruce Ellington, and Nick Jones OR Damiere Byrd will be the starting trio at wideout next year. Redshirt sophomore Shamier Jeffery and redshirt freshman Kwinton Smith will also have a shot to crack the six man rotation but appear to have their work cut out for them as things stand today.

Nothing has really changed here. Jerrell Adams hasn't been quite as involved in the passing game as we thought he might be before the season started, but he's shown flashes of breaking out and should be ready to make a big contribution in 2013. Busta Anderson hasn't given us any reason to think that he won't be the primary threat, among the tight ends, to make an impact in the passing game.

The biggest stories here have been the emergence of Corey Robinson as a solid option at left tackle and the inability of Mike Matulis to stay healthy. Outside of that, my projections for the starting five along the offensive line remain intact.

I don't really see any logical candidates for this award, given annually to draft-eligible juniors and redshirt sophomores who leave school early despite having little realistic hope of sticking on an NFL roster. Ace Sanders was a name that was proposed to me by @duke_william, but Ace doesn't have the ideal frame for an NFL wide receiver and hasn't had the kind of statistical season that might entice him into having unrealistic expectations about what his draft stock might be. There are a few guys I'm worried about on the defensive side of the ball, but we'll get to that in the next post.

The Gamecocks will be returning 8 of 11 starters (or 9 of 11, if Mike Davis overtakes Kenny Miles and you don't count Lattimore), so it should be no surprise that the offense's two-deep should be rather stable heading into 2013. I thought going into 2012 that South Carolina would have one of the best offenses in the the SEC. That hasn't quite worked out, but there won't be any direction to point the finger but at the coaches if this team can't move the ball next year.