The Gamecocks enter the Garnet & Black game on April 14th with perhaps as clear of a starting quarterback picture as Steve Spurrier has ever had at South Carolina. So maybe you think you've heard that before, BUT NO REALLY WE MEAN IT THIS TIME. Barring some sort of Freaky Friday scenario resulting in Stephen Garcia inhabiting Connor Shaw's body unbeknownst to the Ol' Ball Coach, there's no reason at all to think that Dylan Thompson, Andrew Clifford, Seth Strickland, or Tanner McEvoy will challenge him for the QB1 spot on the depth chart.

That doesn't mean that the incumbent Shaw is without areas in which he needs to improve. Though he got more efficient and explosive as a passer with each successive start following Garcia's dismissal in 2011 (see graphs below), Connor still needs to get better at knowing when to get rid of the ball, when to stand tall in the pocket, when to take off, and when just sliding over would be sufficient to avoid pressure and make a throw. This was still an issue for Shaw as of last Saturday's scrimmage, in which - by Steve Spurrier's count - he took four sacks* in just 9 attempted passing plays. Shaw told the media that he's been watching film of Drew Brees to learn how to improve his pocket presence. Spurrier is a big believer in using spring practice to get the younger players ready, so it will be interesting to see how many snaps Shaw takes in the spring game before giving way to the backups. 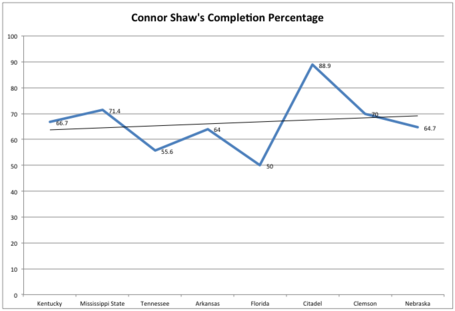 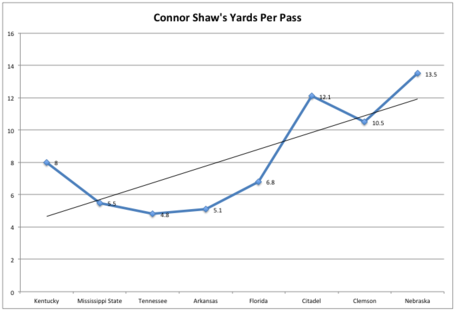 Once you get past Shaw is where it gets... uh.... interesting. None of the backups on scholarship have impressed Coach Spurrier this spring. He told the media after Saturday's scrimmage that redshirt senior walk-on Seth Strickland might be the leading candidate to back up Connor Shaw right now. Strickland seems to have the mental aspect of quarterbacking down, but doesn't have the arm strength to make the throws that Spurrier wants him to make. He's been very efficient so far in the scrimmages, completing 12 of 16 pass attempts for 97 yards with one touchdown pass and one interception. Dylan Thompson was expected to be the clear number two going into the spring, but neither he nor Andrew Clifford have done much to impress the Head Ball Coach.

Redshirt Freshman Tanner McEvoy came into spring drills with many expecting him to gradually improve throughout spring and fall practice with the hope that he would eventually overtake Thompson, Clifford, and Strickland as the clear backup to Shaw during the 2012 season. That expectation hasn't exactly materialized so far, as McEvoy has yet to convert his considerable physical tools into football skills. At 6'6'', 209 pounds, McEvoy is an exceptional athlete who enters just his third year playing quarterback, having previously played at wide receiver and safety for his high school team. McEvoy has a cannon for an arm, but he doesn't always know where it's going. That has come through in the spring scrimmages, in which he has completed just 7 of 18 pass attempts for 81 yards. If McEvoy can improve his throwing mechanics and overall accuracy, he'll have everything he needs to succeed in South Carolina's read option offensive scheme. The early returns suggest that he's still a long ways off, but there's no question that he has the most raw talent of any non-Shaw quarterback on the Gamecocks' spring roster.

*Part of the issue here may be the injuries to the offensive line that had the only returning starters from last year - T Mike Matulis, C T.J. Johnson, and G A.J. Cann - watching the scrimmage from the sidelines.