UPDATE: Voting on day two is closed (see results below). Click here to cast your vote for Day Three. 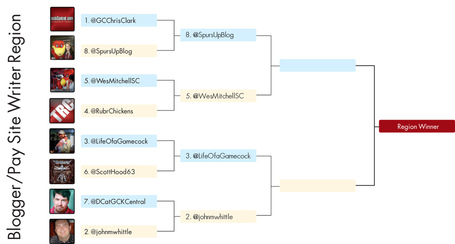 Day One of Garnet & Blacketology: The College Tworld Series showed us some things about how this silly little tournament might unfold. Five eighths of the Blogger/Paysite Writer region consisted of contributors to prominent subscription sites covering Gamecock athletics (The Big Spur, Gamecock Anthem, and Gamecock Central), but only one (@WesMitchellSC, in his defeat of @RubrChickens) successfully used his competitive advantage to trounce his opponent; the Rubber Chickens' lead evaporated quickly after GABA started receiving a lot of traffic from a Gamecock Anthem message board.

Gamecock Central, on the other hand, began the competition represented by three writers, but will enter round two represented by zero, following @Lifeofagamecock's narrow victory over @ScottHood63, @johnmwhittle's domination of @DCatGCKCentral, and @SpursUpBlog's inspiring upset over #1 over all seed @GCChrisClark.

Some excellent tweeters have already been sent home, but them's the breaks in the cutthroat world of #GarnetAndBlacketology. In Day Two, we'll shift to the Entertainment Region, which offers a most fascinating mix of characters, real and otherwise. 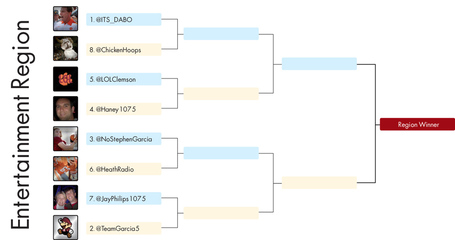 Click on "VOTE" next to each matchup to be taken to a page where you'll be prompted to select the superior tweeter.