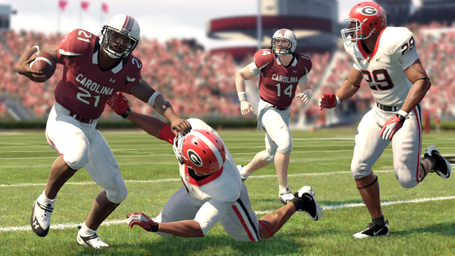 Oh man, oh man, oh man. We're precisely one day removed from NCAA 2013 hitting the shelves, then immediately flying off said shelves and into the consoles of the nation's sports gamers. If you're like me, you'll fish around for those complete rosters that some interspace hero has compiled. Then you'll download all the stadium sounds and customize the Williams-Brice stadium Gameday experience. Then it's six months of virtual gridiron glory.

I trust you've already boned up on NCAA2013's exciting new features in my COMPLETELY FACTUAL exclusive preview published a few months back. If you're interested in a decidedly more legitimate preview, Ben Haumiller, producer of NCAA Football 2013, took some time to answer a few questions about the Gamecocks' role in the newest edition of the much-ballyhooed franchise, as well as some general gameplay questions. Garnet And Black Attack thanks Ben for his time. Read on!

GABA: South Carolina's increased success has our fanbase gamers expecting increased visibility in the NCAA franchise. What sort of specific attention does South Carolina receive in the newest edition?

Plenty more after the jump!

GABA: One question our fans have been dying to know: will our official fight song ever show up in the game? (Our fight song, The Fighting Gamecocks Lead The Way, is adapted from a musical number and is therefore copyrighted. I suppose this would necessitate EA paying a licensing fee.)

BH: Fight songs are such a crucial part of the gameday experience, and it kills us any time we are not able to secure the rights to a school’s fight song to include in the game. We license songs for a number of schools, and over the years we have gained rights to some fight songs while losing rights to others, however there are some schools where for one reason or another we have never been able to come to a license agreement. Unfortunately South Carolina has fallen under that last group to this point, but hopefully one day a resolution can be met and we can include The Fighting Gamecocks Lead the Way in the game.

GABA: The Sporting News called the Gamecocks' famous 2001 pre-game theatrics "the most exciting pre-game entry in college football." In past years, the entrance has received very little in the way of customization, probably due to the fact it is based on a tunnel run-out which is the standard entrance animation. Has any further attention been given to Cocks' thrilling pre-game routine?

BH: The Gamecock run-out is the same as it was in last year’s game, however if you are looking for a more authentic experience you can utilize the Custom Stadium Sounds feature to set your pre-game intro music and have it play during the run-out as the Gamecocks take the field.

GABA: EA Sports ranks South Carolina as the #11 team in the game. What went into that decision?

BH: Every year we hold a roundtable discussion with the biggest college football fanatics in the building to determine our initial top 25 ranking. Our goal is to try to replicate what we think the initial AP poll and Coaches polls will look like when they are released closer to the season. Historically we average around 17/25 schools wind up within one spot of their real world ranking when the real polls are released. We discuss everything from returning talent, strength of schedule, and the "hype" around a school based on the various "too early top 25 polls" you can find. Putting all of that together we felt that the #11 ranking was where South Carolina would most likely wind up being ranked.

GABA: Regarding the game as a whole, many fans seemed to take issue with the defensive AI in last year's edition, namely the fact that linemen and linebackers swatted down passes over the middle at a rate that far exceeds reality. What changes will we see in the way defenses operate?

BH: the "Super Linebackers" and "Psychic DB’s" have led to a lot of frustration for gamers because players felt like they did everything correct, and then at the last second a defender would come from nowhere and knock the ball down without ever looking back for the pass. With the new Read and React Defensive AI system those are problems of the past as defenders now need to look at the ball in order to make a play on it. if you watch a defender in a replay you will notice their head tracking the flight of the ball as they watch the pass coming towards them, which leads to much more realistic movement by defenders since they can’t make a play on a pass they don’t see. Additionally, there are over 20 new pass trajectories in the game this year that allow you the ability to throw the ball at angles you’ve never been able to throw before allowing you to have that true "touch pass" feeling as you lead the receiver to the open spot in the defense.

GABA: The game features a variety of new animations, including QB dropbacks and sack evasions. Tell us a bit about how they'll factor into the game and what they'll offer in the way of enhancing gameplay.

BH: The new QB dropback animations are assigned to each play to time up with the receiver’s routes. You will see QB’s do the proper 3-step, 5-step, or 7-step drops, as well as 1-step drops for bubble screens and true screen drops where the QB takes a three step drop and then trails off as he sucks the defense in on the screen. So you no longer need to control the QB and drop him back 20 yards as you survey the field, just let the CPU control the receiver on the dropback and look downfield to read the defense and decide where you want to throw. To help with the timing of the routes you will see the receiver’s pass icons illuminate once they are looking for the pass. This doesn’t mean they are open, it just means they are at the point of their route where they are anticipating a pass to be thrown their way. The dropbacks are timed with the primary route so that when the QB hits their last step, the receiver icon will light up letting you know to throw it to them if they are open. For example, on a comeback route, the icon will light up right before the receiver is ready to make his break for the comeback portion of the route.

As for those receiver icons, just because an icon is not illuminated doesn’t mean you can’t throw the ball to that receiver, it just means that they are not ready to play a catch animation, so unless you want the ball to bounce off the back of their head or sail past them you will need to manually take control of the receiver and call for a catch.

GABA: Past editions of the NCAA Football featured enjoyable mini-games like pass skeleton, tug of war, and option attack. Those games were discontinued in recent versions. Are there any such side games available in the new version? If not, might we expect to see them return in upcoming years? (Note: Do it! They were so much fun!)

BH: While fun, the mini-games were discontinued due to lack of use by our players. For many, the mini-game experience didn’t resonate as a genuine football mechanic, and it detracted from overall realism. Once we removed the achievements tied to the mini-games we found that very few people routinely played them, so the decision was made to pull them out of the game.

GABA: Was there a special algorithm built into Clemson's AI that ensures timely late-season choking against middling ACC opponents?

Again, we thank Ben for his thorough responses. Looks like we'll have to wait at least another year to hear the fight song or see the pre-game Cocky reveal, glad to know we're highly regarded in this year's edition. And while I maintain the worth of the mini-games (my buddies and I still hold Option Attack tournaments from NCAA '06 on the reg), we can at least look forward to less pass breakups at the line and a generally dominant Gamecock squad. Let's hope the flesh'n'bone squad is able to live up to its digital counterpart.