Share All sharing options for: What's Cooking at GABA? The Bacon Explosion

Welcome to the first installment of the Garnet and Black Attack kitchen series. We're going to shine a little light on some cooking ideas that could bring some serious joy to the pits of your stomach. The week, we encourage to you meat up with The Bacon Explosion. This recipe actually made the rounds in an e-mail back in 2008 or 2009, and epitomized the "MEATNORMOUS" slogan from the Burger King commercials a while back.

There is some good news about this recipe. It's delicious, easy and with no veggies and all meat, it's kinda manly if I do say so myself. I mean.... Look at it. Behold the bacon. 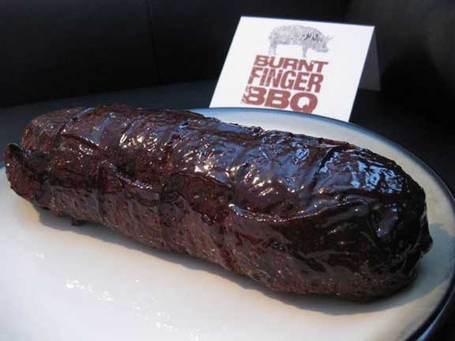 I should also state that I chose to share this recipe during the week of the Mizzou game because the guys from BBQ Addicts are from the Kansas City area and the only Mizzou fan I know told me here dad makes one of these things every Fourth of July.

Hit the jump for the details!

I would like to thank the guys from BBQ Addicts for creating this thing and also for letting me share it with y'all. I am shamelessly stealing some of their pictures, because I forgot to take pictures myself when I made it for the ECU game. Thanks again.

First and foremost here at the ingredients:

1 jar of your favorite barbecue sauce

1 jar of your favorite barbecue rub

To get start, you can either foil a baking sheet or lay down some foil or parchment paper on your counter top. Then take ten strips of your bacon and make a Five BY Five weave, after you have made the weave you want to generously cover it with some of your rub. 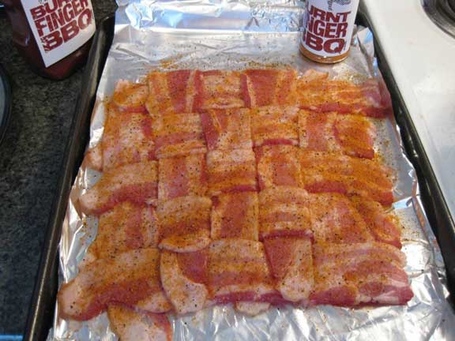 You should have some bacon leftover. Don't worry, we'll get to that in a minute. Next take your 2 pounds of sound and spread it evenly on top of your bacon weave. (side note: the first time I made this I foolishly went unnecessarily fancy and bought spicy italian sausage links and cut them open to use the sausage in the middle, it turned out great but was much more expensive than necessary. Do yourself a favor and just get 2 packs from the breakfast meats section). 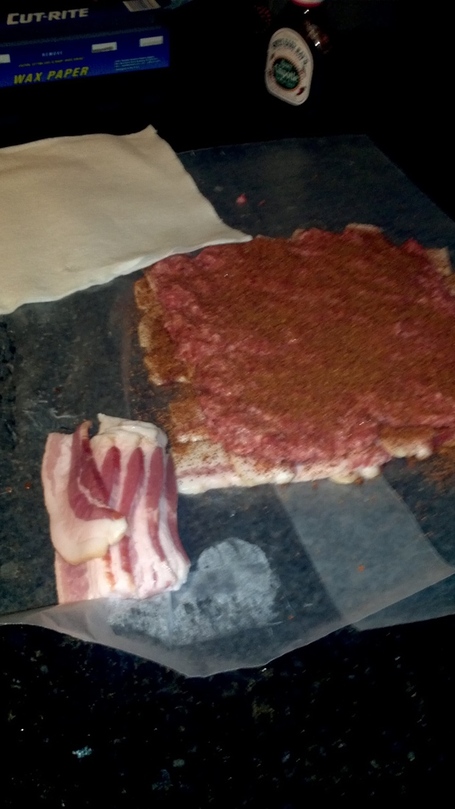 Both times I have prepared this, I have wondered if all two pounds of sausage would fit. Trust me, it will. Now, remember that bacon you have leftover? Now we're going to fry that up. Just like you would for breakfast, lunch, dinner or a midnight snack. Cook it however you would normally want it. If you want burnt to a crisp so the smoke detectors go off, go for it. If you like it medium so it's still rubbery, then undercook it so it's rubbery. If you want to bake it in the oven... well you could do that, too. Once it's cooked, you want to break into to bite sized pieces on top of the sausage. You can nibble on the bacon as you go, but as the guys from BBQ Addicts say, once it touches the raw sausage it is off limits. After you have evenly spread out the bacon pieces, generously apply some bbq sauce. Just kinda drizzle it all over and cover the bacon pieces. After that sprinkle on some more bbq seasoning. 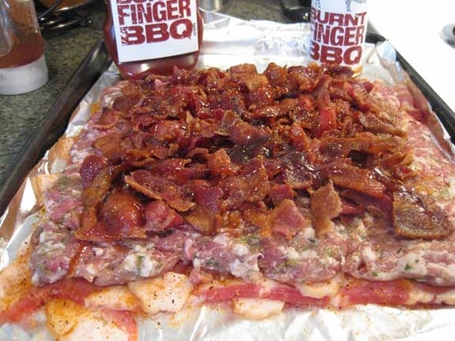 Next, you want to start at one end and peel the sausage away from the bacon weave and start to roll it into a log. Go nice and slow and try to squeeze out as many air pockets as you can during the process. 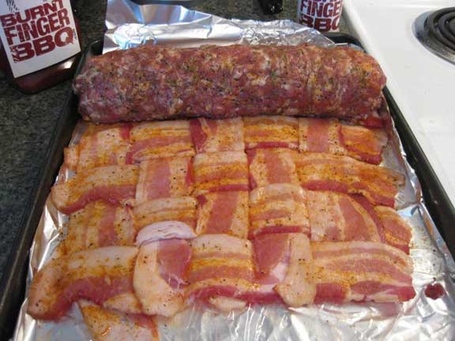 Next pinch the ends of the sausage roll to keep all the bacon and sauce and goodness sealed inside. Then you want to roll it back the other way. Starting at the end where the sausage is you roll it up so that the bacon weave will completely cover the outside. 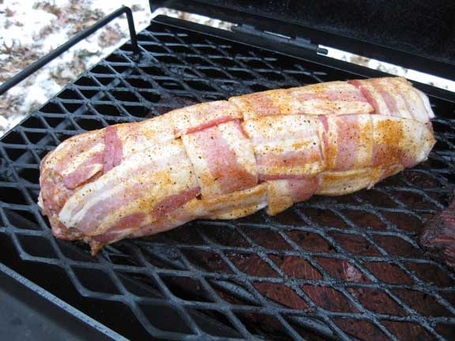 Dust the outside with a little more of your bbq seasoning and heat your grill or smoker to 225 fahrenheit. I personally don't have a smoker yet, and cooked my once over charcoal and the second time on a gas grill. Both times it was delicious. I imagine it would only be enhanced by some hickory smoke. Make sure to sit the bacon explosion on top of the seam to keep it packed tightly. You will need to cook approximately 1 hour for every inch or until your meat thermometer hits the appropriate temperature for pork: about 165 internal temperature. 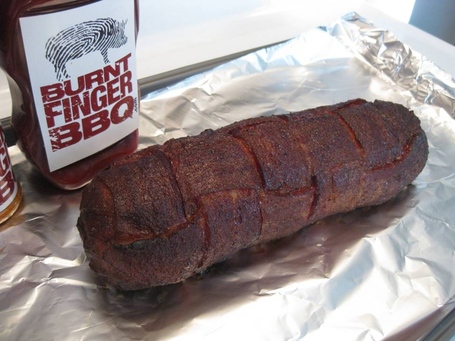 When it's all done cooking, you'll get a lovely crisp outside of the bacon and a nicely cooked sausage in the middle. Now for the finishing touches, the guy's from BBQ Addicts have some words of wisdom:

Now that our Bacon Explosion is fully cooked, we need to add some finishing flavors. Remember that barbecue sauce we used for inner flavor? We’ll be using that same sauce to glaze the cooked bacon weave. Using a basting brush, coat the entire surface with a thin layer of sauce. Sweet sauces are loaded with sugars, so they’ll give your fatty a nice glossy finish. Spicy and vinegar based sauces don’t contain as much, so they won’t set up as well. If you’re dead set on using those sauces, just cut them with a bit of honey and you’ll get the same effect. 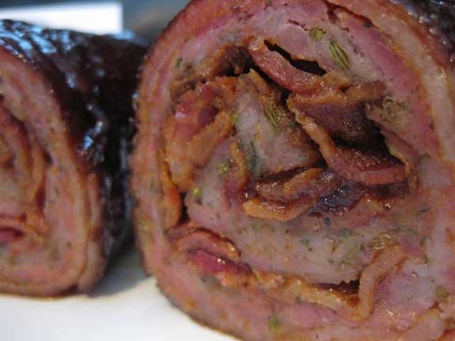 After that, you want to slice into half-inch to three-quarters of an inch slices and serve with whatever sides you have on hand. Grab a nice beer and watch some pigskin. With this week's game being a 3:30 game, you do the prep work Friday night or Saturday morning. Heat up your grill or smoker during Gameday and throw the Bacon explosion on just before the crew makes their picks and it should be ready just before we kick off against the Tigers. There are some variations, like adding onions, jalapeños or cheese; but, I haven't played around with that yet. It's good enough as it is.

Also, the holiday season is coming, and if you know of a grill or smoking enthusiast, you can order a pre-made and smoked bacon explosion from the guys over at BBQ Addicts. All you have to do is re-heat and eat.

So again, I want to thank the fine people of Missouri for inspiring the guys from BBQ Addicts to create something so darn delicious.

That's what's cooking at GABA, until next time.....