All your Tennessee-related questions, answered!

Wow, what a game last week!

Yeah, that was a pretty special performance by the Gamecocks, who were in desperate need of a statement game (at least their stress-addled fanbase did). Here are a smattering of interesting statistics pertaining to the massacre in Fayetteville.

I'm the type of fan who feeds off surface level impressions and whose expectations are reset on a weekly basis depending on how the team played its most recent 60 minutes of football, so I expect that we're going to put up 50 on each remaining opponent?

While last week proved that our offense is capable of scoring en masse, you've got to remember that our point total in Fayetteville was inflated by three Arkansas turnovers (two of which were flukey) and a smothering time of possession advantage. It's worth noting that Tennessee's turned the ball over more than any SEC team—although they also lead the SEC in turnovers created, thanks in part to a mindblowing five-turnovers-in-six-plays stretch by Western Kentucky's offense. Most advanced statistical rankings suggest Tennessee's offense is comparable to Arkansas', and Tennessee's near the bottom of the conference in time of possession. So for South Carolina to be successful in this game, it starts with making UT throw by stifling their solid rushing attack—UT is 5th in the nation in rushing S&P+ but 82nd on passing downs. If South Carolina's offense can continue to thrive with its churning and methodically balanced attack, it can put up points while gobbling up time of possession. So far this year, Arkansas' and Tennessee's defenses have performed similarly (67 and 62 in defensive F/+, respectively), so the offense won't face much more of a challenge than it did last week. So while 50 points is attainable if the chips fall South Carolina's way, it isn't really reasonable to expect it consistently due to the offense's rate of play. The question falls more on our defense and whether or not they're able to keep a run-first team off the field like they did last week.

Thanks! Although that doesn't make me feel all that great about the game. Tell me something that will.

Despite your impenetrable logic, Vegas favors the Gamecocks by 7.5, which has increased by half a point since the time of that writing. Also, we lost the digital simulation in horrifying fashion, which has actually worked out pretty well for us recently.

Look no further than our Crossing Enemy Lines feature, the RTT podcast featuring our own Gamecock Man, or this nifty Better Know and Opponent feature on Rocky Top Talk.

He did, and that's why he's our own fearless leader. Check out his responses to Will Shelton's questions here.

The other day I was riding my unicycle to the liquor store and it struck me that Connor Shaw never redshirted. While he's been an invaluable part of our team for at least the past three seasons, what if we'd redshirted him?

How interesting that our very own ChickenHoops addressed this very hypothetical earlier in the week. Incidentally, you should come to this blog more often. Do you realize every question you ask has already been answered via a full post?

Do you realize you're writing at yourself?

Much ado has been made of the Jadeveon Clowney / Antonio "Tiny" Richardson matchup. Thoughts?

Go read more about it here, but I'll add one thing: unless JD racks up multiple sacks or tackles for loss, you will, at some point, see a highlight reel of Richardson successfully blocking Clowney and as the disappointed commentators lament Clowney's failures as a football player. Book it.

Any auditory thoughts on this week's game?

Yes—as always, Half Cocked has you covered. Kyle (Chicken Hoops) is on this show and not me, which means you should expect less aimless rambling and more substantial, fact-based analysis.

While it's one of the darkest regrets of Gamecock Nation that we posted an L in our one matchup with a Kiffin-led Tennessee, we did score an arguably more important victory on the recruiting trail with Alshon Jeffery. He's currently a gas station pump attendant, yes?

Alas, apparently Lane Kiffin would make no better a guidance counselor than he did a head coach. Alshon Jeffery is currently a wide receiver for the Chicago Bears and is on pace for a 1,000 yard season. Incidentally, Lane Kiffin was recently let go as coach of the University of Southern California Trojans.

Followup question: can you take that irony/schadenfruede smoothie and whip it into a delightful photoillustration? 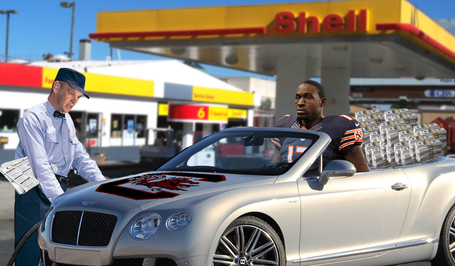 Alshon sure looks stoic and should probably strap down those fat stacks so they don't blow away. By the way, are we healthy going into this week?

We're as dinged up as any team halfway through a season could expect to be. If you take a look at this week's Auguste Report, you'll see six players with an averaging 3.3 Auguste Heads per. The Gamecocks could be without four starters: RG Ronald Patrick and DT JT Surratt are both doubtful. C Cody Waldrop reaggravated his ankle this week and will likely miss another week. Newly-minted starting safety Chaz Elder is out with a concussion. But linebacker Skai Moore should be cleared to sky more, and Bruce Ellington's foot doesn't look to hold him out. And, yes, Clowney should be on the bus again this week.

Can I have a song celebrating that fact? Preferably one by a legendary 1980s post-punk band?

Perfect. I think I'm ready for the game. Last question: given the choice, would you rather have seven or two threes?