A message board rumor about Steve Spurrier being drunk during Sunday's airing of the Steve Spurrier Show picked up unexpected legs with a handful of credible publications, and there are (at least) ten reasons that this is all so very stupid.

Share All sharing options for: Ten reasons the 'Was Steve Spurrier Drunk?' story is unbelievably stupid

1) There is really no reason at all to think that Steve Spurrier was drunk.

The argument that Steve Spurrier was drunk relies heavily upon the fact that Spurrier used the word "crap" and that he appeared to slur his words here and there.

"We gotta quit that crap if we're gonna be a good team this year."

That Spurrier described the play of his team in such a manner should come as surprise to no one. In fact, during Tuesday's press conference, he almost used the exact same phrase to characterize the linebacker play.

I asked Coach Botkin if we teach the knockout shot. He said, "No." So I said, "Well you need to get that linebacker to quit doing that crap because it makes us all look pretty stupid."

Are we to believe he was he drunk then, too?

What about when he described Jadeveon Clowney as "pooped" after the UNC game? Or when he said the South Carolina offense was "pooped around" during the second half of the 2012 Georgia game?

As for the slurring, that's much more subjective, but we do know that Spurrier is a 68-year-old man who coached a football game, flew from Orlando, Fla. to Coumbia, S.C., and filmed a television show all in the same day. I think he can be given a pass for being exhausted. But even if his slurring was a result of alcohol consumption, 1) it wasn't that bad and 2) he was still able to accurately recall details about player injuries and game scenarios from two weeks ago.

2) The decision to pull the show from the internet and rebroadcast on Fox Sports South was a terrible one.

The Steve Spurrier Show is such a forgettable program that the only way you would notice that something was amiss is if its handful of loyal viewers, who are people that don't mind sitting through the 25 minutes of local advertisements to hear 5 minutes of a fatigued senior citizen describing what he did at work that day, notice that the show has been pulled.

The kinds of people that dutifully tune in week after week are the kinds of people who have "their programs" and are damn sure going to complain if they don't show up on their TV when the thing on the clicker says they're supposed to. And just as concealing the shark from view until the third act of Jaws heightens the sense of terror one feels when watching the film, so did pulling The Steve Spurrier Show stoke the flames of the rumor mill.

CockyTalk.com is a message board where people include, without irony, Colin Cowherd quotes in their comment signatures.

4) Steve Spurrier not flatly denying that he drank on Saturday was not the best idea.

Steeeeeve. You were so damn close to killing this story dead in the water. But you left open just enough of a crack and, really, opened the door even further by being more honest than the situation required:

Asked if that was due to fatigue, Spurrier said, "I guess so."

When asked if he was impaired in any way, he said, "I hope not."

When asked if he had been drinking after the game, Spurrier replied, "Whether or not I have a few beers after every game for the past 29 years I don't think I need to get into all that. Most coaches that I know we probably do have a few beers after ballgames after building up all week and so forth. But that was a draining day and I got too negative. I don't like being that negative after a victory."

No one is a bigger fan of off-the-cuff, zero-fucks-given Steve Spurrier than I am. But this called for a dry statement of the facts, not the Head Ball Coach's folksy charm. It's hard to blame Spurrier for this, though. He probably didn't even realize that there were rumors about him being drunk and seemed genuinely surprised that it became a national story when he was asked about it after practice.

5) The athletic department should have gotten out ahead of this story from the beginning.

As I've already mentioned, pulling the show from air was a bad call in the first place, but failing to accompany that action with an explanatory press release is another example of the most basic public relations competency continuing to elude this athletics department. If a quick press release was sent out along the lines of "Coach Spurrier wasn't feeling well after the game and wasn't happy with the comments he made about the team," then this never becomes a national story, or at least prevents a situation like the one we had on Wednesday, in which hours and hours went by with people wildly speculating as to why the show was pulled.

Steve Spurrier has probably never heard of Deadspin and definitely has no idea what's trending on Twitter. It's the athletic department's job to get out ahead of these situations and prevent its most high-profile employee from this kind of public embarrassment. It's truly baffling that an organization with a department called Media Relations is so apparently oblivious to what's happening in the media.

6) The athletic department  should have prepared Steve Spurrier for his interview with Josh Kendall.

People like you and me who listen to every single Steve Spurrier press conference know what Spurrier meant when he answered the question of "Were you at all impaired?" with "I hope not." It's the same way he answers "Is Dylan going to be ready to play if Connor cannot go?" with "Boy, I hope so." But that answer was never going to play with national audiences, and the athletic department's failure to grasp the gravity of the situation and prepare Spurrier accordingly is concerning. Now, people are running with headlines like "Spurrier 'hopes' he wasn't drunk during taping."

7) Someone in the athletics department should have said, "Not quite good enough, Coach. Try again!"

You know what could put this story to an end at any moment Spurrier chooses? If he calls up any journalist at all and says, "I chose my words poorly. I absolutely was not intoxicated during the taping of The Steve Spurrier Show."

8) Let's say Spurrier was tipsy. Why on Earth do we care?

Suppose Steve Spurrier was asleep in his chair, mouth agape, Coors Original in danger of falling out of his hand and spilling on the studio floor. Would anyone have noticed? How would it have affected you personally?

9) The internet spends 364 days out of the year madly in  love with this photo of Steve Spurrier holding a Coors original. 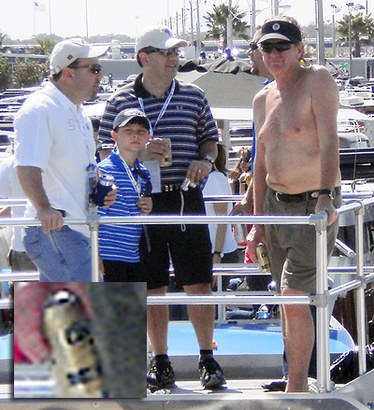 Why do we suddenly find ourselves clutching our pearls and exclaiming "MAH STARS!" at the idea of Spurrier drinking alcohol after a hard day of work?

10) The Steve Spurrier show is an embarrassment of a television program.

He would have been doing the viewing audience a favor if he showed up blackout drunk with his shirt off and his panky up. 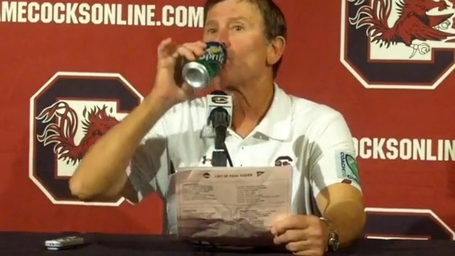