Gamecocks drop (but remain) in polls at 20th

Share All sharing options for: Gamecocks drop (but remain) in polls at 20th

In the recently released AP Poll and Coaches' Poll, South Carolina continued its streak of spending the week ranked as it clocked in at 20th in both polls.  Given their ranking and the method in which the Coaches' Poll normally operates, the Gamecocks will likely need to win away to the #7 Missouri Tigers if they hope to continue the streak another week.

Alabama continues to clock in at #1, with Oregon second, while the Florida State Seminoles climbed two spots to #3 on the strength of their pasting of the Clemson Tigers last evening.  Offensive line coach Shawn Elliot offered his thoughts on that game via Twitter: 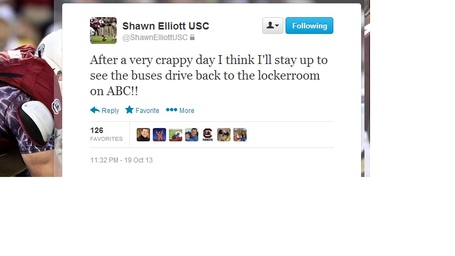 In other Twitter action, Mike Davis found the Gamecocks' new ranking to be unbecoming of the team:

Wow we dropped to twenty ??? Smh

Elsewhere in the poll, UCF checks in at #25 after they defeated Louisville on Friday night, while Clemson dropped to #10.  The Gamecocks don't have any other ranked opponents on the schedule aside from those three schools as of today - former poll members Georgia and Florida dropped out of the top 25 this week.