Gamecock players and coaches react to their 34-16 win over Mississippi State.

Obviously, our offense sputtered. It was not a good day for our offense. I think we need to go back to getting a little bit more physical in practice. It seems like we were a little too soft and we didn't do much.

On the struggles of the offense:

We couldn't run it very well, and we couldn't throw it very well at times. We hit a few good ones. We hit a few touchdown passes, but third downs we were pretty sorry and overall we were very sorry. Mississippi State had a good plan, and they got the best of our offense today. But it is a team sport, and our special teams played well, and our defense played very well and got all of those turnovers that sort of set us up.

Shaq Roland had an excellent game. I think that was the only two catches he had. We couldn't get the ball to Bruce Ellington today. You wonder why one week you can throw him 10 and then the next week you can't even throw it at him. But that's the way it was sorta happening today. They had a good plan. They didn't play a whole lot different than they've been playing, but they did have a pretty good scheme of things. They outplayed us. Out-coached us also.

On the play of Connor Shaw:

He played OK. He wasn't as sharp maybe as some of his games this year. But he felt fine. We had some bad plays on, too. I kept thinking at home here we'd be able to audible. But give Mississippi State credit of disguisin'. As soon as he'd pick his foot up, they'd change their defense and get into something that was good against the play we had on. We hit one little screen pass and then they covered the next one real well. Maybe it was just a game where they had a lot of good calls on and we didn't.

On Landon Ard's 17-yard kickoff to open the second half:

That wasn't a squib kick. That was a line shot that Landon just hit low. He kicked all the rest of 'em out of bounds.

Vic had an excellent game. Yeah, we gave Vic a game ball. He caught punts -- he and Pharoh. Pharoh did a good job in there. Knocked down a buncha passes, Victor did. Yeah, Victor's a good player. Stole the ball from the guy there at the end. So we gave a bunch of game balls to guys that got turnovers. We haven't been getting many. So if you get a turnover around here, you usually get a game ball.

I thought Vic played well. Vic has played well the last couple of games. We've put him in situations where he's know's he's going to be one-on-one without a lot of help. So I think his film study is better. I think he knows typically what type of routes he's going to get in the ball game, and I think he plays them.

On the five turnovers:

We were due. We haven't had a lot of turnovers this season. I think when you get better on defense and guys understand what they're doing, you play faster. And when you play faster, you can play more physical. Earlier in the season we didn't get a lot because we were very tentative. We had a young perimeter (sic) at the linebacker spot, but I think we're better fitting runs because we know what we're doing now.

On the Gamecocks' tendency to give up touchdown drives on the first series and then settle in:

I've tried to put my finger on why we sometimes start slow... That's been a focus for us. I don't know if it's having a lot of young players and they're over-emotional and things get going early and until they settle down we're better. So we've just got to come out and stay focused and not try to do too much early.

Sharrod had a great game starting out. They couldn't throw that bubble screen, which is a great play in their arsenal. It's just like a run for them. I thought he played very physical. He flew around and made some plays.

On what the Gamecocks did schematically to stop the Bulldogs' offense:

We went in the game to try and not let [Prescott] run the football. Most people who run the zone read with the quarterback, it depends on where you set your bubble whether he gives it or pull it. We always tried to make sure we had the three-technique and the five-technique to the side of the back so it would be a give read for him. But we knew they also had an inside power play that they run with him up inside. So a lot of the zone pressures that we ran were designed to take the ball out of his hands. 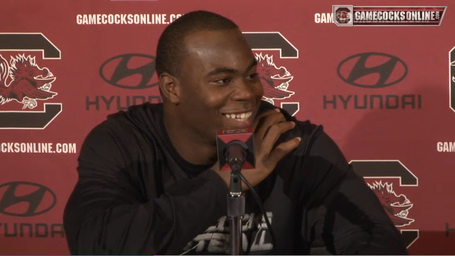 On his first touchdown catch:

It was man coverage, and it was an option route for me. I didn't see anyone inside, so I broke it off inside and made the catch.

Teams out there doing a lot of of chipping, triple-teaming, double-teaming, running away. I'm just out there to do my job. So if the ball is going away from me, just trail it backside. I missed a sack. I was kinda frustrated about that. I think I played a bad game. But I think it's going to come together a lot better than what it is.