Jadeveon Clowney's 'family issues' will be the subject of scrutiny, according to Sports Illustrated

The thinly-veiled prejudice pervading so much of the analysis of Jadeveon Clowney's 2013 season has taken an unexpected turn.

Share All sharing options for: Jadeveon Clowney's 'family issues' will be the subject of scrutiny, according to Sports Illustrated

He's lazy. His posse is getting in his ear, exacting a negative influence on his decision-making. He's more motivated by the prospect of a big payday than a genuine commitment to honing his craft.

These are all pretty entry-level stereotypes of African-American males and also things that are, according to his coaches and teammates, completely untrue of Jadeveon Clowney. (ICYMI, Jadeveon Clowney is a 6'7, 275-lb. African-American male.) But first-person accounts that contradict the prevailing narrative have done nothing to prevent legions of self-described NFL insiders from labeling Clowney a character concern whose background is replete with ominous red flags that are sure to make NFL general managers wary of selecting him with their No. 1 draft pick.

In most lines of work, handing in such a perfunctory appraisal of a multimillion dollar asset would get you shit-canned on the spot. Unfortunately, in the world of NFL Draft coverage, this brand of baldfaced bigotry passes as analysis and the half-baked opinions of old, racist scouts are credulously passed on as fact. The phenomenon is disappointing, to be sure, but for an industry that sees the Nolan Nawrockis of the world tear down player after player, year after year, based on little more than melanin, it's not surprising.

But over the past few weeks, a slightly more inventive talking point has emerged in the discussion of why NFL general managers might balk at taking Clowney. You see, Jadeveon Clowney has a "family situation."

What, exactly, is Jadeveon Clowney's family situation? Back in April, ESPN described it as such:

It's obvious that he hasn't forgotten his roots.

Clowney's voice softens when he mentions his mother, Josenna, who has worked at the same job at the Frito-Lay plant in nearby Charlotte, N.C., since she was 18.

"She's my motivation," Clowney said. "I told her she had about nine or 10 more months to work. Then it's my time to take care of her."

Heart-warming! Uplifting! Inspiring, even! But, you see, this was before Clowney was exposed as an over-hyped fraud. Eight months later, Greg Bedard of Sports Illustrated has used the same set of facts to reach an entirely different conclusion.

Clowney's background-he was raised mostly by a hard-working single mother after his father spent almost 12 years in prison for second-degree burglary-will receive scrutiny, but other draft prospects have come from much worse. Cowboys receiver Dez Bryant's mother had him when she was 14, and he had to live in several homes after her arrest and conviction for selling crack cocaine. Despite all that, and with some hard work by the Cowboys to supervise his activities and financials, Bryant has flourished.

The reason is that Bryant loves the game of football. He treated spring games in college like they were the Super Bowl, even as he got closer to the NFL. Evidence, and it is admittedly circumstantial, shows that Clowney is not the same breed of competitor.

Clowney's background will be scrutinized, Bedard tells us. Why? Because "he was raised mostly by a hard-working single mother." Let's give Bedard the benefit of the doubt and assume that he isn't an misogynist who thinks a single woman is incapable of raising a well-adjusted child on her own. If the concern is that Clowney's father committed and was punished for a crime, it would be a pretty reasonable one if there was any evidence to suggest that Jadeveon had inherited or was somehow haunted by his father's propensity for law-breaking, but there isn't. By comparison, Shed Diggs, the father of Clowney's teammate Jordan Diggs, is currently in jail for cocaine distribution, but the younger Diggs is widely regarded as having excellent makeup. So perhaps the best course of action is to judge Clowney based on his actions and not those of his father or anyone else who might sorta look like him.

Then, the fact that Clowney's mother raised him by herself while his dad did a 12-year bid somehow loops back around into a convoluted commentary upon Jadeveon's work ethic, in which Bedard aligns Dez Bryant's trajectory with Clowney's, using their upbringing as the control and Bryant's love of football as the independent variable. Let's ignore the bizarre speculation that Clowney lacks for a "love of football" -- football being the sport that no one is forcing him to play -- which is the sort of amateurish rhetoric oft reserved for mouthbreathing comment thread hyenas as opposed to paid analysts--the analogy's just a meandering disaster. The only real comparison he establishes is that both were raised by a single mother. There's also, I think, some sort of watery attempt to tie in Clowney's father's transgressions with those of Bryant's mother, but that really only serves to underscore the fact that Clowney and Bryant are, in fact, different people with different formative factors, no matter how easy it is to point and say "WELP DAD WASNT IN THE PICTURE SO THEY ARE THE SAME PERSON". And, for what it's worth, there seems to be a cavernous divide between Bryant and Clowney's personality, so maybe they just have a different way of going about their business. (Ah shoot, now we're speculating from a distance! Turnabout's fair play, I guess.) 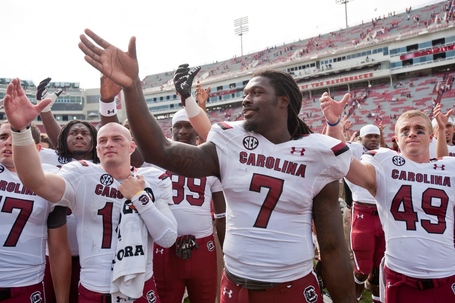 If you want to have a discussion about how Clowney has underperformed in 2013, I think that's swell. If you'd like to suggest that Clowney's drop in production is not solely attributable to nagging injuries and extra attention from offensive coordinators, then by all means suggest away! I don't claim to be anything even remotely resembling a well-qualified talent evaluator, so I'd love to hear your insights.

But if the only analysis that you're bringing to the table is to relay that Clowney possesses a set of superficial physical and demographic traits commonly associated with (but having no clear causal link to) undesirable behavioral characteristics, then maybe do something else instead.