A Lighter Shade of Garnet Presents: The Scrapped Rinaldi/Clowney Interview

Tom Rinaldi tells the story behind The Hit.

Share All sharing options for: A Lighter Shade of Garnet Presents: The Scrapped Rinaldi/Clowney Interview 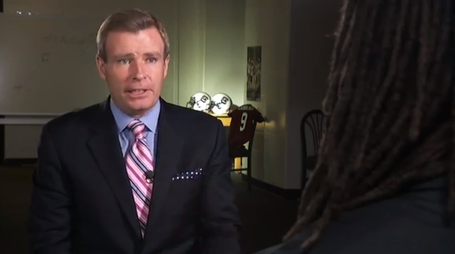 Tom Rinaldi: Jadeveon. [10 second pause] I'll set the scene. New Years Day. Pristine Tampa sunlight blankets the Outback Bowl. The temperature? Immaculate. The game is tense. Michigan leads, and they've just attempted a fake punt. It would appear they've fallen short, but the referee... [orchestral track falls into minor key] ...signals a first down. And there you stood. A grand 6'5", sporting the icy glare of some musclebound Sphinx and that healthy Rat King of dreadlocks spilling from your helmet's edges. You chose to confront this injustice within the bounds of play. You chose The Hit, Jadeveon. [10 second pause] Why did you choose The Hit? 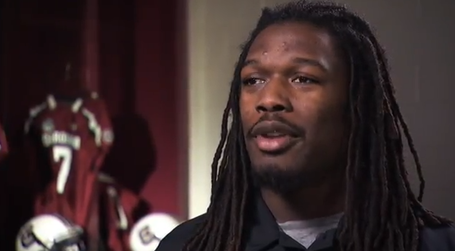 Jadeveon Clowney: Ah...yeah, you know, I just saw the opening and I knew I had to make a play, so I hit him hard. It was a pretty big hit.

TR: And when you found out you had carcinoma, what was your first thought?

TR: AHEM HERM COUGH Sorry, I asked, when you hit Vincent Smith, what was your first thought?

JC: Oh. I saw he fumbled, so I just wanted to recover the fumble, and I was able to do that. It was crazy.

TR: Jadeveon. [10 second pause] As you sit here, in front of these cameras, and these lights, and this reporter. Tell me this. Do you have carcinoma?

TR: [closes eyes, nods silently for 30 seconds] Let's move on. Over the past month, there's been a debate as to whether you should play next season. Some are suggesting that you should simply, not, play in 2013. That you'd be exposed to injury. That you could compromise your draft status. Jadeveon. Look at me and tell me the truth. Will you play college football in 2013?

JC: Yes, I will be playing. The way I see it, I could just as easily get hurt in a car accident or walking down the street, or... 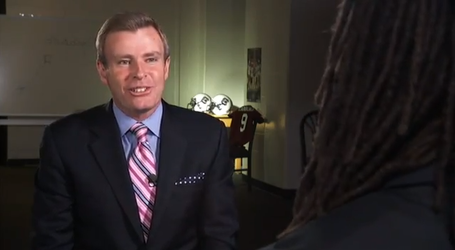 TR: Or you could get carcinoma.

TR: [to camera] And how much of that life remains, is hard to say.

TR: Jadeveon, let's talk about The Hit again. It has been more than two months since it happened, and yet it is still the top play on Sportscenter.

JC: I know, it's wild. LeBron James tweeted me, even.

TR: We have a copy of that tweet right here. 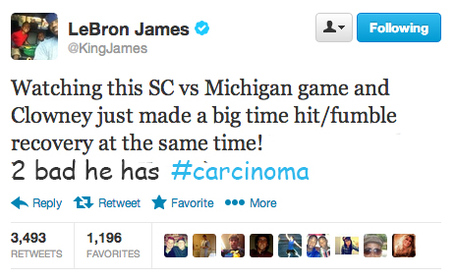 TR: Jadeveon, one last question. Can you say the sentence "I am not currently dying of carcinoma" just so we have it on record? And be sure to leave plenty of space between each word, so if we have to edit it for time or something, it'll be clean.

JC: You're going to make it sound like I said "I am currently dying of carcinoma", aren't you?

TR: CURSES. You know, we wouldn't even be here if Lattimore hadn't gone with NFL.com.