There Is a Jadeveon Clowney Lightswitch Cover

And I bought it.

Share All sharing options for: There Is a Jadeveon Clowney Lightswitch Cover

Today, our baseball team was eliminated from the postseason. Thus begins the year's only dead period, devoid of all relevant college sports.

With a month and a half separating us from the beginning of fall practice, what's a fan left to do other than cruise eBay for unlicensed team merchandise? My first search—"Gamecocks"—yielded mostly bottle openers and old programs and hideous T-shirts. So I decided to narrow my terms and see what eBay's legions had to offer in the way of Clowney. It's then that I stumbled upon my newest purchase. 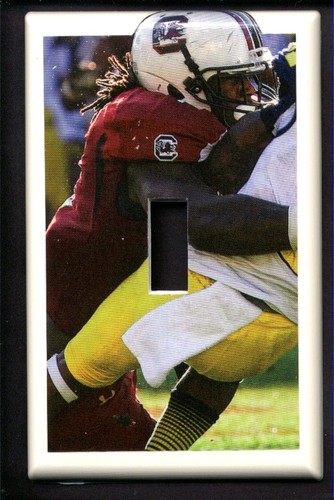 Do not adjust your monitor. You are in fact looking at "The Hit" in the form of a lightswitch cover. This is an item you can purchase and put on your house. Be reminded of Doo Doo's lights out display whenever you flick your lights on to make a sandwich, or take a shower, or open your garage door—wherever you decide to install it! Be it your mancave or den...oh, how about the garbage disposal? I can't comprehend the intensity of initiating a set of churning blades via a wallswitch surrounded by the image of Clowney's mythical blow. Pureeing your dinner scraps will never seem mundane again.

So I bought the thing, obviously. It was eight dollars, effectively blowing my switch cover budget for the year, which is not to say I wouldn't have paid at least ten times that. Want one of your own? Hop over to eBay and visit "Doug's Sports Store", where you'll find the Clowneyplate along with dozens of other models, including Babe Ruth, Michael Jordan, and famed athletic icons Miley and Billy Ray Cyrus.

For now, I patiently await my delivery confirmation, which one can only hope will contain the words, "Clowney cover comin'."