After a week off, we return! Let's dive right in:

I must admit I'm somewhat desensitized to all the uniform hooplah. By now the novelty of new uni reveals has all but worn off. Notre Dame could roll out a neon rainbow aesthetic with LED-lined helmets and I'd be like, "Huh, wow. So what's UNC's secondary look like? Kickoff's only a few months away." However, in the interest of attempting to answer your questions, I generally like what Under Armor has done for South Carolina over the past few years. I thought the cammo grays we wore in Baton Rouge packed a punch. As for other teams, I couldn't even tell you who's represented by whom. We all know Oregon is Nike and Maryland is Under Armor—but beyond that I'm pretty much helpless and content to be so. As far as matte helmets go, I'm all for them. I work in a field where the issue of matte vs. glossy surfaces is often raised, and I find that matte looks better about 90% of the time. So, bias acknowledged, but I'm a matte man and can't help but think helmets like these Arkansas lids are pretty sharp.

@anthonygoodroe asks, "If [Jerrel Adams] starts his route sprinting downfield but stops and turns back after 10 yards, is that called a "Jerell Curl"?

As long as an ankle-breaking juke by his tight end counterpart is called a "Busta Move".

@Heisman4Clowney asks, "As recruits, Clowney, Lattimore, Gilmore etc. helped change the face of the program. What recruit continues the trend?"

We have to consider that we may be in a different phase now. If this is high school, in 2007 we were the undersized pizza face on the quiz bowl team, but we somehow wormed our way to a seat at the popular kids' lunch table and avoided embarrassing ourselves for long enough to be accepted as a social commodity. (By the way, if you're wondering, that scenario is drawn from personal record! Except for the part about hanging out with cool kids. And not embarrassing myself. And being accepted as a social commodity. God I hated high school.)

Anyway, what these recruits have provided us—in addition to onfield dividends—is capital with which we can recruit quality players. We've at least temporarily erased the "you can't win at USC" stigma. What kind of recruit can help us maintain it, and then some? While I'm as excited about five star DE commit Shamiek Blackshear as any of you jokers, I'd say landing another elite offensive skill player in the next few cycles would help—a guy like Lattimore who everyone is after and who would come in and make waves early. It's all about clicking the refresh button on that "South Carolina Is Big Time" perception. Marquee recruits and the high level of competition that they generate is how we can do that.

@chickenhoops asks, "Bill Connely's rating system pegs us 19th. Too high? Too low? What're the numbers missing that make that the case?"

Num...bers. I'm not so good with those things and you know that! Based only on what I know about our team, the cache of hubris I've accrued since 2010, and my fierce aversion to doing the research that might prove otherwise, it's hard for me to believe that there are 18 superior teams in the country. Therefore I say that ranking is too damned high! After all, our slogan is "Top 10 Program". DO NOT DOUBT THE SLOGAN.

@chickenhoops was smart enough not to assume I'd provide any semblance of value in my answer, so he was sure to ping Bill himself. The prolific scribe would weigh in:

Bill then cited "The Clowney Effect" as his reason for putting excess faith in us in the face of his PRECIOUS NUMBERS. Although that was likely just a wink to his notion that JD will have everyone overestimating what we're capable of.

Kevin asks, "How do I know if I am/have been turnt?"

Have you experienced chronic spells of getting after it?

Have you found yourself grinding all the time?

When conceptualizing the offseason, have you ever concluded that there is no such thing?

If so, you may have been turnt. But not to worry—"turnt" is not considered a threat by the AMA. In fact, turnt deficiency is the bigger issue. If you think you're experiencing decreased levels of turnt, talk to your doctor about Turntlenol. 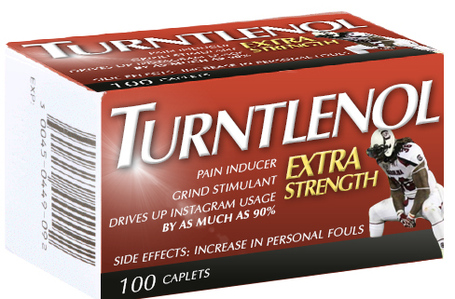 emoats85 asks, "If you could give Williams-Brice a facelift, would would you change or renovate?"

Connor steps in with his answer:

Until we take care of this, here are some ideas.

1. Widen the upper deck concourse or relocate the upper deck concessions. Do you sit in the upper deck? Have you ever gotten thirsty under the heat of the Columbia sun during a noon kickoff in September? Well, bad news, you're just going to have to die of dehydration because it is no more possible to access the upper deck concessions and/or bathrooms than it is for you, an average human, to run off tackle in the direction of Jadeveon Clowney without sustaining multiple fractures. The concourse is, I'm estimating from memory, about 20 feet wide and is interrupted by dozens of lines of people waiting to buy hot dogs and soda in commemorative cups and whatever else. All the while, masses of people—a large percentage of whom are drunk—are attempting to establish an impromptu two-way traffic flow.

2. Phone chargers under every seat and Wi-Fi access. It may seem frivolous, but just try getting separated from your friends during a game or have shoddy data reception prevent you from tweeting that hilarious Mark Richt joke you came up with.

3. Move the stadium on campus. Bluff Road isn't exactly Columbia's biggest selling point, and it's a major bumer that it's the only part of the city that some visitors get to see. And walking on he shoulder of Assembly Street is not afun or safe way to get back to your dorm.

4. I wish the North End Zone was closed in, but I suppose the Beast Board is an acceptable consolation prize.

@MeetMeAtTapps asks, "You've been offered a trade! Nick Saban for Steve Spurrier. Do you accept?"

Oh man, I just couldn't. I'm also the guy who bemoaned the Braves for parting ways with Greg Maddux and Tom Glavine even though it was clearly in the team's best interest to begin to cultivate a younger staff. I'd be a terrible GM, is what I'm saying. "Look, I know his numbers have trended downward for the past three years, but he's a really nice guy!" Yet in this scenario, I'd have an argument. Spurrier has us operating at as high a level as we've ever seen and has whipped the program into sparkling shape. Even with the allure of Saban's championship track record and recruiting prowess in play, would any Gamecock fan pull the trigger on this? I sort of doubt it.

@RubrChickens asks, "Answer the question you asked us: Gamecock tradition you could live without."

On last week's TRC Unleashed, Buck and the guys sized up our slate of traditions and tossed around a few that we wouldn't mind seeing put out to pasture. I'm with 'em on cheerleaders. Seriously, would anyone mind if there weren't a phalanx of grinning 19 year olds screeching "GO COCKS" every three seconds? No. You might, MIGHT, say "Hey, no cheerleaders. Weird." But that'd be about it. A few would need to be retained for flag-toting purposes, but beyond that, I say bag 'em. I could also take or leave the Cocky-in-a-box scenario, but it's fairly harmless and I'm sure the kids love it.

But enough about us—let's judge some other teams! Re: Clemson, everyone has the IMPORTANT THING WE TOUCH BEFORE THE GAME these days so that one's whatever. But I'll accept "running down the hill" as a viable tradition. Bias aside, it's exciting for fans without being obnoxiously esoteric, and it also gave us the first 15 seconds of this video, for which I am forever thankful. Who else? I am of the mind that Arkansas fans strain to fend off the reality that "Woo Pig Sooie" is the world's lamest cheer. Texas A&M's yells are fun, but the yell leaders should be herded into a rocket ship and blasted into the crab nebula.

What think you, readers? What traditions—USC or otherwise—should be extinguished? Add your comments below.

As always, submit your questions to gabamailbag@gmail.com or @GABAttack. Until next week, probably!