Hiding Spurrier's shame, USC's all-time hardest hitters, why the UNC game is worth fearing, and much more.

@TeamGarcia asks, "Which player will you miss most during the Gamecock Football twitter ban?"

I won't miss any because I adopted a no-follow policy for players on Twitter (other than Clowney, who never tweets anyway.) I used to follow 'em all, but my timeline became inundated the personal prattlings of dozens of teenagers with whom I share little in common aside from an affinity for the same football program. So now I abide by the theory that if a player tweets something worthwhile during the offseason, some journalist or paysite writer will let me know about it via retweet.

@MeetMeAtTapps asks, "What should we use to tastefully cover Steve Spurrier's genitals in the Garnet and Black Attack Body Issue?"

Now that the mag's elderly male barrier has been shattered, HBC's got the green light to let it all hang out in front of a camera lens—-not that he's foreign to such endeavors. But should he decide to participate, what object might serve as his proverbial fig leaf?

Leave your suggestions in the comment section. By the way, I'm horrified to see what kind of search terms will lead to this page based on the phrase "Steve Spurrier's Genitals".

@RubrChickens asks, "What is your position on alternative unis, and if USC went retro, what year would you choose?"

I'm fairly non-partisan when it comes to the uniform debate. I'm a fan of our recent uniform options, and I thought the battle grays we wore against LSU were a tasteful departure, but I think our best look is solid garnet all over. Given my ambivalence, calling upon uniform combos from specific years is something of a chore for me. So I'm going to go WAY BACK and choose these snappy duds: 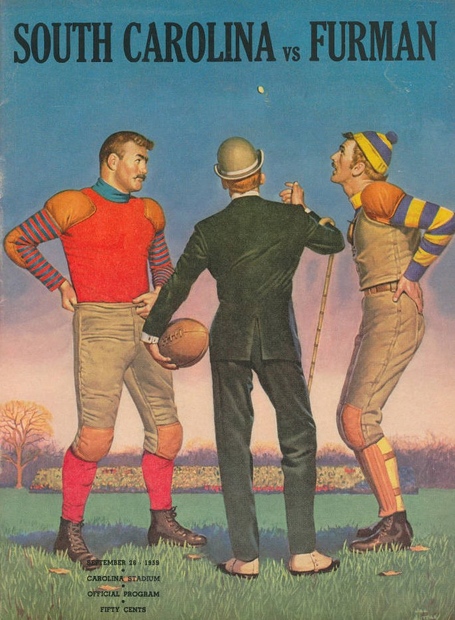 The splashy red top with its striped sleeves connected by brown leather jointpads says, "I am an agitated exotic beast—prepare for defeat!" But worry not, for the khaki safari capris remind everyone that you and the foppish referee have post-game plans to hit the malt shop and doff your caps at some of Columbia's most fetching debutantes. Also, helmets are for bitches. Huzzah!

@RubrChickens asks, "Why does the 'Black Magic' font appear to be bleeding/oozing both up and down. Do laws of gravity not apply to this font?"

There's a very technical explanation here, and that is because it is a stupid font no one should ever use. For my Professional Opinion™ on the failures of these Black Magic visuals, listen to this week's Half Cocked Show.

We have a special treat for you, Bourb. Special guest and noted authority on violence Buck from the Rubber Chickens gives he and Tbone's choices:

But after consulting Tbone, we decided three players stand out from the rest (even though we don’t agree with who’s #1). For me, in order, it’s Shannon Wadley, Jasper Brinkley and D.J. Swearinger.

We’ll start with Swearinger at number 3. History will be very kind to D.J., especially if he has the productive NFL career we all expect him to have. He is universally beloved by the Gamecock nation, and his senior season was filled with hard-hitting, penalty-getting, fumble-and-interception returning glory. If you don’t believe me ask Patrick Hearn (UAB), the entire Arkansas offense, or Andre Ellington. Ask this question again in ten years and Swearinger will probably hold the top spot.

At number 2 is Jasper Brinkley, the best all-around Gamecock linebacker of the last 20 years (and it’s not really close). Brinkley came to USC with his brother Casper as a JUCO transfer with extremely high expectations, and he lived up to them. On his first play at USC he delivered a bone-crushing hit to Mississippi State quarterback Michael Henig. (Full disclosure: Henig stayed in the game, but Brinkley came out for a play, so I deducted points.) Regardless, with Brinkley roaming the middle we could always look forward to a handful of big shots from 52.

And number 1 is Shannon Wadley. If you didn’t get a chance to see Wadley play, you really missed out. He rarely had a tackle that didn’t elicit an “oooh” or “aaah” from the crowd, and this hit on Arkansas’ Fred Talley would’ve been Clowney-like had dreads been in style in the early 2000s. I was at that game, and fortunately there was a brief lull in crowd noise when the play happened, and it sounded like a clap of thunder when Wadley hit him. The YouTube video is fitting in that it is grainy VHS and not super clear, and kind of gives the impression a crime has been committed.

Speaking of, Wadley had the greatest nickname of all time – “Bodybag”. I had not heard that nickname before and haven’t heard it since. Only one guy gets the name Bodybag, and that’s the biggest hitter the Gamecocks have ever had.

(Note: Despite “The Hit”, I did not include #7. Defensive linemen simply don’t get the opportunities to make plays at full speed the way LBs and DBs do, so it’s difficult for linemen to get a reputation as a hard hitter. And please don’t tell J.D. I said that. Seriously, please don’t.)

Jake asks, "I'm always nervous about the first game of the year. In my mind 2012 Vandy>2013 UNC, but I'm still a little uneasy. How concerned should I be for this year's opener?"

(Response from our own Connor Tapp, who, because of this game, has not slept since January.)

I think you should be very concerned about the UNC game, but then again I'm concerned about every non-Coastal Carolina game on our schedule because its in my nature and because games with weird start times, such as, on a weekday, always give me a weird vibe. I'm not exactly sure if my uneasiness is derived from a fear that I might not have time to go through my full complement of gameday rituals (putting on my garnet underwear, poaching an endangered tiger species, etc.) or because I think unusual kickoff times actually have an impact on the performance of the team.

There are, however, some actual football reasons to be concerned about the Tar Heels. Senior quarterback Bryn Renner has thrown for 3,000 yards in his two years as a starter and should take a step forward in his second year in Larry Fedora's Air Raid offense. North Carolina lost running back Gio Bennard and guard Jonathan Cooper to the first round of the 2013 NFL Draft but return potential NFL talent at tackle and center and complement Renner with a wealth of offensive skill players, headlined by leading 2012 receivers Quinshad Davis (WR) and Eric Ebron (TE).

(In case you don't read message boards, we somehow managed to let Davis, a Gaffney native, get scooped up by North Carolina despite a rich tradition of scooping up receiving talent from the upstate program. Everyone is upset about this.)

I highlight North Carolina's potency on offense because it's on the defensive side of the ball where the Gamecocks have the most uncertainty entering the season. We all know the whole the-Gamecocks-lost-their-entire-two-deep-at-linebacker spiel, so I won't recount it here. But suffice it to say that we'll learn a lot about the Kaiwan Lewis, Cedrick Cooper, Sharrod Golightly, TJ Gurley, and this team's ultimate defensive upside in game one.

Thanks as always, folks! Hit us up on Twitter or e-mail us to contribute to the next GABAbag.