And let's not overlook how weird all this is.

As far as weird and surreal moments in Gamecock sports history go, this has to be right up there.

Last night, Jadeveon Clowney—a current University of South Carolina student athlete who makes less than you—won the ESPY for "Best Play" for The Hit. It was one of sixteen plays that was up for the award, which was determined by a fan vote. Only the final four candidates were announced as nominees, which included three basketball plays alongside The Hit. Here's the whole thing. Watch it, and then let's talk about how weird it all is.

So let's review. Jon Hamm—star of one of the most celebrated television shows ever—introduces Olympic gymnast Gabby Douglas and Dodgers rookie Yasiel Puig. The pair is thrust onstage to introduce the award. Gabby does a serviceable job reading the hokey script. Yasiel Puig's bits are brief and unironic, his English is clouded by a thick Cuban accent, and he wears a look of subdued bewilderment as if not even he's sure that two months of historically brilliant baseball is worth all this hoopla. (If you're a conspiracy theorist, you might wonder if ESPN employee and Dodgers part-owner Magic Johnson had a hand in all of Yasiel's ESPY exposure. But you're not, so you don't give it a second thought.)

Anyway, they show the highlight package of all the plays before Gabby Douglas announces "Jay Devee Onclowney" as the winner. Clowney walks to the stage to the strains of a schmaltzy lounge rag, passing the likes of Terrell Suggs, Johnny Manziel and Joe Flacco along the way. My favorite part is Puig handing off the award to Clowney. They don't exchange a hearty handshake and bro hug, which is the standard interaction. It's as dutiful and impersonal as you'd expect from two fish out of decidedly different waters—"Uh, here," and "Uh, thanks". Clowney gives a brief, boilerplated acceptance speech and moves on.

Of course, the actual award was but a lone course of the night's banquet of insane takeaways. Clowney rubbed elbows with some serious starpower. LeBron James, for instance: 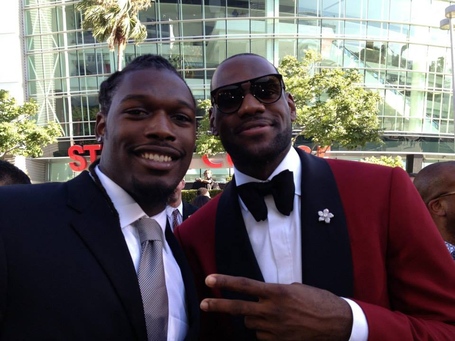 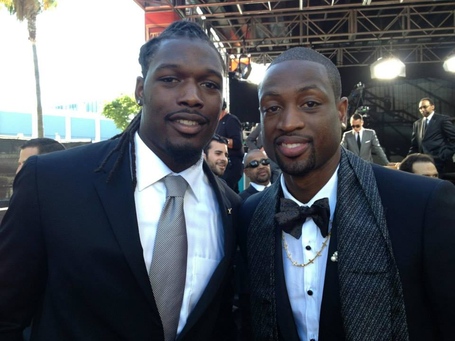 Clowney caught back up with Yasiel Puig in the ESPN photo booth. Not sure Puig really "gets" photobooths. 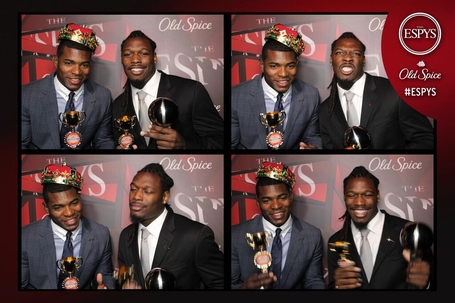 And sweetest of all, Jack Hoffman, the young Nebraska fan with cancer who won Best Moment for scoring a touchdown at the team's spring game. Hoffman's highlight toppled Jadeveon's from ESPN's Top Plays after a 40+ day reign. 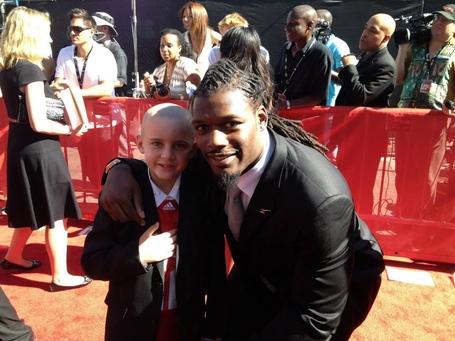 From what we can tell, Clowney handled the whole night in a dignified manner and represented the school well, despite it having to have been such a surreal experience. From a fan's perspective, I found it utterly wacky. I'm thrilled it happened, but it's the kind of night that college sports fans don't sign up for. Part of the charm and appeal of college sports is the ability to relate to these guys in some indirect way. None of us can know what it feels like to be LeBron James—a megastar from the beginning—but many of us can at least say we've walked some of the same campus paths and maybe even sat in the same classrooms as Jadeveon Clowney and all Gamecock athletes. It's a tenuous but genuine connection that fuels our dedication to the program. So to see a current South Carolina player strolling red carpets and posing for paparazzi is just plain bonkers. And all because of one transcendent play.