We're witnessing one of the greatest talents in college football history, but we can't stop looking for reasons to get rid of it.

Share All sharing options for: Our bizarre determination to have a 2013 college football season without Jadeveon Clowney

A report surfaced late on Monday that hip-hop luminary Jay-Z, who has recently begun to dip his toe into the world of representing professional athletes, is pursuing Jadeveon Clowney in hopes of becoming the superstar defensive end's agent once he declares for the NFL Draft at the conclusion of the 2013 season. By posting to Instagram a since-deleted screenshot of the blog post that contended that the two had been in contact, Clowney implicitly signed off on the veracity of the report.

Those are all of the facts that we have, and they do nothing whatsoever to suggest that Clowney has in any way compromised his eligibility to play college football. To render himself ineligible, Clowney would have to agree to a verbal or written contract or accept transportation or other benefits. While talking to one of the most famous musicians of all time, or a representative thereof, was no doubt very exciting for Mr. Clowney, the act of engaging another human being in conversation is not a violation of NCAA rules.

Here's what the NCAA's rules on agents do say:

[A]n individual shall be ineligible for participation in an intercollegiate sport if he or she ever has agreed (orally or in writing) to be represented by an agent for the purpose of marketing his or her athletics ability or reputation in that sport...

...[A]n individual shall be ineligible per Bylaw 12.3.1 if he or she enters into a verbal or written agreement with an agent for representation in future professional sports negotiations that are to take place after the individual has completed his or her eligibility in that sport...

...[A]n individual shall be ineligible per Bylaw 12.3.1 if he or she (or his or her relatives or friends) accepts transportation or other benefits from:

a. Any person who represents any individual in the marketing of his or her athletics ability. The receipt of such expenses constitutes compensation based on athletics skill and is an extra benefit not available to the student body in general; or

Again, there is absolutely no indication that Clowney has run afoul of these rules, and yet the spheres, Twitter- and blogo-, went absolutely haywire on Tuesday afternoon after getting their hands on Clowney’s Instagram post.

CFB is so clean. MT @DarrenHeitner: According to @InsideTheLeague J. Clowney in contact with Jay Z & will likely choose Roc Nation Sports.

What's fascinating to me is that the South Carolina compliance department's due diligence is being misconstrued as an admission that something illegal probably happened. That they are investigating the relationship between Clowney and Jay-Z is not an indication that anything improper has taken place but that the people who work in the compliance department understand what their job is.

It’s hard not to notice an apparent fascination with Clowney being somehow prevented from playing college football in 2013. From the baseless speculation that he would sit out a year to avoid injury to the slightly more valid concern that he could be ejected and suspended for a game because of the violent but heretofore legal hits he is known to deliver, we seem to be in constant search for the source of Jadeveon’s undoing.

I completely understand the Gamecock fan base having this mentality. We are a people living in a constant state of fear that every wonderful thing that we’ve ever had the good fortune to call our own will be cruelly stripped away from us when we are counting upon it most. We lost to a stunner to Navy in 1984 when we were within arm's reach of a national championship. Our head coach died in the middle of the football program’s best pre-Spurrier run in modern history. And most recently, golden child/program savior Marcus Lattimore twice had his knee ligaments ripped to shreds right before our eyes. 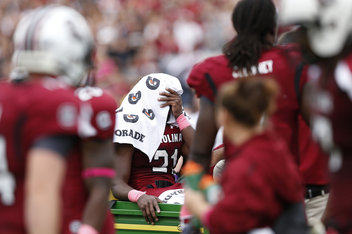 It’s easy enough to assume that the media’s obsession with Clowney not playing in 2013 is driven by ratings and pageviews, but does it make sense that they only take this approach with Clowney? Yes, Jadeveon is a generational talent, but others, such as Andrew Luck, have come close enough that they could have conceivably warranted this degree and kind of attention. Why is the hoopla so specifically geared toward the possibility that he won’t play in 2013? Why is it so impossible to assume that Clowney wants to play in 2013 and knows exactly what he needs to do and not do in order to make that happen?

"All of our conversations are, ‘Wait until you've played your last game as South Carolina.' When the bowl game is over this coming season, he's free to accept any amount of money anybody wants to give him. Until then, he has to be a student-athlete like all the other guys or he's not going to be eligible. He's done a good job of knowing that."

So until we have information other than "Jadeveon Clowney did something that is perfectly legal", we shouldn't have any reason to think that he either is incapable of understanding his coach's instructions or deliberately chose to ignore them.