The venerable sports weekly made big waves on Wednesday morning when they released a top ten that broke from conventional wisdom.

Sports Illustrated turned more than a few heads when they released their preseason top 25 today:

Though I can't claim to have read through all of Andy Staples' furious @ replies, I imagine the biggest points of controversy are Stanford being "too high" at #2 and Georgia being about six spots "too low" at #12. Maybe the complaints are valid, maybe they aren't. What we do know is that preseason polls are pretty terrible predictors of what the final polls will look like.

Is ranking Georgia 12th really that big of a slight? Can we be certain that Georgia won't have greater difficulty replacing nine out of eleven defensive starters than South Carolina will replacing its entire two deep at linebacker, or vice versa? Of course, we won't know for sure until they meet on the field, but let's just be thankful that we're spending today debating something more proximate to actual football than whether or not Jadeveon Clowney signed autographs.

SI also announced that players from the top six teams, including South Carolina, will be featured on regional covers. All indications are that Jadeveon reported to the photo shoot in better shape than the last Gamecock to make the cover of an SI season preview mag. 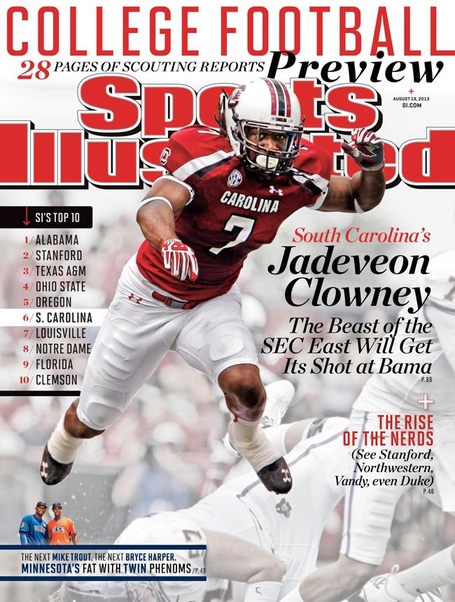 Also check out SI's preseason All-America team, which obviously features Jadeveon Clowney on the first team. Read their 2013 preview of the Gamecocks here.