Clowney returns to practice and the "W" in WLB stands for "welp".

The remainder of South Carolina's fall practice will be closed to the public because of the overwhelming player graph requests (both auto- and photo-), so thanks a lot now we have to get all of our fall practice news as filtered through the coaches and players in post-practice interviews. Let's assume that this Gump of a Gamecock fan is to blame and concentrate our anger in his direction. 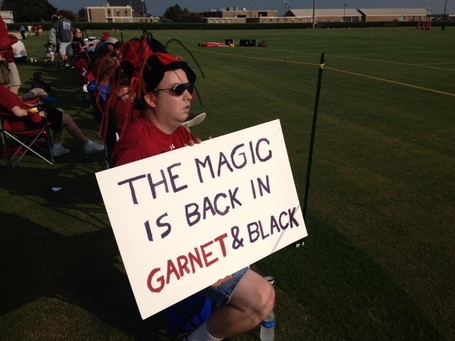 If there is a silver lining to be found in this development, it's probably that there will be much less hysteria over sled-flippings and Clowney taking routine days off due to a sore knee. Defensive line coach Deke Adams had this to say about his pageviews monster and star pass rusher:

[Jadeveon] just got a little banged up yesterday. But he's fine. Had a great day. A great practice.

On the differences between his coaching philosophy and that of his predecessor, Brad Lawing:

It's not really that it's different in the fact of gap responsibilities and things of that nature. It's just that I like to play a little bit more aggressive. I think Brad's style was a we're just going to tack and stay at the line and work flat and rattle down the line. And I like to play on the other line of scrimmage, play in the backfield. I like to try and make things happen.

A huge key for the Gamecocks early in the season is that Clowney and his fellow defensive linemen remain healthy and effective as South Carolina breaks in 5 newcomers to the linebacking corps' two-deep. Compounding their well-publicized youth on the second level of the defense, Cedrick Cooper, projected starter at weakside linebacker, left practice with his arm in a sling, causing Twitter to lose its mind.

"They're saying it's not that bad," LB Coach Kirk Botkin assured a breathless media contingent. "He hyperextended his elbow. He'll be out about three days, maybe a week. We'll know more tomorrow after x-rays and stuff. He just hyperextended it and it popped right back in."

With Cooper out of commission, at least in the near term, some of the other young defenders will see increased practice reps and potential role changes. Botkin singled out Skai Moore, Larenz Bryant, and Marcquis Roberts as guys who could see changes in their reps and/or positions.

"We'll watch film tonight and tomorrow and evaluate those guys and see what we need to do to shuffle them."

Second day in, he's still kinda swimming in some new terminology and learning new techniques that he hasn't done before. But he's moving around very well, and we're excited to have him.

The Gamecocks' next practice will be held on Tuesday night and, as previously mentioned, is closed to the public. If you have a solid 38 minutes to dedicate to buffering, you can go right here to watch the post-practice interviews yourself.