I won't be able to make it to this Saturday's sold out game at Williams-Brice Stadium, so someone please take my tickets.

All you have to do to have a chance to win these tickets is write a haiku about Big Blue Nation (#BBN) in the comments below.

For those who might be a little rusty, here's what Wikipedia has to say about the haiku:

The essence of haiku is "cutting" (kiru). This is often represented by the juxtaposition of two images or ideas and a kireji ("cutting word") between them, a kind of verbal punctuation mark which signals the moment of separation and colors the manner in which the juxtaposed elements are related.

Traditional haiku consist of 17 on (also known as morae), in three phrases of 5, 7 and 5 on respectively. Any one of the three phrases may end with the kireji.

I'll pick a winner by 12 PM EDT on Tuesday and contact you via email to let you know if you won. Because I'll need to mail them out pretty quickly, you're only getting until 6 PM EDT to respond with your mailing address before I move on to the next contestant. 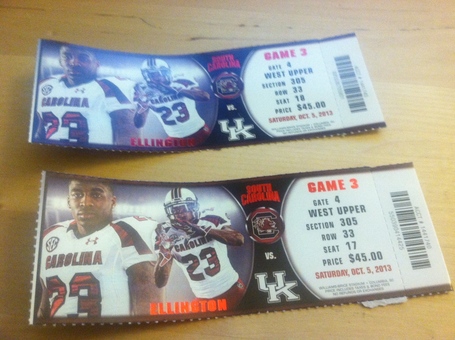