South Carolina hit two big plays last week on their way to victory - one a classic Spurrier play, and the other a classic run play. It sounds simple, but your best way to win is never scheme - it's having better players and having those players execute. And on Thursday night in Williams-Brice, on two plays, the Gamecocks did so in a way that got them quick points, which demoralized the North Carolina team that had to scratch and claw just to accumulate their measly 10 point total for the evening.

The first play was something that Spurrier's been calling for decades now: Mills. As the blog Coach Hoover shows here, this play is perfect to go against the quarters coverage that the Tar Heels dialed up, and which has become more and more prevalent in the game in recent years (Virginia Tech has made its living in part off quartersfor years).

The diagram of the play is below:

As you can see below, the Tar Heels line up in quarters coverage, with their safeties and cornerbacks responsible for one quarter of the field. The safety to Carolina's left-hand side sucks up to take away the crossing pattern over the middle, which leaves Shaq one-on-one on the outside against the North Carolina cornerback who likely thought he would have help if Shaq broke over the middle, given a safety was supposed to be lingering in that area. This is the purpose of Mills against Cover 2/4 coverage - make the safety choose which play to give you, and take it. And, we took it:

The other big play was Mike Davis' response to a lengthy field goal drive by North Carolina by responding with a 75-yard run that effectively salted away any chance of a Chapel Hill comeback.

This is as basic a run play as you'll ever see, and the Gamecocks blocked it up incredibly well, as Shawn Elliott acknowledged in his post-practice interview on Wednesday - every man was on the person they were supposed to be, and when that happens, typically you've got a chance for a big play.

A crude diagram of the play is below: 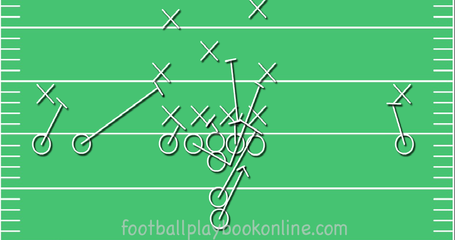 As you see (somewhat) above, this play calls for the weakside guard to pull and kick out the strongside linebacker. The fullback is responsible for the strongside end. The right tackle cracks down on the defensive tackle with some help from the strongside guard, who then leaves the double-team to take the middle linebacker. On the weakside, the defensive tackle is taken by the center and the weakside defensive end by the left tackle. Here, we also have a 3 WR set, which results in our two outside WRs being responsible for a cornerback, and our slot WR (Damiere Byrd) needs to give his best effort to stop the weakside LB from pursuing the play. If Mike Davis makes it to safety level, we're OK with the result.

The play works because, as Elliott said, the offensive line and the fullback get the job done, and six of the seven members of the UNC front 7 are blocked. The seventh (the weakside LB) is also taken care of by Damiere Byrd, who you see exhibiting his textbook blocking technique:

And after that, he's gone. Nick Jones does just enough to take out the CB and remind him that he really doesn't want to make this tackle. Meanwhile, both of UNC's safeties over-pursue toward the middle of the play, which means once Nick Jones takes out the corner, there's nothing stopping Mike Davis unless someone can catch him. Which won't be the backside pursuit corner, who's so disinterested in this play I can't even figure out who the WR is on top of the screen (it looks like Shaq Roland, but I can't confirm).

And as you know, no one does. The result was six points:

Now I don't typically subscribe to the theory that Spurrier "dialed it back" against North Carolina - I think he did what he had to do to win, and since we didn't need the offense as much as we might have had the Tar Heels converted a couple of opportunities into touchdowns instead of field goals or turnovers on downs (on four trips inside the 40, UNC scored 10 pts., or 2.5 a trip; on our six trips, we scored 27, or 4.5 a trip).

But the simpler answer is that Spurrier didn't try too many trick plays against North Carolina because he simply didn't need to do so, not because he was saving things for Georgia. If you can ever line up and run your base plays (along with a few constraint plays), and through talent and execution gain a bunch of yards and score a bunch of points, of course you're not going to get gimmicky along the way. If the offense is able to play as well on its simple concepts against Georgia as they did against Chapel Hill on these two plays, expect the Gamecocks to stay out of the bag of tricks, and instead just use their base plays to march through Athens, hopefully on the way to 2-0.