Georgia is Personal for Mike Davis

27 Gamecocks claim the Peach State as home, but for running back Mike Davis, this one is personal.

Share All sharing options for: Georgia is Personal for Mike Davis

This weekend the Gamecocks will be crossing over the Savannah River and heading two hours into the heart of Georgia where they will face off against the University of Georgia Bulldogs in a game that will most likely have major SEC East ramifications. However, while most of the team wont know Buckhead from Alpharetta or the difference in West and East Cobb County (or for that matter, even know what The Varsity is) there are twenty seven Gamecocks who will be returning to their native state.

Of the group, running back Mike Davis stands out as a player who is looking to up his game at Georgia and leave his own, personal mark in Athens. Davis attended Stephenson High School in Stone Mountain, located just on the east side of the I85 loop in Atlanta, where he ran for 3200 yards and 35 touchdowns. These impressive stats placed Davis at the top of his class as he was ranked the 3rd best overall player in the state of Georgia, and the 5th best running back in the nation during the 2011 cycle by 247Sports.com. However, after originally committing to Florida, he was little recruited by UGA, who instead focused their attention toward Todd Gurley and Keith Marshall - both out of state players from North Carolina. After his decommiting from Forida, UGA remained focused on Gurley and Marshall. This opened the door for the Gamecocks to move in and subsequently, he committed to South Carolina on January 13th, 2012 and enrolled that summer.

There is no arguing that Georgia made a good call in sticking with Gurley and Marshall, but the hype surrounding the explosive duo has only fueled the fire under Davis, and made the chip on his shoulder that much larger. In interviews Davis has been noticeably excited about the opportunity to come home and show the state of Georgia he is still the player they knew him as, and has mentioned that he is taking this game very personally. An article by the Post and Courier, quoted Davis as saying:

I'm showing all my emotions. It's a hometown game, UGA. I cant wait. I already have had guys call me and tell me they are going to beat us. I'm going to show all my emotions that game.

And who can blame him? He'll be going toe to toe with old opponents from high school, and all eyes from his home state will be fixated on his every move as he attempts to reclaim his throne. While the majority in Sandford Stadium will be hoping that the Georgia defense - who includes Garrison Smith, a former teammate of Davis - can play better against the run than they did at Clemson; and that Davis isn't the second coming of Marcus Lattimore, Davis is poised to show them what he can accomplish.

Other Gamecocks from Georgia:

The map below pinpoints where the individuals listed above are from: 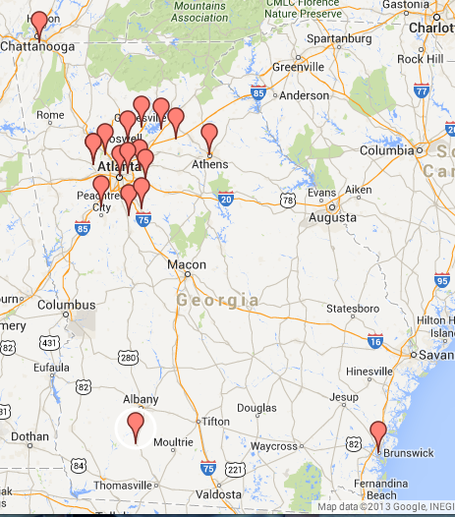