Thompson brings a little bit more to the table as a thrower, but will it be enough to outweigh what Shaw could do with his legs?

Share All sharing options for: Looking ahead to South Carolina's 2014 quarterback depth chart

How much confidence does South Carolina have in Dylan Thompson? He's replacing the best quarterback in program history and no one seems to think it's unreasonable to expect that the offense won't miss a beat. Sure, what Thompson does looks a lot different than what Connor Shaw did in his three years as the Gamecocks' starting quarterback, but the production should be about the same or better thanks to a potentially stronger supporting cast.

Entering Connor Shaw's senior season, the perception was that he was not as willing to take chances on downfield passes as his backup was--so much so that a vocal portion of the South Carolina fan base was advocating that he be benched because of it. In 2013, however, Connor somehow managed to balance an increased appetite for risk-taking with an incredible 0.3 percent interception rate. There's no question that Dylan Thompson is going to be picked off far more frequently in 2014, but he's still going to connect on a few more deep balls than his predecessor would have. (Heck, even Shaw would have difficulty replicating the insane 24:1 touchdown-to-interception ratio he produced in his final campaign.)

Though you won't see Thompson heroically extending drives on third down miracle scrambles (except for this one), expect the rising senior to be tackled for loss far less often. Dylan has always been better than Connor at avoiding sacks because he's content to throw it out of bounds instead of trying to make something happen with his legs. Still, Shaw was only sacked on 6.6 percent of his pass attempts--almost a 50 percent reduction in his sack rate from 2012. Thompson was sacked even more infrequently, getting dragged down in the backfield on just 3.2 percent of his pass attempts. With four out of five offensive linemen returning in 2014, there's no reason to think that figure won't hold relatively steady.

Dylan Thompson and everyone else

For the first time in two seasons, the Gamecocks will not have a battle-tested backup ready to take over if their starter gets hurt. Seniority suggests that redshirt sophomore Brendan Nosovitch would get the first crack if Dylan Thompson went down, but Steve Spurrier's quarterback rotation is nothing if not a meritocracy. Nosovitch is a more well-rounded athlete than redshirt freshman Connor Mitch, but it's worth keeping in mind that the latter prompted Steve Spurrier to write him a letter speculating that his talents were so extraordinary that they could have the effect of extending the Head Ball Coach's career by a season or two. 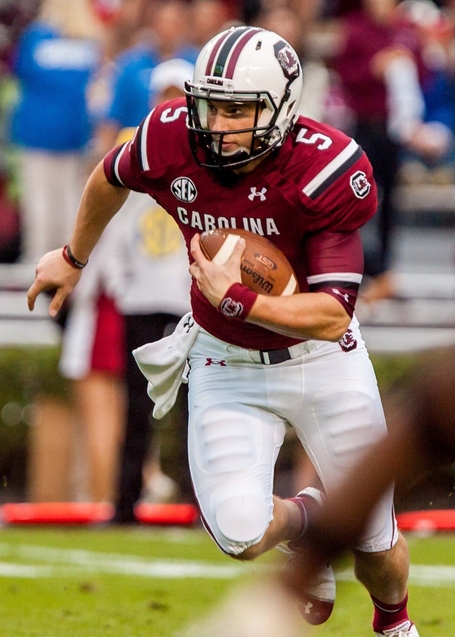 How much will the Gamecocks miss Shaw's, erm, clutchness?

The cold, hard stats suggest that there shouldn't be much of a drop-off from Thompson to Shaw, but it's hard to square that with what we all saw with our eyes. Connor had a knack for picking up just enough yards--often with his legs--in every crucial situation that the Gamecocks found themselves in. Dylan, meanwhile, threw the interception that woke Vanderbilt from the dead, came up two yards short on a third down scramble against Tennessee, and couldn't quite get things going against Missouri as the Tigers jumped out to a 17-point lead.

Aside from Shaw's escapability, there's the sheer mathematics of not having commit defenders to account for his explosive running ability. Thompson isn't completely immobile, mind you, but he's not the kind of runner who can consistently make second-level defenders miss. Thompson brings more to the table as a thrower, but will it be enough to outweigh what Shaw could do with his legs?

Will Dylan be able to keep the ball out of danger?

Thompson got away with many risky throws in his sophomore year that resulted in turnovers during his junior year (3.37 percent interception rate in 2013 compared to 1.6 percent in 2012). How well Dylan is able to protect the football could determine whether the Gamecocks finish another season as 11-2 also-rans or as SEC East champions.

Who gains the inside track for the starting job in 2015?

2015 will mark the first time since the the Smelley/Garcia quarterback battle of 2008 that it's not abundantly clear who South Carolina's starting quarterback will be entering spring practice. A quick look at the 2014 schedule suggests that there will be scant opportunity for Mitch and Nosovitch to get garbage time reps early in the season.

Uncertainty is stressful, y'all.