Drinketh From the Butthead Spurrier Cup

Share All sharing options for: Drinketh From the Butthead Spurrier Cup

Faithful readers know I'm something of a sports memorabilia collector, a hobby that's been impeded by my aversion to spending any significant amount of money on it. Thankfully, eBay has made it possible to acquire campy garbage at a bargain. You'll recall the Clowneyswitch, which now adorns my living room wall.

Recently, I scoured eBay for Spurrier-related curios. I parsed through seas of autographed items from all phases of his playing and coaching careers before finally striking gold. Behold, a Steve Spurrier Tampa Bay Buccaneers souvenir cup circa 1976—the only season he played for Tampa! It was the Bucs' inaugural season, one in which they went 0-13. The NFL Network deemed the Spurrier-led Bucs the worst NFL team of all time (although this predated the Lions' 0-16 campaign.) I loved this quote from the 1976 Buccaneers Wikipedia page:

Players began to meet for postgame parties at Steve Spurrier's house, in order to avoid having to show their faces in public.

"Laid another egg this week, din't we boys? Better lay low. Why don't y'all come on down to Chateau Spurrier. We'll get loaded and hit pitching wedges at the neighbor's Buick til Charlie's Angels comes on. Must be cold on that set, what with the way that Fawcett gal's always got the high beams on."

The Buccaneers' 338 yards of offense, a great improvement over their previous two games, coincided with coach McKay's relenting to Steve Spurrier's demands that he be able to call his own plays.

"Hey coach, how 'bout lettin' ol' SOS call the offense today, or are you currently winning a bet to raise the bar for coaching futility? I'm just askin'."

Anyway, here's the cup, which depicts a 31-year-old Spurrier's head in Mercator projection, thus making him look like Butthead: 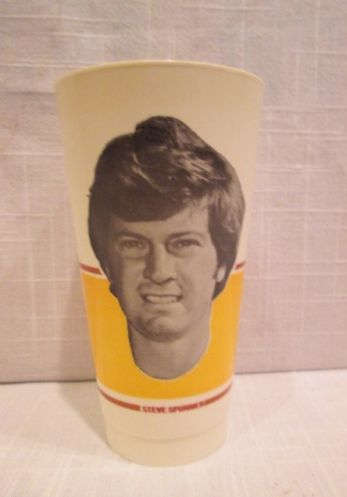 Also printed on the cheap plastic cup are Spurrier's vitals: 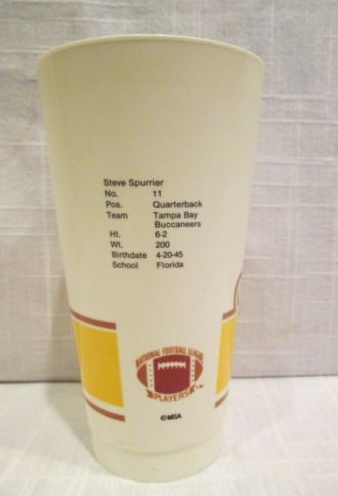 And finally, an illustration of Generic 1970s Quarterback: 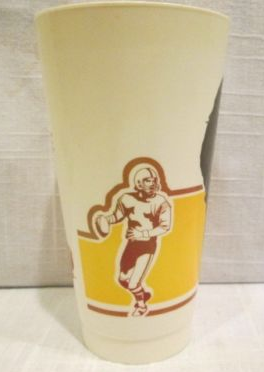 I was able to procure the item at a Buy It Now price of $9.99. A paltry sum for a unique and confusing gameday chalice!

Of course, the weirdest part of this item remains Steve Spurrier's skewed gourd, which results in a passing resemblance to Butthead. That being the case, please enjoy a new "Spurrier Did Something Awesome" reaction GIF: