The Bears' wide receiver became a bona fide NFL superstar in 2013, and Gamecock fans won't be terribly surprised to learn how that happened.

The Pro Football Writers of America selected Alshon Jeffery on Friday as the NFL's 2013 Most Improved Player of the Year. Jeffery finished his second year as a pro with 89 catches for 1,421 yards and seven touchdowns. Several of those 89 grabs were approximately as awesome as this one.

Two years removed from Jeffery's drop into the second round of the 2012 NFL Draft amid speculation about the Gamecock great's weight issues, Alshon is citing--surprise, surprise--conditioning and nutrition as some of the keys to his breakout NFL campaign.

Veteran wide receiver Brandon Marshall took Jeffrey under his wing and showed him how to train in the offseason and preached to him about the physical benefits that could be gained by using a nutritionist. Also, first-year wide receivers coach Mike Groh helped Jeffery refine his route-running ability and gave him the confidence to beat one-on-one coverage.

In other words, we're far removed from the Alshon who spent a good chunk of the summer of 2011 tweeting about Mexican food...

I want some mexican food today

@AJJeffery1 bro u tryin to go get the mexican food today

...and had difficulty squeezing into his South Carolina uniform. 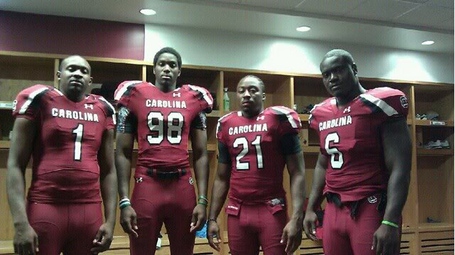 Just looking at this picture triggers the feeling of panic that ran through me when it surfaced in August of 2011. The Gamecocks were poised to build up on their 2010 SEC East crown--the Sports Illustrated cover with Fat Alshon read, "Best Gamecocks Ever"--and it seemed like Jeffery's apparent inability to stay in shape might be South Carolina's undoing.

Instead, it was something else entirely.