The Gamecocks' 2014 quarterback signee is coming to Columbia with his sights set on competing for early playing time.

Getting an offer to play quarterback for Steve Spurrier is kind of a big deal, especially when the Head Ball Coach picks up the phone and delivers the news personally. "It's definitely a surreal feeling," says Orange Park (Fla.) Fleming Island quarterback and 2014 South Carolina signee Michael Scarnecchia. "I've heard a lot of things where Coach Spurrier has only offered a couple of people throughout his career personally, so it's a blessing for that to happen with me."

That offer came on Oct. 15, at a time when Scarnecchia was committed to play his college football for the UAB Blazers. Five days later, Scarnecchia broke the news to the UAB coaching staff and flipped his commitment from the Blazers to the Gamecocks. "It was kind of an easy decision," says Scarnecchia. "We were really excited [when Spurrier offered], and then we were just praying and thinking about what we really want to do."

Scarnecchia and his parents had already visited South Carolina on Oct. 5, the weekend of South Carolina's narrow 35-28 escape against Kentucky. "I told my mom and dad when I left the stadium that it was probably the funnest and loudest game I've ever been to," Scarnecchia recalls. "They have a great fan base. The have great coaches. The atmosphere is just unreal. There's not a better fan base or a better stadium in the country. I felt really at home there. I just felt like I was part of the family, so it was an easy choice picking South Carolina."

The 6'3, 185-pound signal caller isn't sure exactly what it was that Spurrier saw in him that ultimately prompted him to pull the trigger on an offer, but he knows that the Head Ball Coach found plenty to like. "I know they told me I don't turn the ball over," says Scarnecchia. "I'm careful with the ball. He told me I'm smart with the ball. I have a good stature. I have a lot to throw it with. And he said I'm really coachable. I know that. And those are all positives for him that he saw in me."

"It's kind of like a relief," Michael says now that he's officially signed his National Letter of Intent to play with USC, "because you don't have to worry about anything happening between now and Signing Day. Since you've signed, you're now officially a Gamecock. You're part of them now, officially."

"But it's not really enough for me," Scarnecchia says. "Getting that offer and signing, it's great and everything. But it's just in the past now. I'm really working to get that starting job when I'm up there in my first couple of years and I'm just going to work for it."

"Getting that offer and signing, it's great and everything. But it's just in the past now."-Michael Scarnecchia

While South Carolina fans may have mentally penciled him in for a redshirt season followed by several years of climbing the depth chart, Scarnecchia is coming to Columbia with the mindset that he can compete for the role of backing up Dylan Thompson in 2014 before potentially taking over as a starter during his second year on campus. "Coach Spurrier pretty much said if I go up there and ball I could earn the backup job," says Scarnecchia, presenting a scenario in which Steve Spurrier uses the phrase "go up there and ball."

"You know, Dylan's going to be the starter," Scarnecchia acknowledges. "He's a great guy and a great quarterback, so I understand that."

Scarnecchia also understands, though, that it's most likely -- and probably better for his development in the long run -- that he won't be called upon to act as South Carolina's backup quarterback in 2014. "If I get that backup job, that experience on the field would be great," he says, "but I would want that extra year to learn everything and not just kind of sit the bench the whole year."

"So I'm probably going to redshirt, but hopefully if everything works out and I do real well and I outperform the other guys -- and that's going to come with hard work -- I could earn the starting job my second year."

Scarnecchia's current plans are to arrive in Columbia to start his South Carolina career at the beginning of June.

Editorial note on pronunciation: If you're a loyal reader of Garnet And Black Attack, then you are probably acquainted with our longstanding fascination with names. Scarnecchia is a name that, when you look at it on paper, seems like it's going to be a mouthful. But it's actually quite easy once you've said it aloud a few times. (Michael verified that the correct pronunciation is "scar-NECKY-uh.")

Still, the name is just complicated enough that I figured there was a decent chance that the Head Ball Coach has already  butchered it on numerous occasions, so I asked Scarnecchia if Steve Spurrier has abbreviated or screwed up his name in any particularly amusing ways.

"Sometimes he calls me Scar, but a lot of times he'll call me 'scar-nah-KEY-yah' instead of Scarnecchia. He does whatever he wants. He's earned it." 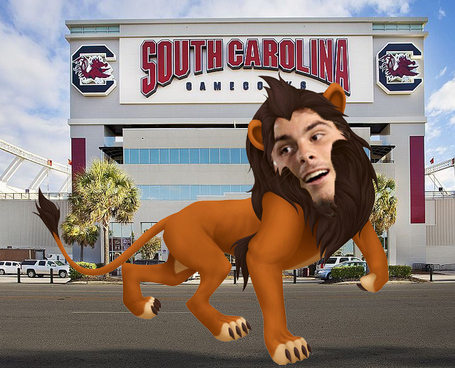