GITDAWERDOUT: A glossary of terms and phrases we've made up (with some help from our friends)

A beginners' guide to understanding Garnet And Black Attack's litany of in-jokes.

Share All sharing options for: GITDAWERDOUT: A glossary of terms and phrases we've made up (with some help from our friends)

I have lived with my girlfriend for six years. I can predict what she's about to say by noticing the faintest twitch of her forehead. Still, it often feels like we are separated by a language. Every day we forego entire conversations because telling her why I'm laughing at my phone would require me to explain far too much internet backstory. (e.g., "You see, AJ Cann's tweet was really funny because he's making fun of Shon Carson, who takes all of these selfies in which he is wearing no facial expression or shirt whatsoever.")

We compiled this glossary with people like her in mind -- Gamecock fans who have better things to do than be on Twitter every day.

We'll update this list as new terms enter the lexicon. (And if there's anything else you'd like to see us define, please avail yourself of the comments section.)

a banana and some grapes - The entirety of Jadeveon Clowney's caloric intake on the day of the 2013 season opener against North Carolina. Can be used to describe a state of malnourishment or having eaten just a small amount of food.

#AngelBoiSwagg - Most commonly used as a proper noun referring to South Carolina quarterback Dylan Thompson. Can also be used to describe a person sharing characteristics of Dylan Thompson, such as being disproportionately #blessed or awkwardly inserting Biblical messages into post-game press conferences or Instagram captions.

aww, definitely - an affirmative response, especially when delivered by Marcus Lattimore following a question such as "Do you prepare for Georgia the same as you would any other game?" 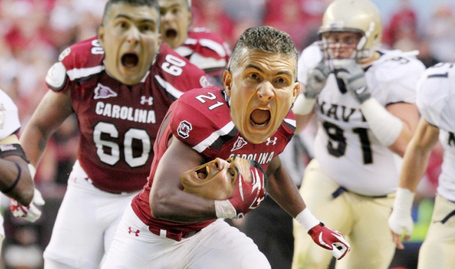 better to be about it than to blog about it - the battle cry of #SCVoice.

CROOTIN - the process of convincing young men to spend 4 years at South Carolina, while other schools spew lies and slander about our fine university. Origin unknown, but prominently used by some.

Freisman - A proper noun used to refer to South Carolina placekicker Elliott Fry. It serves as shorthand among the Gamecock football cognoscenti for communicating the objective fact that Elliott Fry is a perennial Heisman Trophy candidate.

gitdawerdout - a complete sentence and a command to disseminate information, esp. when delivered from a golf cart.

grinding football - the practice of working hard year-round, esp. to the point of diminishing marginal returns

inspirational tween - the Twitter style of Frank Martin, marked by a relentlessly positive message and popular txting abbreviations such as "8" in place of "-ate."

Linkin Ard - South Carolina kickoff specialist and out-of-boundsman Landon Ard, who kinda looks like he could be a member of Linkin Park.

#SCVoice - the self-appointed hashtag of Andy Demetra. (You are encouraged to help us in our quest to ruin this hashtag by affixing it to NSFW tweets.)

striving for relevance - the perpetual state of the person who elects to blog about it rather than be about it.

woo who? - Pharoh Cooper's response to being asked about the Arkansas Razorbacks' battle cry, and honestly the only reasonable answer to the question, "What do you know about Woo Pig Sooie?"

yyyyyup - an emphatic affirmative response, popularized by Mike Davis when asked if he knew he'd picked up his 1,000th yard of the 2013 season.