The Gamecocks look to put together their first three-game winning streak in the SEC in five years.

Share All sharing options for: Gamecock basketball looks to make it three-in-a-row in Fayetteville

After a solid month's worth of grief about not being able to close out close SEC games, the Gamecocks got right in their most recent two-game homestand with close, hard-fought victories over Vanderbilt (65-59) and Alabama (67-66), the latter coming just 48 hours after the former, thanks to snow inclement weather in the Columbia area.

Clearly this time can win close games, as the team's gone 3-3 in the SEC at home, with five of those games coming down to the wire, and the sixth a blowout victory over Texas A&M.  But as so often happens in sports, answering one question simply leads to another.  As they enter Fayetteville, can the Gamecocks win an SEC game on the road?

That differential can be explained by two factors.  First, the Gamecocks have faced Missouri, Georgia, Tennessee, and Florida on the road, while hosting Auburn, LSU, Vanderbilt, and Alabama (since they've played both Texas A&M and Ole Miss both home and away, let's ignore them for comparison's sake, since they wash).  If you remove the games those teams played against Carolina, the combined SEC records of the away teams are 28-16, while the combined records of the teams we played at home are 18-26.  Secondly, and fundamentally - home-court advantage exists.  We shouldn't be surprised we have it, too.

In Fayetteville, the problem persists - Arkansas, despite its 5-7 SEC record, is a pretty damn good basketball team.  The Hogs get up-and-down the floor as fast as just about any team in the nation, with offensive possessions that only average 15 seconds in length (the NCAA average is 17.9).  Expect a lot of points in this game simply because you can expect a lot of possessions.

As the match-up chart shows, the Gamecocks may struggle in two rather important areas offensively - getting shots (by avoiding turnovers) and making shots.  Given how quickly Arkansas likes to get into its offense, turnovers play right into their hands, and Carolina needs to figure out a way to avoid them if they want a chance to win. 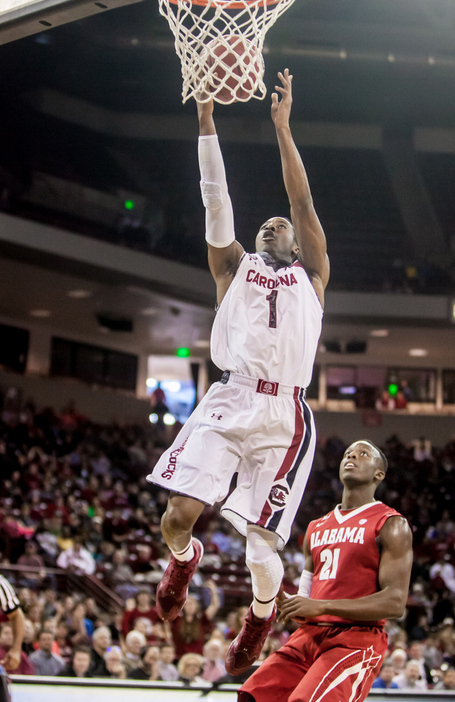 Of course, if the Gamecocks can avoid them, they'll get into their key advantages - offensive rebounding and getting to the foul line.  South Carolina excels in both areas while the Hogs struggle in each.  Last season, these two teams came in with similar profiles and the Gamecocks waxed Arkansas by 21 points in Columbia, despite Carolina turning the ball over on over one-quarter of its possessions.  If they do that again on Wednesday, they'd better grab about half their offensive rebounds and shoot over 60% from the field again, or else the Razorbacks could dominate.

When Arkansas has the ball, they aren't particularly interesting in how they choose to score except for the speed at which they try to score.  As such, they should be able to take advantage at times of Carolina's weaknesses when it comes to rebounding and fouls on the defensive end.  They also don't normally turn the ball over a lot, which is the one defensive area where the Gamecocks actually excel.  If the Hogs aren't turning the ball over, expect Carolina's defense to struggle mightily in Bud Walton Arena.

South Carolina will continue to rely heavily on Sindarius Thornwell and Brenton Williams offensively, as those two have combined for 48.5% of Carolina's points in SEC play so far this season (205 and 196 of a total of 827 points, respectively).  While it's obviously somewhat worked, a third offensive contributor seems necessary for Carolina to really get rolling.  Against Vanderbilt, Duane Notice stepped in by scoring 10 points (though he needed 13 shots), while against the Tide the Gamecocks rode an array of contributors (four players scored between 6-8 points).  Jaylen Shaw was one of those four in only 17 minutes, and could potentially give the Gamecocks the third scoring option they really need to take the pressure off Thornwell and Williams.

As for Arkansas, the quick pace they play at dictates a deep bench, and it's not uncommon for 9 players to see at least 10 minutes in a game.  The Gamecocks will likely worry most about the Razorbacks own five-star freshman, Bobby Portis, a 6'10" center who averages 13.2 points per game.  South Carolina will also need to keep an eye on Rashad Madden, a wing that shoots 43% from downtown and has also averaged 13.2 per game, with 3.5 of those coming from the free throw line, a worry for the foul-prone Gamecocks.

The Gamecocks and Razorbacks tip off at 9pm ET on Wednesday evening.  The game can be seen on CSS where available.