The four-star linebacker's trip to Athens has given him something to think about.

Bryson Allen-Williams' commitment to South Carolina has been said to be as solid as they come, but the four-star linebacker's recent trips to Tuscaloosa, Ala. and Athens, Ga. have put the strength of that commitment to the test. Allen-Williams left his official visit with Alabama last weekend saying that his tour of Nick Saban's program had given him "something to think about," but any concerns that the Crimson Tide would flip the 6'1, 222-pound linebacker were assuaged by a phone call to defensive coordinator Lorenzo Ward that seemed to calm things down.

That meant that South Carolina just had to survive the Ellenwood, Ga. native's Jan. 31 official visit to the home-state Bulldogs. From the moment Allen-Williams arrived in Athens, he appeared to be having a good ol' time with head coach Mark Richt.

On Saturday night, Allen-Williams tweeted "STW," which presumably stands for "shock the world" and is something recruits frequently tweet in advance of an announcement that they believe will surprise the public. (They are frequently incorrect in this belief.)

Then on Sunday afternoon, Allen-Williams appeared to be back to his old ways, taking to Twitter to encourage the nation's No. 1 women's basketball prospect to commit to South Carolina.

From there, the No. 8 outside linebacker in the 2014 class finished his weekend by watching the Super Bowl with Mark Richt, during which time he sent out the following tweet--one that is sure to keep Gamecock fans on edge of their seats until his National Letter of Intent comes across the wire on Feb. 5.

Off Twitter till Wednesday .... Need some time to think ✌️😎

Allen-Williams' ominous tweet was followed by one from his mother that painted a picture of internal conflict. (Then again, I appear to be at odds with most of the internet about what ellipses should be used to convey.) 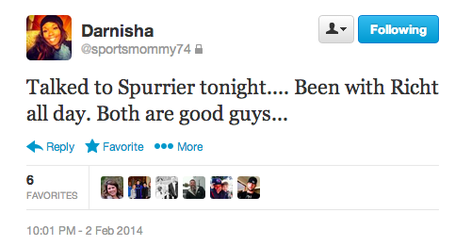 Hmmmm. WHAT DOES IT ALL MEAN?

Just for fun, I removed Bryson Allen-Williams from South Carolina's recruiting class using 247Sports' class calculator, and the result was that the Gamecocks' class fell from 23rd to 32nd, right behind Arkansas.