At 1-7, the Gamecocks' SEC record looks worse than even the porous 4-14 mark it ran up in last year's regular season. But underneath, there's signs of improvement.

South Carolina suffered yet another frustrating loss on Saturday, falling 75-71 in Oxford to an Ole Miss team tied for second place in the SEC with a 6-2 in-conference record.  The loss dropped the Gamecocks to 1-7 in SEC play so far this season; combined with Auburn's surprising two-game winning streak last week, South Carolina finds itself in last place, behind lackluster outfits that include those Tigers, Mississippi State, and Texas A&M.

A brief look at the numbers from that game, as well as from SEC play thus far:

As Connor described in his write-up, South Carolina lost this game because they just turned the ball over way too much, especially in the last 10 minutes, as Ole Miss stepped up the pressure.  While the "learning to win" line may come out, the bigger issue is simply a need for improvement - without Tyrone Johnson around to protect the basketball, it fell to freshman Duane Notice, on the road and in a hostile environment, to protect the basketball.  There's no reason to think he won't improve at that skill as he spends more time at Carolina, but for now, he's still not far enough along for the Gamecocks to withstand that type of pressure on a regular basis.  It's frustrating because it's a close loss, and somewhat worrisome because it's now on film.  Expect more press from opponents in the future.

There were a number of bright spots for Carolina throughout the day, led once against by Brenton Williams, who paced the Gamecocks with a solid 23-point outing in his 34 minutes.  Sindarius Thornwell continues to take on most of the possessions for this team, and played nearly every minute of the game, all the while doing enough good things (6-11 from the field with 18 points, 5 rebounds and 6 assists) to somewhat mitigate his 6 turnovers.  Duane Notice shot well from the field (5-9 for 11 points), but his 8 turnovers in 34 minutes were just too many for the guy who handles the ball every trip up the court.  Those guys will get better, but for now, it's really hurting Carolina.

Yet, despite the worse record, the Gamecocks have shown clear improvement in conference play during the second season of the Frank Martin era.  Let's look at the breakdown of SEC games by points per possession - how many points your team averages on an offensive possession, and how many they give up on every defensive possession.  When we order the conference this way, we see a very different set of standings than the ones you see when you simply use wins and losses: 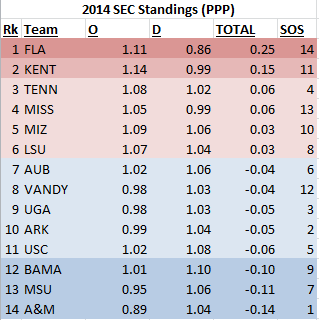 Now look at the same standings for 2013: 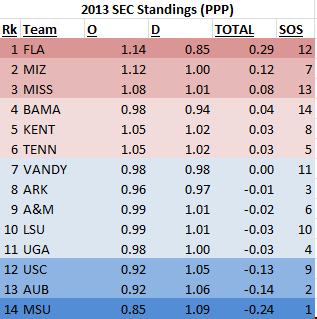 Underneath the tough losses lies a team that's improved by quite a bit over last year's squad, despite the fact they've currently played a tougher conference schedule against a tougher conference.  With winnable games coming up against Auburn (twice), Mississippi State, Georgia, and Vanderbilt, it shouldn't surprise folks if USC ultimately comes through conference play with a better record than they did last year.

Even if they don't, expect their conference strength of schedule to hold roughly at this level, while other teams - most likely Auburn and Vanderbilt - fall back a bit as their conference schedule toughens up.  The idea that the Gamecocks could come through the SEC with the 8th-best PPP would represent a marked step forward, and a far better leading indicator of what to expect in 2014-15 than what will ultimately end up being a very weak SEC record.

With most of their coin-flip games behind them - two tough Ole Miss losses, as well as close defeats against LSU and Texas A&M - South Carolina will either be moderate favorites (Auburn, Vandy, Alabama, Georgia) or decent underdogs (at Tennessee, Arkansas, and hosting Kentucky and Florida) the rest of the way.  Only at Auburn and Mississippi State represent true 50/50 games, and while they'd both be nice to win because it's always nice to win, we're somewhat past the point of the season where wins and losses are what drive the narrative.  At this point, we want to do right by Brenton and see progress that we can build on going forward.

Despite the injury to Tyrone Johnson and the departure of Bruce Ellington, the Gamecocks took a step forward this season, even though it likely results in a worse overall record due to a markedly more difficult non-conference schedule (Ken Pomeroy rated last year's OOC schedule as 342nd best in the nation; this year, it's 166th).  Adding two top-200 recruits in TeMarcus Blanton and Marcus Stroman, along with returning nearly everyone from this year's team, means we can expect more progress next season, as Martin continues to improve the program.

The team is close and getting closer to breaking through into that next tier of the SEC - the middle tier.  That's where outside shots at NCAA runs and guaranteed postseason play become a reality, the clear next step in the re-build.  With improvement on the interior - either through recruiting or development - there's no reason to think that the Gamecocks won't move up to that level next season.

The 2013-14 Gamecocks haven't been a lot of fun when it comes to wins and losses, but if your goal for the season was to see improvement from year 1 to year 2, we've got it.  With 10 games left in the regular season, the goal is to see that improvement turn into more wins than losses.  Carolina finds itself with a great opportunity to grab one of those wins on Wednesday, as 2-6 Auburn comes to Columbia.  We'll have that preview up later this week.