The three-star defensive end has either telegraphed his National Signing Day choice or is employing the art of extremely subtle deception to throw us off his trail.

Share All sharing options for: Blake McClain lists University of South Carolina as his current school on Facebook

Three-star defensive end Blake McClain, perhaps in a fit of late-night enthusiasm for pursuing his post-secondary education, has updated his school information on his Facebook profile to indicate that he is currently attending the University of South Carolina. The only problem with this is that McClain is currently committed to the Nebraska Cornhuskers. 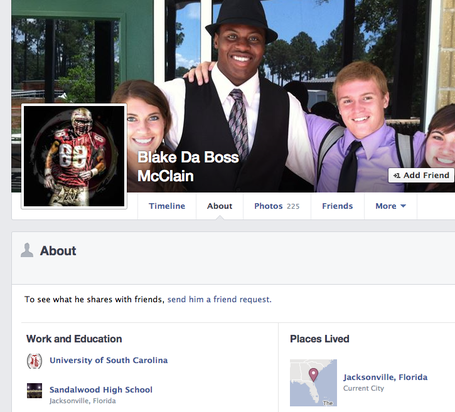 "Be careful what you put on Facebook" is normally just annoying advice that your parents give you so that you'll take down that photo of yourself doing a keg stand at a party with some townies that summer between sophomore and junior year. But in this case it appears as though it might have actually had real world consequences. Sort of.

The most damage this could possibly do is tip McClain's hand nine hours earlier than he wanted to as to which school he will sign with. Of course, it's also possible that he's attempting to lead us down the wrong path using extremely subtle tactics. After all, Facebook is nothing if not hotbed for wanton passive-aggression.

And, if you'll notice, his profile picture is an artist rendering of McClain donning the uniform of the school from which he decommitted last week. Of course, the probable explanation is that the kid just hasn't had the right lighting to take a decent selfie in the intervening five days since he reneged on his pledge to Florida State, but if we're reading too much into subtle details on his Facebook page we might as well read into all of them.