Share All sharing options for: The South Carolina Recruiting Constellation

Perhaps you've seen Good Bull Hunting's delicious interactive SEC recruiting map. We at GABA highly recommend you go play around with it and enjoy its majesty. Perhaps in doing so you'll notice what I did: South Carolina's recruits plot out in a curious manner: 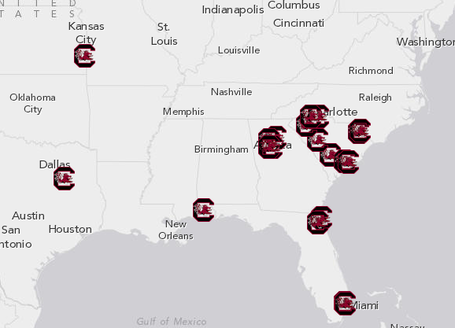 Maybe I'm a bit of a closet conspiracy theorist, but something struck me as downright deliberate about this layout. As one might expect, we see a cluster of South Carolina recruits and a decent confluence of Atlanta area players. A few from northern Florida, one from southern Florida. Then we see a few outliers: Taylor Stallworth from Alabama, Jhaustin Thomas from a Texas JUCO and Abu Lamin from a Kansas City JUCO. These three form a westward dogleg (!) that, stitched with the typical eastern cluster, resembles something. Something familiar. Where have I seen this shape before?

After a few minutes of focused study and prayer, it hit me like a barrage of range balls:

And to think HBC is criticized for not having enough of a hand in recruiting. To that I say balderdash! Spurrier Recruiting Truthers Unite! It's all a lie! Clowney was a Venusian! The 5-peat was staged! They're putting Coors heavy in the drinking supply! THE TRUTH IS OUT THERE AND SO FORTH!